It may be surprising that Trump is still at 62 percent to win the nomination despite all of the doom-and-gloom in the press about him failing or not wanting it. But, Trump has 742 pledged delegates to Ted Cruz's 529 and he is about to go on a roll.

He is heavily favored in New York, Connecticut, Delaware, Maryland, Pennsylvania, and Rhode Island. He has a 98 percent likelihood to win in New York on Tuesday, April 19 and an 84 percent chance to win with more than 50 percent of the vote. The more socially liberal Republicans in the Northeast shun Cruz (he did campaign in Iowa on his dislike of New York values) and Republicans have not rallied around John Kasich as an alternative (his huge loss in Wisconsin limits his value a strategic vote).

He may win on the second ballot or more (there is a 50 percent likelihood of a second ballot). The current rules only allow candidates who have won the majority of delegates in 8 or more states. If that holds, Trump and Cruz will be a tight fight between two men that are not liked by the establishment. The reason that Paul Ryan was falling hard before he dropped out of shadow primary and John Kasich has been falling is the increased probability that this rule holds. If there is a clear two-person race for months, it is going to be harder for the rules committee to toss out this rule and decide per a person that did not run at all or just won their home state. Currently within the 50 percent chance there is a second ballot: Cruz has a 30 percent chance of winning, 12 percent for Trump, and 7 percent for Kasich. That makes the conditional probability of victory in a second ballot: Cruz about 60 percent, Trump about 25 percent, and Kasich just 15 percent. This conditional probability has held steady for weeks. 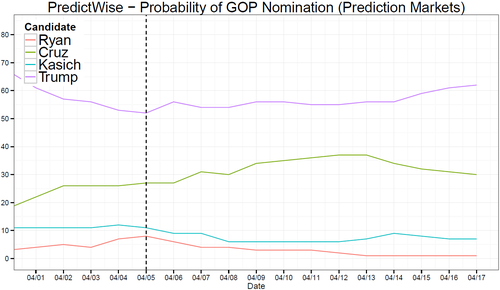 Hillary Clinton lost a little steam as she loses primary after primary, but she is favored in NY at 92 percent and all five April 26 primaries. If that holds, she will have the nomination basically finished before Sanders roars back with a few wins in early May. 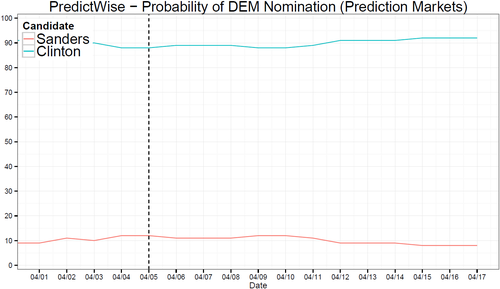 The Democratic nominee is now up to a 74 percent chance to win the general election. The Democrats have a 59 percent chance to win the Senate. And the Republicans are 88 percent likely to hold the House of Representatives. On February 1, 2016 the Republicans controlled two or three branches of the federal government (Congress and Supreme Court). Right now they control 1.5 of three (Congress and one-half of Supreme Court). By February 1, 2017 the modal scenario among these forecasts has them controlling just 0.5 of the three branches (one-half of Congress).