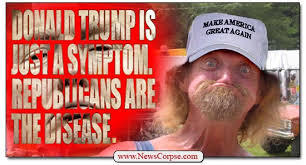 Many in the media are appalled at the derogatory remarks GOP presidential presumptive nominee Donald Trump makes against Hillary Clinton, former President Clinton, women, and many ethnic and racial groups of Americans. However, I wonder if they have seriously examined the underlying views of Trump's Republican supporters. It appears that Trump is reflecting the views of his electorate and political supporters about the rest of the American society. Perhaps we should not blame Trump for his foul, derogatory and unpresidential language against people and groups he does not like and who are critical of his views. Conceivably the blame lies with his cheering section.

During the 1950s, Senator Joseph McCarthy initiated a witch hunt for communists in the federal government and among Americans in all walks of life. It had gone unnoticed for some time by most responsible observers. But finally a courageous anchor newsman, Edward R. Murrow, in March 1954, exposed the Senator's attempt to humiliate many honorable Americans and to damage freedom of expression and activity enjoyed by all Americans.

One of the most memorable statements Murrow made in support of his case against Senator McCarthy's tactics and quoted by David Sheldon of Poynter, was, "He didn't create his situation of fear, he merely exploited it--rather successfully. Cassius was right. 'The fault, dear Brutus, is not in our stars, but in ourselves.'" The same situation is applicable in Trump's presidential campaign. He is thriving on the fear, anger and suspicion of government of his supporters. Hence, it is time for them to look at themselves in the mirror, to consciously and cognitively examine who is exploiting whom. If they look carefully they may realize that Trump is not interested in their well-being but rather in his own lust for power and promotion of his brand.

Trump is also exploiting polarization of the electorate based on rumors he spreads in the news media. Experimental evidence reported by Cass R. Sunstein, in On Rumors, shows that internal group deliberations further strengthen members' belief in rumors. Trump's rumors, such as Muslims celebrated 9/11 attack on World Trade Center, Mexicans are rapists and murderers, Vince Foster may have been murdered during President Clinton's administration, Senator Cruz' father's hand in JFK assassination, and Hillary Clinton desires to repeal Second Amendment are ignored by his supporters in his quest for the presidency.

Such rumors breed suspicion and even contempt against various ethnic and demographic groups and even against other presidential candidates who are supported by those groups. As psychologist Daniel Kahneman, former Nobel Laureate in Economics, states in Thinking Fast And Slow, "A reliable way to make people believe in falsehoods is frequent repetition, because familiarity is not easily distinguished from truth. Authoritarian institutions and marketers have always known this fact." Mr. Trump takes pride in his skills in marketing and branding but not in policies. Policies are left for the experts.

What about the media's role in Trump's campaign? Jacob S. Hacker and Paul Pierson in Winner-Take-All Politics are of the view that news media are not helping voters by providing vital and reliable information on the candidates and their policies.

"The erosion of traditional interest organizations has meant that for many voters, the media are the only regular source of political information... Even hard news consists mostly of dueling sound bites. Efforts to analyze the veracity or relevance of these claims, or place them in context, are either left to the end or left out altogether."

These remarks are especially applicable to most television news. The Internet has not filled that gap either. In fact, the Internet has contributed to the speed and durability of rumors.

Why have Trump supporters, and presumably responsible Republican politicians, forgotten their basic principles of Republicanism and are supporting Trump? Speaker of the House Paul Ryan emphasizes conservative principles such as "big tent," smaller government, and entitlement reform every time he gets the opportunity before the media; but even he is wavering in his principles and hinting tacit support for Trump's presidency. Is it conceivable that many of Trump's supporters secretly believe in what Trump is overtly saying, zeroing in on his supporters' inner thoughts, such as fear of immigrants, minorities, off-shoring of businesses, China's unfair trade practices and loss of respect for America in the world?

According to Tax Foundation, October 2012, 60 percent of households now receive more federal transfer income than they pay in taxes. Obviously the Republican Congress has not been very faithful to its principle of small government. The Republican electorate in Southern states also does not practice its explicitly expressed concern about big government. Out of the top ten states receiving disability benefits under SSDI, seven are in the South.

Trump's contemptible inflammatory language, and his vindictiveness against those who do not agree with his ever changing inconsistent policies and statements is a reflection of the cognitive dissonance of his supporters. It is time for his supporters and Republican politicians to look at themselves in the mirror and find their true self and not Trump's image.