Many Republicans as well as Democrats are horrified at the possibility of a Trump Presidency. It's not only because of his blatant racism, which he makes no attempt to hide. Or his complete ignorance of foreign policy. He has advocated the arming of Japan and Korea with nuclear weapons--which coupled with his unstable personality that a biographer has labeled psychopathic, makes him a dangerous psychopath.

No, it is because with his slogan Take Back America, he wants to disunite the United States of America. This is when America is already divided--by race and economic opportunity, for starters. Trump seems to want to take America back to a time when we were a divided country--to the Civil War.

He is taking advantage of the fact the U.S. Civil War is still being fought in many, particularly southern states, where African-American and other minorities are dis-proportionally prevented from exercising their voting rights--be it with voter ID requirements, or the even more pernicious felon disenfranchisement laws in many states.

For instance, Iowa, Kentucky, and Florida permanently ban any convicted felon from exercising their right to vote. Only Maine and Vermont give everyone the right to vote, even still imprisoned felons. The rest of the states allow for reinstatement in some form, once their time has been served. 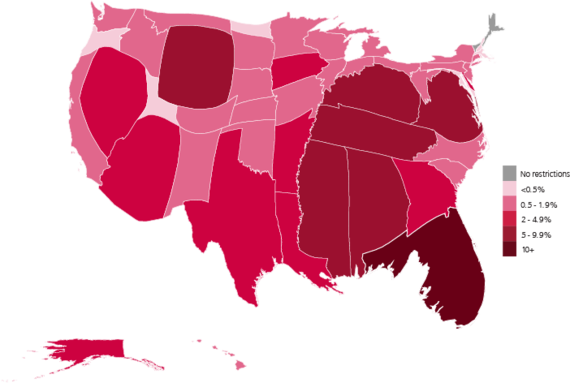 The Sentencing Project in a just released study found:

It is therefore easy to see why majorities in four states are in the Take Back America column. Florida (21 percent), Kentucky (26 percent), Tennessee (21 percent), and Virginia (22 percent) have the largest percentage of disenfranchised voters--more than one in five African-Americans.

But what if another such demagogue with the thirst for absolute power--both Trump and Veep Mike Pence have said Vladimir Putin and even N. Korea's Kim Jong Un are stronger leaders than President Obama--is able to disguise the racism and divisive politics that demagogues must utilize to achieve and keep power?

It's terrifying just how close Trump seemed to come to the White House before his latest blunders. But what would be even more terrifying is the possibility another, much more polished demagogue, might stir up the Take Back America crowd in future election cycles.

African-Americans now comprise 50 percent of our 2.3 million prison population when they are 12 percent of our population. There are many states that restrict many other rights (mainly red states), including abortion rights, immigration, even the collective bargaining rights of workers that are no longer able to negotiate for their own living wages.

Preventing another Donald Trump is why our political leaders must to find a way to re-unite the Divided States of America.