Think of the days before the Rise of Trump and all of its chaos and shouting and 3rd-grade insults. I wonder what people thought when they heard the name Trump University. Images of gold-plated turrets and crests on leather armchairs. Or maybe lecture rooms circled by slick-haired men with piranha teeth, pacing up and down as they sniffed out fresh blood.

The fresh blood part isn't far off. According to newly-released Trump U documents, the unlicensed educational institution (because we certainly can't call it a university) was nothing more than a predatory, money-making scheme. Students paid thousands of dollars to learn how to become successful real estate investors, à la Trump. They left in mountains of debt.

In some ways, it was similar to Trump's "recession proof" Trump Network, a Mary Kay-like multi-marketing ploy where participants could sell vitamins for a hefty fee -- $497 for the starter kit. They were promised hope in a failing economy (if they paid up). They often lost thousands of dollars, and eventually the company folded.

The also-defunct Trump U was a variation on this theme. According to a newly-released deposition, it was helmed by "high-pressure, front-end salesmen, inexperienced in real estate, making high-pressure sales" to people looking for a way out of a financial hole. Hundreds of documents from a class-action suit were unsealed last Tuesday, including statements from former university sales manager Ron Schnackenberg . He quit in May 2007, disgusted by the enterprise.

The documents contain shocking stuff, even if you accept that orange men screaming about pig's blood are the Big (or small) Swinging Dicks in American politics today. 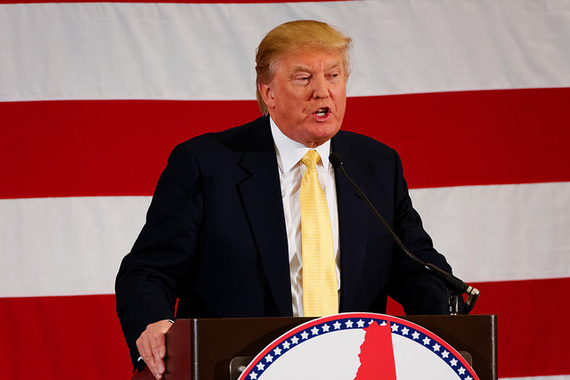 Trump University exploited desperate people. Students who couldn't afford the program had to pay using disability income and loans based on their apartment equity.

Many of us are swimming in debt in 2016. I know I am. I've never owned a credit card -- it is all education-related. My dear friend recently confided that she racked up nearly 100k of debt getting an education. Sometimes I log into my Sallie Mae account and start manically laughing, and then crying, and then wondering how on earth it's okay that many of us will be paying our college debt for the rest of our lives.

There's hope in an education. It's no guarantee, but we hope that just maybe we will land a gig that will cover our monthly payments for the next 35 years, and even allow us a car, or a house if we're super lucky.

Like Trump's snake oil peddling scheme, Trump Network, Trump University dealt in hope. Ordinary folks could learn to invest, make something out of nothing, and sell sell sell. You, too, can be a trillionaire! This is America, baby!

But -- you've gotta spend money to make money. And so, according to Schnackenberg, "Trump University speakers told students to raise their credit card limits so that they could be ready to purchase real estate." Then, speakers pressured those students to use their new sky-high credit to purchase more classes at the institution, like the $35,000 "Elite" program. For such a hefty price, participants could learn about real-estate ... from diamond salesmen! That's right -- Schnackenberg said a jewelry maker with no real estate business experience led some Trump seminars.

Schnackenberg said that "not a single customer who paid for a Trump University seminar programs [sic] went on to successfully invest in real estate based upon the techniques that they were taught." Gosh, that tends to happen when you are using a diamond weight estimator card to figure out a condo's value.

I did NOT make this up. pic.twitter.com/fkVL4ZBRe7

The Trump University playbooks read like a David Mamet play. Always be closing. Pressure 'em. Fuck 'em. Salesmen know that people "buy emotionally and justify it logically." That's a quote from the playbook, but it could also be a quote about this election season.

Trump's campaign should have collapsed on Tuesday when this information came out. But he's the ultimate front end, high-pressure salesman, preying on unsatisfied Americans. He's in the process of closing one hell of a high-pressure sale.