The Trump International Hotel & Tower in Chicago is taking its holiday gingerbread display to another level with the Gingerbread Express, a working elevator made with more than 1,000 bricks of sweet stuff.

The elevator to the hotel's Michelin-rated restaurant Sixteen (on the 16th floor, naturally) is covered in real gingerbread and other confections. Biz Bash said the lift plays footage of a roaring fire on interior TV screens while a mini train even passes through overhead.

Unsurprisingly, the creation also smells "amazing," according to Fox Chicago.

"People think it's a fake smell but it really is coming from the cookies in the elevator," Trump Hotel marketing manager Jennifer Boulos told HuffPost by phone.

“We used 200 pounds of sugar and tripled the amount of spices — ginger, nutmeg, cinnamon, molasses, cloves — we used last year so the aroma would be even stronger inside," Trump pastry cook Ligia Mihut told Chicagoist. "We stopped counting tiles at 830, but I know we have more than 1,000. Many we keep stored in the cooler for maintenance, which we do daily.”

The pastry team at Sixteen used 308 pounds of gingerbread dough, 942 gingerbread bricks, 222 pounds of frosting, 178 pounds of sugar and 103 pounds of chocolate to create the elevator, according to the restaurant's blog.

The gingerbread elevator, which runs from the ground floor express to Sixteen, is open to the public and runs until the new year. 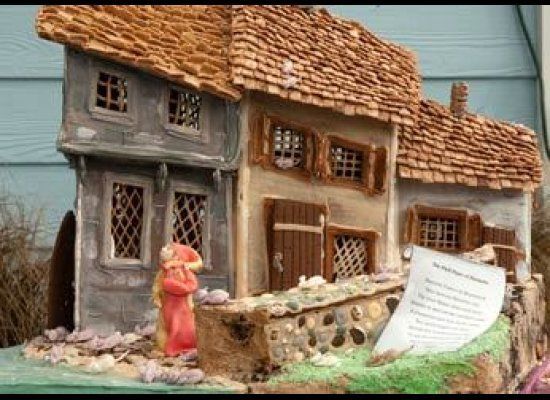