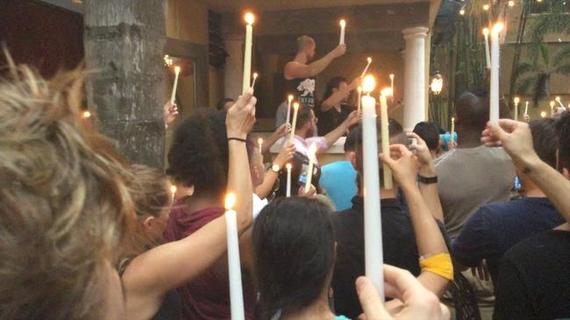 {After another massacre, a vigil: Orlando Sentinel photo)

Donald Trump and Hillary Clinton have had a new 9/11 moment -- an opportunity to explain to a waiting nation where they stand, and where they want to lead us, in the aftermath of a horrific assault on the American sense of security.

Trump stood squarely in the role of Donald Trump.

After the coordinated terrorist attacks on the World Trade Center and the Pentagon on Sept. 11, 2001, Clinton reminded followers today in Ohio, she and other leaders rallied behind a Republican president who within days was reaching out to the Muslim community in search of healing.

After 9/11, Clinton said, "We did not attack each other, we worked together.''

After the slaying of some 50 innocent people at a night club in Orlando over the weekend, the worst mass-shooting ever on American soil, Trump is flatly accusing President Barack Obama of not knowing what he's doing. And Clinton, he claimed yesterday and again today in New Hampshire, is ready to open the gates to more immigrants intent on doing Americans harm.

"I want all of us -- us -- to work together,'' Trump maintained -- but that includes convincing "the Muslim community'' to "turn in the people who are bad.'' Repeatedly, he spoke of a Muslim threat, as Clinton spoke of Jihadists.

There were clear, if thinly veiled, references to Trump's ongoing campaign rhetoric in Clinton's own remarks today -- "this has always been a country of 'we,' not 'me,''' she said. And: "We are not a land of winners and losers.'' And this: "Inflammatory anti-Muslim language" and talk of banning families from the U.S. "plays right into the terrorists' hands:"

Yet she focused today on her intentions of defeating, not containing, ISIS abroad and identifying and stopping "lone-wolf'' terrorists at home.

Trump, on the other hand, wielded unsubstantiated claims about Clinton's intentions of vastly increasing the immigration of Syrians and others who threaten U.S. security. "Can you imagine what they'll do in large groups, which we're allowing to come here?'' Trump asked. "We have to prevent large pockets of radicalization from forming inside of America -- not complicated.'' Most ominously, Trump asked: "Why are they here?"

It was Clinton's State Department, he said, which first allowed refugees of Middle East struggles to stream ashore in America, and it's Clinton, the candidate, he maintains, who stands to make matters much worse. Clinton is welcoming "a Trojan Horse'' of infiltrators, Trump suggested.

As for Obama, Trump said: "Clearly this president does not know what he's doing.'' Yet, somehow, even this sounded less offensive than Trump's oblique suggestion on Fox News this morning: "People cannot, they cannot believe that President Obama is acting the way he acts and can't even mention the words 'radical Islamic terrorism.' There's something going on. It's inconceivable. There's something going on."

"Hillary Clinton -- for months and despite so many attacks -- repeatedly refused to even say the words "radical Islam," until I challenged her yesterday to say the words or leave the race,'' Trump said. in New Hampshire.

Today, in Clinton's words, the threat the nation faces is a question of "radical Jihadists.''

While Trump attempted to portray his immigration plans -- which include a wall against Mexicans and a ban on Muslim immigrants -- as "mainstream immigration'' versus Clinton's plans as "radical immigration,'' Clinton held out a belief that the diversity which Trump fears is actually a pillar of the nation's strength. "Our open, diverse society is an asset in the struggle against terrorism, not a liability," Clinton said.

In contrast, Clinton made a pitch today at rallying Americans for a common struggle in the wake of another terrifying saga, while Trump attempted to make the most of a tragedy in rallying voters against Clinton and Obama.

"An attack on any American is an attack on all Americans,'' Clinton said. She spoke of Americans "refusing to be intimidated or divided.''

As is his custom, Trump misrepresented Clinton's views on another issue central to this debate.

"Hillary Clinton says the solution is to ban guns,'' he said. "Her plan is to disarm law-abiding Americans, abolishing the Second Amendment, and leaving only the bad guys and terrorists with guns. She wants to take away Americans' guns, then admit the very people who want to slaughter us.''

It's assault weapons that Clinton is targeting, as well as "loopholes'' in federal background checks for gun-buyers that enable them to purchase weapons unchecked online and at gun-shows. "Weapons of war have no place on our streets,'' Clinton said today, the day after another assault rifle in another madman's hands has felled dozens of innocent Americans.

Most jarring, however, was Trump's insistence that he offers more for women and the LGBT community than Clinton promises.

Because the site of the Orlando massacre was a night club catering to gays and lesbians, and the assault weapon-toting assailant had identified himself as homophobic, this act of terrorism also stands as a monumental hate crime.

The LGBT community has "millions of allies who will always have your back,'' Clinton said in Ohio, "and I am one of them."

"Ask yourselves, who is really the friend of women and the LGBT community,'' said Trump in New Hampshire, appealing to a concern for security well-known among married women who tend to vote Republican, as he spoke of Islamic radicals who attack women and gays.

Two swing states, two candidates for president, two portraits of post-terrorism demeanor. Veering from his scripted speech, Trump also said of their appeals to women and LGBT voters: "I believe some day that will be proven out.'' Yes it will. Long after Orlando, long after 9/11, it will.