The LGBT movement faced its first big test of the Trump presidency this past week, and fortunately passed. 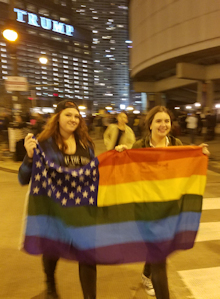 Fortunately, LGBT activists around the country reconnected with each other and pre-emptively made plans for immediate response protests to mobilize our community and allies, taking inspiration from the large women's marches, immigrant and refugee rights airport actions, and other anti-Trump protests.

Fortunately some - though still too few - brought LGBT presences to those "other" issues, showing solidarity before LGBTs per se were attacked. This sent an important message that large sections of our community are not the stereotypical white gay middle-aged male - narrowly concerned only for our rights, and the hell with everyone else -- and could perhaps thus enlist the support of non-LGBTs if/when we're under the gun.

We'll probably never know for sure, but these preparatory actions by our community probably were critical to preventing these anti-LGBT proposals from becoming Trump's latest Executive Order atrocities. Rather than toss a risk-free bone to his bigoted base, Trump had to contend with an enlarged backlash at a time when he's already taking heat from newly re-energized immigrant, Muslim, Arab American and women's rights activists. So we owe a debt to the activists in these "other" movements for preparing the ground for LGBTs.

Confronting the on-again, off-again Trump anti-LGBT measures, some activists complained of the seemingly endless "head fakes" and "trial balloons" coming out of this administration. But these are a staple of every administration, Democratic and Republican. And however frustrating they are to deal with as organizers, these head fakes are in fact a good sign for us.

The frequency of these head fakes suggests a regime that is insecure and cognizant of how deeply unpopular it is. After all, the purpose of a trial balloon is to test the waters to see if a new policy is politically viable. That this government has had to expend political capital floating several of them, just to be shot down, is a sign of weakness. The repeated retractions raise doubts in their political base while giving confidence to their opponents.

Our own LGBT history shows the disastrous consequence of not adequately responding to these trial balloons, by energetically organizing for the worst while hoping for the best.

In 1993 the Clinton administration swept into office in part on the promise of equal employment rights for Lesbians, Gays and Bisexuals in the military. As a bigoted, bipartisan congressional attack mounted against the incoming administration, LGBT non-profits and "friend of Bill" Clinton gay activist David Mixner counseled calm, and asked us to withhold criticism of Clinton.

Then a month before the huge 1993 March on Washington, Clinton floated the idea of segregating gays in the military as a condition of letting us in. This utterly repulsive proposal got only muted push-back, if any, from the LGBT non-profits, including at the then-largest ever LGBT march - a tremendous missed opportunity.

The result was an historic defeat for our community -- the infamous "Don't Ask, Don't Tell" was introduced by gay Congressman Barney Frank and passed a few months later.

Fast-forwarding to today, while we won round #1 vs. the current administration, their weak disavowals of these anti-LGBT measures should give us no cause for complacency: "We do not have plans to sign anything at this time [concerning anti-LGBT "religious freedom" executive orders] but will let you know when we have any updates," said a White House spokesperson. (emphasis mine)

Not, "We would never dream of signing such a reactionary piece of garbage," just no plans at this time.

So some LGBTs have caught a break for now. But Arabs, Muslims, refugees, Native Americans, immigrants especially from the global South, and others - many of them also LGBT - remain in the direct line of fire.

It is not good enough for those of us who are not part of these communities to simply verbally denounce the bigotry of the Trump administration's actions. We must show up and respectfully participate in the defense activities organized by groups more marginalized and under the gun than we currently are.

This includes groups, such as Muslims and Arabs, whom many white gays hold revolting stereotypes about as being universally sexist and homophobic....so as to excuse their own Islamophobia. As with many people in the past who held homophobic attitudes, these Islamophobic attitudes are typically held most fervently by those who have never known a person of the Muslim faith.

As an activist who has had steady contact with Arab and Muslim activists in the decade and a half since 9/11, I can tell you that yes, homophobic attitudes do indeed exist in the Arab American and Muslim American communities - as they do in all communities, since no community is monolithic in its social and political opinions.

More hopefully, I can tell you that in each and every instance where I as an openly gay activist encountered homophobia from one or more persons in these communities, other members of those communities forcefully stood up in my defense against the homophobes, and prevailed in each instance with my doing little more.

In the fight against bigotry of all kinds, someone has to take the first step. Using one's latent Islamophobia as an excuse to not stand up and take action against Trump's bigotry against Arabs and Muslim is unforgiveable when today they are the foremost targets of his scapegoating.

To paraphrase Pastor Martin Neimoller from Nazi Germany, "First they came for the Arabs and Muslims, and I didn't speak up..." White LGBTs have caught a break...for now...but that could change if others are defeated under Trump's onslaught.

In recent years LGBTs have received a great deal of help from non-LGBTs in order to win the rights we have today. I'd say it's time we extend that same courtesy to others whose rights are most under attack.