It was not much more than a week ago that Republican insiders were having animated public discussions about how Donald Trump could be deprived the GOP nomination. The consensus was straightforward. Unlike the consensus a few weeks earlier--that Kasich and Cruz needed to drop out of the race to clear the field for a Trump-Rubio death match--the new consensus was that that they should all stay in the race. This time, the goal was not finding someone who could beat Trump to the 1,237 delegates needed for a first ballot victory in Cleveland in July, but instead simply to deny Trump a first ballot victory.

If Trump could be denied an outright majority of the delegates, the new strategy suggested, he could be defeated on the first ballot. Then cooler and wiser minds could prevail, and the GOP establishment could select someone else to lead the ticket in the fall. Lost in all of the scheming by Republican insiders, however, was any thought that one or more of those candidates might have their own plans in mind, or have priorities that might go beyond whether or not Donald Trump won the nomination. While Marco Rubio would have been delighted to have others pushed out of the race on his behalf, John Kasich made clear that he intended to live or die on the results in the Ohio primary. Ted Cruz, meanwhile, had no intention of being guided by whatever the GOP establishment might cook up.

It turned out that this new consensus strategy didn't last much longer than the previous consensus strategy. Last week, Mitt Romney declared Donald Trump to be a fraud, a phony and a danger to America's future, and beseeched the GOP primary voters to reject Trump and vote for someone--anyone--else. The irony was lost on no one--except apparently Mitt Romney--that four years after he sat in a private luncheon of wealthy donors and made his infamous 47% speech, a speech where he assaulted the character of nearly half of the American electorate, Romney thought he had the moral authority to guide the electoral choices of those very same Americans, who now constitute the core of Donald Trump's support.

Then, just days after Romney's speech, a coterie of billionaires and GOP luminaries met in secret to plot their own anti-Trump strategy. The secret cabal--whose proceedings were live tweeted by conservative commentator Bill Kristol--included Speaker of the House Paul Ryan and Senate Majority Leader Mitch McConnell, along with political operatives from many of the campaigns that Trump has vanquished, all with the aim of launching an ad blitz to point out to voters Trump's less-than-sterling credentials to be the GOP nominee.

Romney's speech was indeed a searing indictment of Donald Trump, but he said nothing that Trump voters have not heard before, and at the end of the day his speech and the gathering of billionaire donors had exactly the impact on the race that one might have expected. It validated the central premise of Donald Trump's campaign: the donor class of the GOP have been having their way for decades now, and election after election have used the votes of the GOP base to win power and pursue policies that were good for the donor class but have left the average GOP voter in the dust.

On the Tuesday following Romney's speech and the weekend meeting of the Illuminati, the voters gave a defining middle finger to Mitt and the GOP establishment. Tuesday was perhaps Trump's his biggest day of the campaign. Unlike Super Tuesday, when his sweep was blemished by a loss to Cruz in Texas, this Tuesday was a defining, contemporaneous romp in the deep south and mid-west that in normal times--and were he a normal candidate--would have left the hearts of Republican big-wigs atwitter. 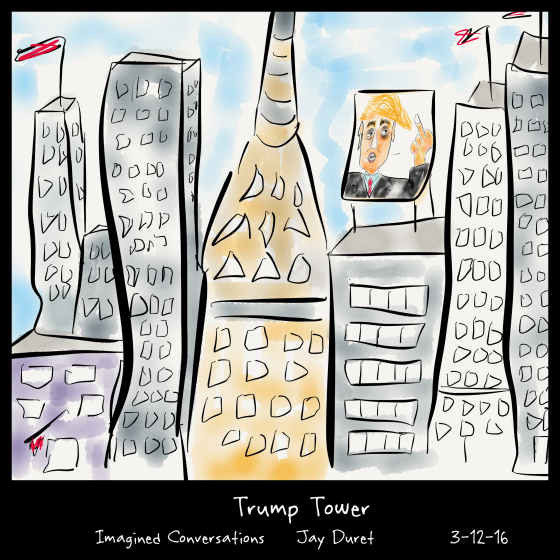 While Trump was the big winner on Tuesday, it was a big night for Ted Cruz, as well. Cruz--no doubt the most cunning of the GOP candidates--is playing a more complex game than the rest, and therefore the importance of the results on Tuesday for his plans may have been lost on many. Cruz's objectives are twofold: either topple Trump in a convention strategy, or come out of the 2016 race best positioned to lead the conservative wing of the party for a run against President Clinton in 2020--with visions of a weakened president, à la President Bush 1992. Simply put, one way or the other, Ted Cruz plans to be the next Republican president of the United States.

Cruz has skillfully risen to the top of the anti-Trump contenders, and GOP anti-Trump schemers should have no doubt that he will oppose any convention deal that puts anyone but himself at the top of a down ballot vote. The leaders of the cabal will have to choose between him and Trump--truly a choice of the devil you know vs. the one you can only imagine--but there will be no nomination for Marco Rubio, for John Kasich or for Paul Ryan, as no doubt some still imagine. Should one of those names be put in nomination, Cruz will retreat to the moral high ground and lead the cries demanding that the election not be stolen by the establishment from the candidate that won the most votes.

The vote this past Tuesday was a triumph for Cruz because it marked the death knell of Marco Rubio. Rubio hurt himself with his puerile antics attacking Trump in the run up to Super Tuesday. Since then, his vote totals have waned and this past Tuesday he did not win a single delegate. Should he lose his home state of Florida this coming Tuesday, as polls widely suggest, he will not only be out of the race, but his brand as the future of the Republican Party will be in tatters, leaving Cruz standing alone as the 44 year old Cuban born senator of the future.

Despite sharing the anti-establishment lane in this year's GOP competition, Trump and Cruz are starkly different. While Cruz has touted his hard earned anti-Washington bona fides, his campaign is straight from the Republican Party playbook. His stump speech and voter targeting has adhered with absolute fidelity to Grover Norquist rules. He pounds on the Second Amendment, religious liberty, reigning in entitlements and reducing the debt. He attacks federal intervention in education, gay marriage, and eminent domain. At the same time, he has offered a tax plan that is music to the ears of his largest donors in the hedge fund and oil and gas worlds. His proposal to replace the current progressive income tax system with a 10% flat income tax and a 16% value added tax would constitute a massive shift in the distribution of the income tax burden from the wealthiest Americans to the rest of the population.

In contrast, Donald Trump has turned his back on almost every issue that Cruz--and Norquist--deems sacrosanct.

Faced with the impending nomination of Donald Trump, many across the GOP have been migrating through the five stages of emotional response to a tragic event suggested by Swiss psychiatrist Elizabeth Kübler-Ross: denial, anger, bargaining, depression and acceptance. By and large, the long denial phase ended with Trump's victories on Super Tuesday. The anger, the bargaining and the depression are evident in different forms. The anger has been widespread, the bargaining in the myriad strategies to forestall what increasingly looms as inevitable. And then there is the depression, manifest in bemoaning the inevitable breakup of the GOP.

Donald Trump will likely be the nominee of the Republican Party. And despite the indictments of his character and his capacity to serve, come November he will have the support of 95% of the Republican establishment. Bill Kristol pronounced that he would rather see Hillary Clinton in the White House than Donald Trump, and many Republicans have voiced support for a third party conservative to preserve the integrity of the conservative movement, but that anger will subside and many, if not most, will find their way and their rationales for supporting the xenophobic narcissistic New York billionaire.

It might be a difficult path, but they will have help. First, there is Ted Cruz. If the choice is Ted Cruz vs. Donald Trump in Cleveland in July, the leadership of the party would ultimately prefer to have Donald Trump as their nominee. It will not matter that Cruz is a strict adherent to core Republican principles, while Trump is not. It is not business, it is strictly personal. They may each be narcissistic megalomaniacs, each in their own way, but Trump, at least, is a man you can deal with. His brand is to negotiate, while the Cruz brand is to never negotiate. It will be an easy choice, particularly for Mitch McConnell, the Senate Majority Leader who Cruz has taken special pleasure in defying and humiliating over the years.

And then there is Donald Trump's silver bullet. Hillary Clinton. Senator Mike Rounds (R-S.D.) followed the path first blazed by New Jersey Governor Chris Christie, when he declared that Donald Trump would be a better choice for president than Hillary Clinton even if he had failed to disavow the endorsement of former Klan leader David Duke. Hillary Clinton is powerful motivation for Republicans to make it to the polls, even for a man that has been so widely excoriated as unacceptable by so many, for so long.

Barring some surprises on Tuesday night, the nomination of Donald Trump to be the Republican nominee for president will enter a new phase. This will be the acceptance phase. It will not be easy, there will be a lot of words that will have to be walked back and hatchets that will have to be buried--he might be a fraud, a phony and a danger to America's future but he will be their guy. Soon, faced with the reality that a third party run--be it by disgruntled conservatives or neocons--would only assure defeat in the fall, the elders of the party will start to make quiet arguments about why Trump is not so bad, not compared to Hillary at least. Even Senator Ben Sasse (R-Neb.) will likely fall into line, or at least will quietly recede into the background. And Trump will try hard to mute some of this rhetoric, and to behave a bit more... presidential.

Meanwhile, as Marco Rubio quietly slinks back to his home in West Miami, Ted Cruz will gear up for the next phase. He knows that Hillary will crush The Donald in the fall, leaving him as the ultimate winner of the 2016 GOP campaign, the unchallenged leader of the conservative movement, prepared for his next run--the one that he always thought was the one that would put him in the White House--against President Hillary Clinton in 2020. 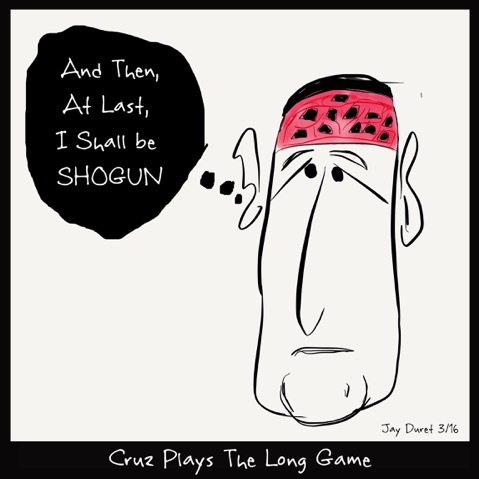 Artwork by Jay Duret. Find him at jayduret.com.