Fox News and CNN have given plenty of coverage to Donald Trump's attempt to swing Bernie Sanders voters to his campaign, despite Sanders' support for Clinton. At the same time, Trump is insulting Ted Cruz and ignoring the Texas senator's backers, at his own electoral peril.

Most folks were familiar with Cruz's Republican National Committee (RNC) speech in Cleveland, when he refused to endorse Trump. Noted author Richard North Patterson wrote that Cruz's speech was "capped by imploring conservatives to vote their conscience in November. He might as well have said that any conservative with a conscience should never vote for Trump....Delegates booed the apostate vociferously. So visceral was the atmosphere that Heidi Cruz had to be escorted from the floor."

Patterson added "An observer might have seen his moment of payback as simple justice. It was Trump, after all, who mocked his wife's appearance in a tweet, and who linked Cruz's father to the JFK assassination -- low points even in a year where The Donald dragged our politics into the primordial ooze." Now the boos for Bernie Sanders seemed mild by comparison.

Rather than simply speculate, Huffpollster did look at how many Sanders supporters might defect. Natalie Jackson and Janie Velencia reported that 90 percent of Bernie backers will vote for Clinton, and eight percent will go for Trump, not the big haul the Republican had hoped for. And that poll was taken before Sanders endorsed Clinton. In other words, it might be smaller than eight percent.

But Trump backers were not that dismayed. "If Bernie Sanders supporters were to be disenchanted with their nominee and throw support behind Donald Trump, you bet that's totally in play, and we know that the margins will be very small come fall," said Utah state GOP representative Keith Grover. So every vote matters, right?

But how about those Cruz supporters? The boos that Ted Cruz got at the RNC in Cleveland got a lot of attention, but how do Republicans feel about him now?

Public Policy Polling (PPP) has looked at that very question. They found that Cruz did have fairly low approval ratings. Among Republicans, he only had a 23 percent approval rating, and a 61 percent disapproval rating. "We asked GOP voters who they would support in a hypothetical primary contest between Trump and Cruz, and Trump wins out 61-19," wrote PPP. I participated in an nj.com poll, where Cruz got 43 percent support. He doesn't have a majority, but he has a significant minority. 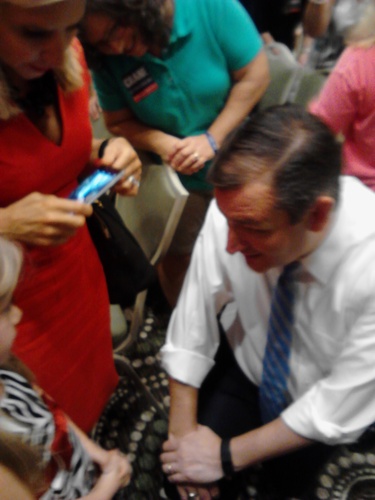 I attended a Ted Cruz event for a local Congressional candidate (State Senator Mike Crane) in Newnan, Georgia, on the outskirts of Atlanta, two days after his speech in Cleveland. To my surprise, he was very warmly received, without a single protester at the open event in the audience (though the police protested the congressional candidate at the event over comments about guns and resisting "no-knock" warrants), and the crowd did everything they could to shake his hand, and pose for pictures. Attendees shared with me their disgust with both nominees, and their desire to vote for Libertarian Gary Johnson, start a new political party (called "The Freedom Party") or stay home on Election Day.

Grover is right...the election could come down to the margins. And Trump can't afford to snub Cruz and his supporters this campaign season, while trying to appeal to some populist socialism.