As a Nigerian women's rights lawyer and activist who partners with survivors of rape and sex trafficking in West Africa, I've become accustomed to dealing with both the best and worst of humanity. I view my work at Pathfinders as a sacred gift which affords me the privilege to celebrate our shared humanity, yet simultaneously condemn that which is inhumane in each and every one of us. Fear, coupled with access to unfettered power, potentially corrupts us all. 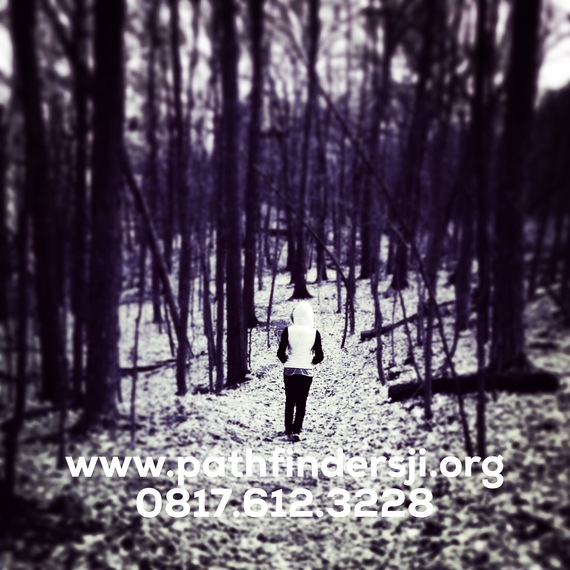 I was not remotely surprised by President Donald J. Trump's unconventional rise to the most powerful position in the world. After all, America itself had created the vacuum for it by failing to ensure that every voice, opposition included, was seated at former President Obama's table of ideals. What did surprise and then impress me was the brilliance of Trump's packaging of his personal fears to appeal to the American masses who felt marginalized by prior administrations. Many in my circles, however, were shocked by the President's success in the November elections. Repeatedly, I was asked, "Is this the same guy who ultimately rose to fame in African households via the reality show 'The Apprentice'?" The same guy whose former wife's sworn deposition testimony included a claim of rape and violence? The one with zero political experience? The orange guy with the toupee who many thought would be brutally annihilated by Hillary Clinton? The "pussy" grabber? That guy?

From our perspective, Trump's campaign was ladened with way too many unforced errors to have been conventionally successful. Most of us on the African continent are accustomed to electing benevolent dictators who buy and then bully their way into our so-called democratic electoral system, but very rarely have we come across an American candidate whose personal fears and cosmic ego dictated and then translated into a successful campaign.

Granted, there were supporters on our continent who unapologetically hailed Trump's eccentric rise to President of the United States. Why? Primarily because their religious sentiment aligned with his concocted 2016 "Come to Jesus" moment; with his newly discovered pro-life stance on abortion and with his not so covert threats against the LGBTQ community. Others believe that he is a strong leader, one that is respectable and desperately needed for such a time as this. His unpredictability was a breath of fresh air, precisely what was needed to "shake things up" in a world increasingly obsessed with reality television. Indeed, this was the time. And Donald J. Trump was the one.

But for those of us on the African continent who saw through the rhetoric and began to consider the far reaching implications of a Trump presidency on humanity, we began to sleep with one eye open after the Republican Primaries. We realized that there was an urgent need to begin the mobilizing conversations necessary to combat what we knew was inevitable: Trump's America would be one that ultimately reflected his personal fears at the expense of the rest of the world. Activists like myself did not have the luxury to lament Trump's election. That was a privilege afforded only to those who would likely be paralyzed by inaction.

So here are my overall sentiments and how this Nigerian activist is bracing for Trump's America:

1. Africans believe Mr. Trump when he says it will be "America First."

In the poignant words of Dr. Maya Angelou, when someone shows you who they are, believe them. We believe you, President Trump. It will be America First, at least for the two percenters who comfortably rotate in Trump's circles. The rest of America, particularly those that voted for him, will soon be betrayed. As such, America and the rest of the world, particularly the developing world, needs to quickly accept this as fact and make whatever adjustments are necessary for at least the next four, possibly eight, years. If Trump's first few weeks in office are any indication of what is to come, his foreign policy will be alienating, brutal and unwavering- a monumental departure from the last eight years. From the implementation of what Trump once touted as a Muslim ban to the sanctions he has imposed on Iran and proposed on "you will pay for the wall" Mexico, President Trump has made it clear that fascism and oligarchy, disguised as nationalism, will dictate the tone of his authoritarian regime.

Those of us on the African continent anticipate the attrition of the notion of shared humanity. Practically speaking, this will translate in the loss of military funding in Nigeria's fight against Boko Haram which, over 1,000 days later, continues to suffocate the souls of 195 girls from Chibok, Nigeria who were brutally abducted from their school in April 2014. Also anticipated is a swift retreat from humanitarian assistance, HIV/AIDS funding and development on the African continent because after all, countries like Nigeria, the self-proclaimed 'Giant of Africa', are "corrupt" and impotent to #BringBackOurGirls. In a country where two-thirds of its people reportedly live on a dollar a day and are now also reeling from a recession, Trump will ignore the lingering implications of colonialism and western imperialism and demand that we pull ourselves up by the strapless boots we were handed as our colonizers unapologetically vacated. The toll on human life on the continent will be sizeable and those fleeing for their lives will likely have America's golden gate of liberty slammed in our faces. But who cares? It's #AmericaFirst.

2. Trump's election has made my job as a women's activist considerably harder.

According to the Global Slavery Index (2016), Nigeria has the world's 23rd highest number of slaves - 875,500 - and its National Agency for the Prohibition of Trafficking in Persons (NAPTIP) reports that Nigerian girls make up 60-80 percent of the girls trafficked into the European sex industry. Other estimates are as high as 90% (UNDOC, 2016), with Italy being the number one destination country. This writer's home town, Benin City (Edo State) is an internationally recognized sex trafficking hub, with built in infrastructures and networks which support the sale of human bodies. The souls and bodies of women are turned into commodities for financial gain while the survivors themselves are held in debt bondage, severely abused, starved, tortured or infected with various sexually transmitted diseases before being deported back to Nigeria. Others who are victims of organ trafficking are murdered and never make it back home. The survivors whose lives tenuously hinge on the margins of poverty and abuse, yet who summon up the courage to resist the brutal annihilation of their souls, are the women and girls I am honored to serve. 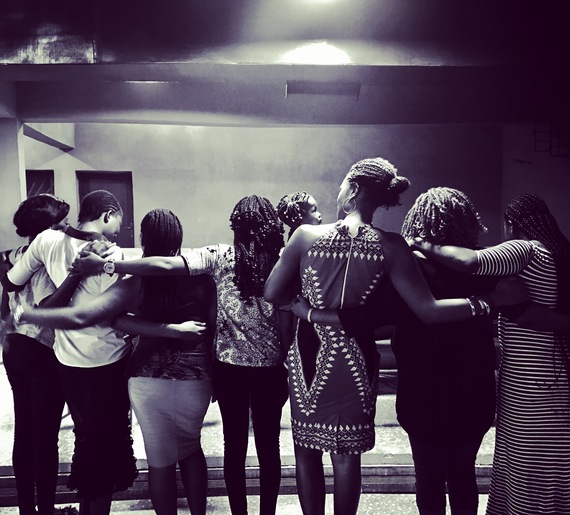 No, President Trump did not singlehandedly create patriarchy or the subjugation of women which has resulted in the reality that a human being can now, globally, be purchased at an average cost of $90. And no, Trump is not to blame for the proliferation of the evil that is sex trafficking, but he does occupy the highest office in the world and his sense of entitlement to women's bodies will powerfully reverberate as a convenient example to follow.

This same sense of entitlement is what fuels rape as a weapon of war around the world. It is what fuels the ideology of Boko Haram, the world's deadliest terror group which forces grown men to swallow bullets for breakfast, rape abducted girls into motherhood and strap IEDs to the bodies of teenage girls with babies on their back. It is this same sense of entitlement that underpinned Mr. Trump's comments when he casually described grabbing the body parts of women with impunity, as if he were offhandedly referring to one of his licensed towers. Entitlement is what has compelled millions of rapists around the world to blatantly steal the souls of one out of every three women who have been forced to have either sexual and physical assault written into their life stories. We say we abhor this behavior, yet sheepishly sit by and hand women the pens by our complicity.

And so, yes, Mr. Trump, you have made our work harder; harder because more men will be emboldened to harass and assault women. After all, the President of the United States does and does so with impunity. Once again, the casualties will be high. But who cares, we're making America great again.

3. Notwithstanding the foregoing, Trump's election is an unparalleled global catalyst and stimulus for change. He is a much needed social disruptor.

Perhaps Trump's presidency has presented the United States and the rest of the world with a precious gift. His "America First" dogma has forced America to first examine her own hypocrisy and to unearth the superficially buried roots of her sexism, racism, homophobia, islamophobia, etc. For the first time in a long time, Americans are grabbing the proverbial bull by the horns and rallying around their similarities and endeavoring to shun their differences. They are awakening to the power of collaboration and its unfettered ability to generate the change they want to see.

Beyond America, Trump's election has served to awaken the sleeping consciousness of millions around the world who have pledged to resist, agitate and demand the world they want to live in. The day after Trump's election, millions gathered globally to send the message that women will not succumb to fear and that the definition of justice will extend beyond the convenience of compassion to boldly charging the darkness via activism. People are putting their money where their march is and what those of us in the struggle for human rights could not have singlehandedly accomplished is now possible because there is a committed army rising to fight for the soul of humanity.

In Nigeria, we are bracing for Trump's four, and possibly eight, years as a world leader. We understand that it will be riddled with much of the same frustration and uncertainty I experienced in writing this article. Nonetheless, we are equipping the leaders in our survivor led organization to resist, to be prepared to speak truth to power when Trump's policies targeting women attempt to unravel the fragile tapestry we are endeavoring to mend. We are preparing to step boldly into the gap and to hold space for the broken with the understanding that struggle precedes progress and that power concedes nothing without demand.

President's Trump election presents us with an unconventional opportunity. His role as a social disruptor will require a global revolution which may or may not be televised.