Undermining and scapegoating the immigrants for political gains has a rich history but with Donald Trump, it reached the new lows. Generally, the public always expects the colorful statements from this famous business mogul and TV personality. This time, however, his publicity overkill is evident: when announcing his candidacy in the 2016 GOP presidential primary race, Trump exposed his prejudice against Mexican immigrants calling them "rapists" and such--and the public distaste of it went viral.

In solidarity, many immigrants and native-born alike walked away from dealing with him: a Colombian singer J. Balvin cancelled his performance at Miss USA pageant while Roselyn Sanchez and Cristian de la Fuente pulled out from co-hosting it. The worst-for-business blow came from Univision and NBC that cut all previous engagements, including the Miss USA and Miss Universe pageants plus his Apprentice show participation. However, he insisted he was simply exposing the truth, and appeared to be very proud of his straightforwardness. Let's explore the clash of prides here - Mr. Trump's pride vs. immigrants' pride - seeking to put pride to better use, avoiding cultural insensitivity.

Studies show that most immigrants are proud individuals, as non-verbal expression of pride generalizes across cultures. The moment an immigrant-to-be has crossed the border, s/he loses a prior social status--but not the values, identity, or pride. The virtuous pride is an immigrant's guardian angel, as it:

1. Supports self-confidence during daily struggles;
2. Alleviates prejudice, like anesthesia;
3. Gives the strength not to surrender to a discounted perception of self.

In fact, pride and prejudice reinforce each other, coexisting in the lives of immigrants like two virtual realities: the more prejudice one faces, the more pride s/he needs to shoulder/counteract it.

Research into the psychology of anti-immigrant prejudice has revealed the feeling of threat at its root, with multiple kinds of threats fueling anti-immigrant sentiment throughout the world. While all cultures seem to show intercultural prejudice against immigrants - a comparison between cultures didn't reveal any culture "more prejudiced" than the other, and most nations have their own folks ready to trump or undermine the immigrants, for business or pleasure.

So, all immigrants encounter some stigma but once they adopt the social norms--stigma and prejudice decline. Can we help them make this transition and become the "good guys" that even Trump assumes exist? Can their pride help them succeed? Let's look at the most successful immigrant outliers for the answers.

Pride plays a pivotal role in driving achievement in the face of adversity. The achievers who became Americans by choice and made it big despite the extreme odds stacked against them are the immigrant women of the first generation. Interviewing many of them for my book, I couldn't help but recognize that their stunning successes set a special standard for all achievers-to-be. Why? On their rise to success, they had to overcome additional difficulties: a glass ceiling that America cannot be proud of; lingering stigma against minorities and immigrants; motherhood-household responsibilities; and of course, linguistic and cultural integration.

Here's what we can learn from a woman whose pride of her culture motivated her to stand up, counteract prejudices, and make it in America her way.

Deborah is an editor-in-chief of the American Diversity Report, award-winning author, and intercultural-interfaith coach. Pictured during her C-SPAN interview, she's a person of perfect poise and pride in her roots. 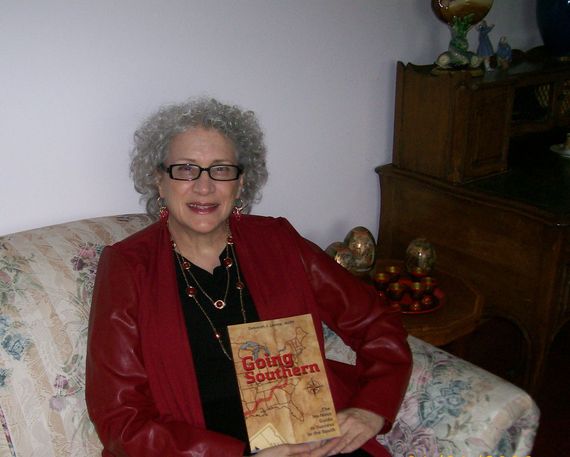 Her task of integrating into the mainstream U.S. culture, in order to fully succeed as her abilities and education at Harvard, NYU, and the University of Illinois at Chicago would allow, was initially hampered by her traditional-Jewish upbringing, so deeply rooted that it wouldn't give way. But over time, it appeared that many of her major accomplishments stemmed from her pride in being Jewish. How so? The victim of prejudice and discrimination as a Jewish woman, she went to work for Jewish agencies, eventually becoming a writer, a diversity expert, and a Huffington Post blogger. Her diverse experiences and cultural anthropology training led to "marrying mentalities," not only the religious beliefs, but also the cultures and mindsets of diverse ethnic-racial communities--something that a person of her brains and background was uniquely qualified to attempt and bring to fruition.

"While I've created many diversity-related projects, the willingness and ability to stand up as a Jew and be heard has been part of the dynamic that gave me mentors and contacts," she said. "My popularity increased exponentially with the creation of organizations and magazines that brought people together, and gave others, not just me, a voice." Deborah referred to her founding the DuPage Interfaith Resource Network 25 years ago as well as The American Diversity Report and also her books.

Deborah's research in cross-cultural game theory, her guides for acculturating New Southerners who come to live and work in the unique-in-spirit Southern United States, and training of people who need to implement a practical interface of Christianity and Judaism all brought her local, national, and international recognition. She practices "Harmonize, not Homogenize" to build the unity and cooperation of diverse proud people and to counteract prejudices for herself and for countless others. Follow her if you can!

It Takes Two to Tango

Many Republicans adopt an anti-immigrant stance; understanding that "it takes two to tango" (it takes both the native-born and immigrants to keep the U.S. competitive) is hard for them even if the consequences are undesirable.

Our national motto, E Pluribus Unum--"out of many, one"-- continues to be an ideal we all can aspire to, with or without Donald Trump. Fanning the flames of racism, xenophobia, and division at a time when the U.S. needs more national cooperation is inexcusable. Therefore, let's make our strong nation more united, helping the new Americans by choice to integrate into America's civic fabric - withholding prejudice and respecting their pride - so they could creatively contribute their best to the perpetual power of our country.