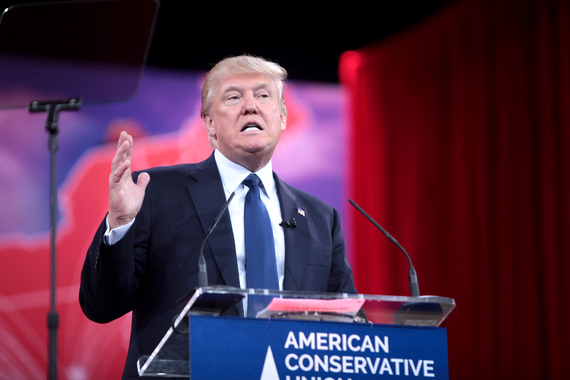 Donald Trump speaking at the 2015 Conservative Political Action Conference (CPAC) in National Harbor, Maryland On April 27, Donald Trump, the presumptive Republican nominee for president, gave a speech at the Center for the National Interest in which, it was advertised, he would give the first systematic presentation of his foreign policy. Speaking from a prepared text and using a teleprompter instead of his usual off the cuff remarks, he went on to describe the present US foreign policy as having "no vision, no purpose, no direction, no strategy."

Trump then went on to outline what he saw as the five main weaknesses of the present US foreign policy: 1. The US is overextended, the result both of reducing our military strength and of implementing economic policies that crippled America's economic potential. 2. Our allies are not paying their fair share. 3. Our friends are beginning to think they can't depend on us. 4. Our rivals no longer respect us. 5. America no longer has a clear understanding of our foreign policy goals.

Trump's proposed response to these five weaknesses was to put "America First," maintain maximum flexibility in how the US would define and carry out its foreign policy rather than be bound by fixed commitments, only use military force when no other alternative was available and rely on "sharp bargaining/deal making" to advance American interests.

The speech was widely derided by foreign policy analysts. Many of which described the presentation as contradictory, inconsistent, and at times bordering on incoherent. Perhaps the most striking element of Trump's speech was his declaration that he did not intend to announce a "Trump Doctrine." Instead he would focus on maintaining the maximum amount of flexibility in the conduct of US foreign policy and forego locking the US into predictable or automatic responses. In short, the "Trump Doctrine" is that a President Trump would not have a doctrine.

Presidents, or would be presidents, often use the occasion of major policy speeches to lay out their view of the world, the challenges that face the United States, and the strategic framework in which their administration's policies and responses would be formulated. These are the sinews of an administration's "doctrine." In some cases, "doctrines" come and go with the change of administrations, while others, like the Monroe Doctrine, become cardinal principals of US foreign policy and were pursued long after the presidency of its name sake had ended.

There are a number of observations worth making about Donald Trump's foreign policy views. First, a doctrine of "no doctrine," in other words a strategy of maximizing ones options, preserving maximum flexibility in order to respond opportunistically as the case may be, makes absolute sense as an entrepreneurial business strategy. This is precisely the strategic nimbleness that distinguishes successful companies from their competitors.

Great powers, however, must stand for something. It is precisely the values they espouse, and the commitments they make, that define who they are and shape the elements of both their hard power and their soft power. It is one thing to be opportunistic in your tactics; it is an altogether different thing to be equally opportunistic in defining the long-term strategy for the kind of international system you hope to maintain. Stability requires a degree of predictability. An international system where the one remaining superpower is unpredictable is an inherently unstable system.

Secondly, Trump's reference to "America First" was derided as a throwback to the American isolationists of the 1930s. They too used the same "America First" slogan, proof for some critics that Trump, or at least his followers, were ignorant of American history. That may be true, or it may simply be a case of Trump showing off his genius for creating controversial labels designed to keep him in the news.

"America First" is at the intellectual core of Trumpism. The essence of Trumpism is that America's current problems stem from the fact that Washington has consistently failed to put "America First" and instead has allowed itself, either because of corruption, stupidity or naiveté, to be taken advantage of by friend and foe alike. By putting America First, Trump argues, he will use his business knowledge, and that of his friends', "to negotiate better deals" so that the US "will start winning again."

A strategy of "America First" goes hand in hand with a rejection of globalism. The Trumpian critique of globalism is that by promoting the needs of the international system Washington has willingly or inadvertently sacrificed America's needs to those of the global system. It is the US military and US cash that are globalism's first line of defense. In the Trumpian critique not only has the rest of the world, including America's erstwhile allies, not paid their share of the costs of maintaining the international system, but they have bent the rules in order to create an economic playing field to their advantage at America's expense.

In this sense there is nothing particularly new or "Trumpian" in "Trumpism." US foreign policy has long been characterized by recurring periods of isolationist sentiment. The most virulent was in the 1930s, when the "America First" movement routinely condemned America's World War I allies and major banks and "big business" interests for having taken advantage of gullible Americans and persuaded the United States to enter the war in order to advance their own financial objectives.

Similar sentiments occurred in the aftermath of the Vietnam War. Only this time it was out of touch cold warriors and their allies in the military industrial complex that were to blame for advocating a ruinous war that served little purpose beyond advancing their own financial interests. It took the stunning victory of the US and its allies in the First Gulf War and the collapse of the Soviet Union a few months later to largely put an end to those American isolationist sentiments.

In his inaugural address, President John F. Kennedy resolutely declared that the United States "shall pay any price, bear any burden, meet any hardship, support any friend, oppose any foe to assure the survival and the success of liberty." More than a half a century later, it is clear that Americans are no longer willing to "pay any price" or "bear any burden" in pursuit of such goals.

Nor is this sentiment a recent manifestation. It has been building for the better part of two decades. President George W. Bush came into office with a commitment to disengage from the Middle East and to reject the burden of nation building. The legacy of 9/11 and the neo-con worldview that in a uni-polar world American military power was sufficient to shape the world to suit America's tastes put a quick end to that objective.

In the view of many American's, military globalism is part and parcel of an economic globalism that has seen governments around the world band together to create larger "free market" economic zones like the European Union (EU) and the North American Free Trade Agreement (NAFTA), while simultaneously encouraging the free flow of labor/migration and capital around the globe. Seamless global supply chains, the impact of digitization, and cheap, instantaneous communications and data sharing has further encouraged this trend by making geography less of a limiting factor of commerce than it used to be.

The problem with globalism as an economic strategy for maximizing output and economic growth is that the costs and benefits of globalism fall disproportionately on different socioeconomic groups. Those economic sectors that decline, in North America and Europe these are principally lower skilled industrial manufacturing jobs, create unemployment, social and personal turmoil, and declining property and asset values, not to mention that they devastate those communities that are overly dependent on the industries affected.

Long-term these jobs would have disappeared anyway, but the economic, trade and foreign policies that encourage globalism invariably makes this happen faster. In turn this breeds resentment against the most visible manifestations of globalism, international capital, trade agreements and migration, both legal and illegal.

It is not coincidental that the demographic profile of many Trump supporters is a carbon copy of that of many Britons supporting a UK withdrawal from the EU. It is the same demographic profile of many supporters of right wing parties in Europe. All three feature an explicit anti-immigration message in their political appeals and all three describe immigrants as taking advantage of their respective countries' social welfare programs and of stealing jobs from current citizens.

All of these anti-globalism movements, furthermore, share a common message in that they blame their political elites for having sacrificed national sovereignty and the interests of the working middle class on the altar of globalism and free trade.

The problem is that neither the countries of the EU nor the United States nor any other industrial countries have come up with an effective way of reintegrating large numbers of displaced workers back into the national economy at comparable wages. Instead, to a large degree governments have relied on ever lengthening unemployment insurance schemes to create a safety net for unemployed industrial workers.

A safety net is only sustainable if it is a temporary measure while unemployed workers transition to other employment. Otherwise it just becomes another income redistribution scheme, one that doesn't solve the long-term problem of dis-occupation, and which only breeds resentment and despair and a new class of citizens perpetually dependent on government handouts.

Moreover, there is some validity to at least some of the Trumpian criticism of US foreign policy. The fact is that the United States is over extended both militarily and economically. The world today is very different from the world that existed when the current array of international organizations and multinational military alliances were created. The United States cannot, over the long-term, continue to be the primary underwriter both militarily and economically of international stability and world order.

Ultimately, this new reality will demand neither an "America First" strategy nor a new "isolationism" but a renewed commitment to creating international coalitions that share a common agenda in promoting world order and stability. American leadership is essential for such an endeavor, but American leadership does not mean unilateral American action and such leadership must be tempered by the realization that, in a hyper-connected, socially mobilized world, even broad international coalitions have limits to what they can accomplish.

Donald Trump may well be the next president of the United States or he might never merit more than an obscure footnote in the broad sweep of American history. In this election no possible outcome can be safely ruled out. But Trumpism is not the creation of Donald Trump, he is simply the vehicle by which it is expressing itself.

Regardless of the outcome of the 2016 elections and what happens to Donald Trump, those factors that are shaping public resentment against the consequences of globalism across the developed world and the role of US foreign policy in promoting and defending it will remain. So too will the growing realization of the unsustainability of US economic and military overreach in the twenty-first century. All three factors will continue to exert a powerful influence on politics in both the US and elsewhere in the world regardless of what might finally happen to "The Donald."