What should Donald Trump's new Cabinet be focused on when they take office in January? How about food?

This does not mean we want the Trump Cabinet to be thinking about dinner plans, but rather food for the world's hungry. There is no more important foreign policy goal than for the United States to fight world hunger. Food is peace.

The Trump administration needs to pay attention to hunger. A tale from 1947 shows us why.

It was the day after Christmas in the White House and not a creature was stirring, except President Harry Truman's Cabinet Committee on World Food Programs. The Committee, set up to fight hunger after World War II, presented an urgent report to Truman on that day. 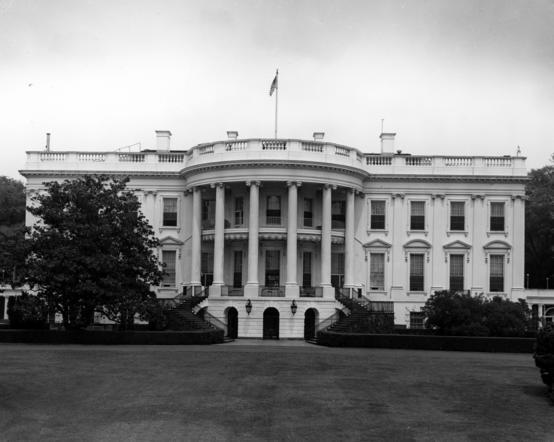 A top priority for the Truman White House was fighting world hunger. In fact, the first televised address from the White House in 1947 was about fighting hunger in Europe. (National Archives photo)

Their post-Christmas report was on how much food the United States could give to Austria, Italy and France. These were nations at terrible risk that winter from food shortages.

Without food nations could not rebuild from the war. As Marshall said, "Food is the very basis of all reconstruction."

The December, 1947 Interim Aid program of the United States sent much food to Europe. This noble act of generosity preceded the famous Marshall Plan, which ultimately rebuilt Europe and its economy. Without the food, the Marshall Plan could never have succeeded.

Truman's Cabinet Committee on Food was instrumental in getting supplies to the starving nations, and also mobilizing public support. After the Committee released a much-publicized report in September on drought and food shortages, citizens took their own action. The Friendship Train, the Silent Guest program of CARE packages, and the Catholic Relief Services food drive all took place after news of the hunger emergency came out.

As the new Trump administration takes over in 2017 they will find hunger emergencies around the globe. The wars in Syria, Iraq and Yemen are three of the largest hotspots. Each of these conflicts has led to large-scale displacement of civilians, loss of livelihoods and the destruction of farmland. Famine lurks over these war-torn countries.

When the Trump Cabinet meets to discuss how to bring peace and eliminate the terrorist threat in the Middle East, they must consider the bigger picture. When they do, they will find that hunger and malnutrition are a huge crisis.

Without food no nation can find stability, peace or develop a robust economy.

Terrorist groups, like ISIS or Boko Haram, thrive in countries where there is chaos and hunger. The African nations affected by Boko Haram's reign of terror are extremely impoverished. 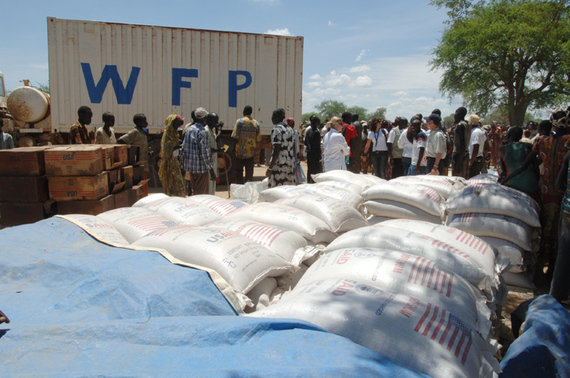 The World Food Programme has the difficult task of feeding civilians displaced by war and drought. (photo UNMIS/Issac Gideon)

The UN World Food Programme (WFP), the largest hunger relief organization, struggles to have enough funds to feed war victims from the Boko Haram war zone, Syria and other crisis points. The UN food agency depends on voluntary donations from the United States and other countries.

One thing the Trump administration can do is strengthen our tools that fight world hunger. Especially now with so much conflict around the globe, we have to step up our performance.

Not only is conflict causing hunger, but so too are drought and other disasters. Hurricane Matthew leveled Haiti's agriculture. Drought is affecting Africa and causing major food shortages. Food aid and agricultural recovery are vital for these disaster areas.

Much like the Truman administration responded to the post World War II famine threat, so too must we be vigilant today in preventing nations from literally starving to death.

The U.S. Food for Peace and Feed the Future are vital to helping alleviate world hunger.

Catholic Relief Services, which receives funding from these and other U.S. programs, says, "We look forward to such work with the Trump Administration, hopeful that the United States will continue its long bipartisan tradition of helping the poor, hungry and marginalized people around the world."

Rick Leach of the World Food Program USA says, "A program that fights hunger and promotes education, the George McGovern-Robert Dole international school feeding program, bears the names of two Senators from opposing parties and serves an enduring symbol of the bipartisan support around ending global hunger. I am confident that this American tradition will continue in the next Administration."

Bread for the World has made six recommendations for the Trump administration to reduce hunger at home and abroad.

The Trump administration, Republicans and Democrats, can work together to fight hunger. Let's encourage them to maintain this noble fight and not be distracted by the other issues of the day.

For you cannot have peace if people are starving. Truman's Cabinet recognized this, and we must hope the new Trump administration learns from their outstanding example. Peace depends upon it.