When President Donald Trump and first lady Melania Trump neglected to say a core Christian statement of belief during former President George H.W. Bush’s funeral this week, indignant tweeters were quick to cite it as proof that Trump isn’t the great defender of Christianity some evangelicals have made him out to be.

But the Trumps’ failure to recite the Apostles’ Creed or to sing some hymns during the service wasn’t a big deal to some of the president’s staunchest evangelical supporters.

Franklin Graham, son of the late evangelist Billy Graham and a longtime Trump ally, came to the president’s defense on his popular social media accounts. Graham compared Trump’s critics to “Pharisees,” a group of Jewish scholars portrayed in Christian scriptures as opponents of Jesus. The term is seen as loaded by some people who believe its use as a pejorative has an anti-Semitic history.

Graham added that he often doesn’t sing in church, either.

“Why? Because I can’t carry a tune! And, I have no rhythm,” Graham wrote on Facebook. “Look around in church sometime—lots of people aren’t singing.”

“Isn’t it a shame that the media and the Trump-haters couldn’t even let the funeral of a well-loved president go by without trying to find fault with President Donald J. Trump? Shame on them,” Graham added. “Nay-sayers always pointing an accusing finger.”

Graham urged his followers to be thankful for “all of the incredibly positive things [Trump] has done for our country (it’s a long list).”

The Pharisees are after @POTUS because he didn’t sing at the funeral of President George H.W. Bush or recite the Apostles’ Creed. Well, guess what. I can’t sing either, and so I generally don’t. 1/2

It's a shame the media & Trump-haters couldn’t even let the funeral of a well-loved president go by w/out trying to find fault w/@POTUS @realDonaldTrump. Shame on them. We should be thankful for all of the positive things he has done for our country. 2/2 https://t.co/5EKqooxNFx

The Apostles’ Creed is an ancient Christian statement that lists some of the core doctrines of the faith. It isn’t found in its full form in the Bible, but it holds an important place in Christian history. Today, Christian denominations that use a fixed liturgy often say it in unison during worship services as an affirmation of faith.

The creed is used by both Catholics and Protestants. The version of the creed used in Episcopal services, like Bush’s funeral, includes a pledge to believe in the “holy catholic” church, which most Protestants take to mean the universal church, not the Roman Catholic Church.

The Billy Graham Evangelistic Association, over which Franklin Graham serves as president and CEO, calls the Apostles’ Creed the “basis” for other professions of faith. The creed is also used by Presbyterians ― the denomination that Trump grew up in and still identifies with.

Robert Jeffress, pastor of First Baptist Dallas Church in Texas and another one of Trump’s evangelical supporters, told HuffPost in an email that he’s heard Trump recite the Lord’s Prayer at a White House dinner and sing a Christian hymn at Billy Graham’s funeral. The criticism over the president’s failure to recite the Apostles’ Creed was a “manufactured controversy” created by “perennial Trump haters” who want to insert a wedge between the president and “his unshakable evangelical base,” Jeffress said.

The pastor said that there are times he doesn’t recite the scriptures or sing hymns in his own church because he’s distracted.

“I imagine the leader of the free world has a few things on his mind, as well!” Jeffress wrote.

In addition, Jeffress said that Trump’s actions are ultimately what matter the most, citing a Bible verse that states that faith without works or actions is dead.

“Historic Christianity teaches that it is not the words of a creed we mouth that make us a Christian, but the faith in Christ we embrace,” Jeffress wrote. “By his works, President Trump has become the most faith-friendly president in history.”

On the other side of the spectrum, some progressive Christians were glad Trump didn’t say the creed.

I’m glad he didn’t say the creed. One less chance for him to once again make a mockery of what I, and millions, actually believe by exploiting it for political gain.

Rev. Adam Taylor, executive director of the progressive Christian organization Sojourners, told HuffPost he thinks Graham, Jeffress and other evangelical supporters of the president are often too quick to defend the president while ignoring actions Trump has taken that “violate both Christian conscience and shared American values.”

Still, he doesn’t think it’s appropriate to try to determine the authenticity of Trump’s faith based on whether he publicly recited the Apostles’ Creed at Bush’s funeral.

“What Christians and our nation should be much more concerned about is the pattern of deeply unchristian words and sentiments that President Trump has uttered while in office- from his pathological lying to his vicious and demeaning attacks on his enemies to his often xenophobic, racist and misogynistic rhetoric,” Taylor said.

CORRECTION: This article previously referred to the Apostles’ Creed as a “prayer”; rather, it is a statement of belief. 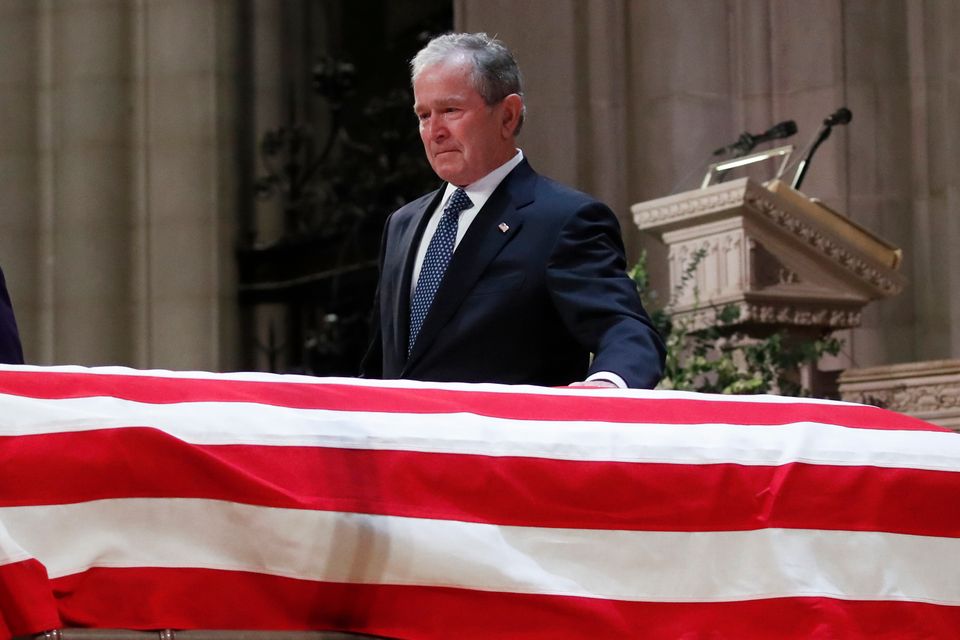