Legitimate or not, Donald Trump is President. His public support - under 40% -- is unprecedentedly weak. Even George W. Bush, after being elected by the Supreme Court, had inaugural approval of 62%. The crowd on the Mall for his inauguration was sparse; its applause tepid. (Compare Obama's Inaugural crowd on left with Trump's on the right below. All that white.) 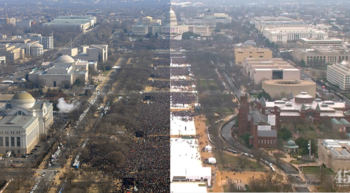 The speech itself - dark, nationalistic, and pugnacious - signaled that on trade and foreign policy, Trump will break the existing Republican mold. His appointments in that realm are compatible with the proclaimed vision of "America First," and the idea of "Buy America and Hire America."

But other parts of the speech, and the rest of the Trump Transition, make clear that on jobs and middle-class prosperity Trump's Great Betrayal of his own voters has begun (His first economic policy change: raise mortgage rates for the poor.)

Trump's most plausible promise to restore blue collar jobs and wages, his pledge to bring America's infrastructure up to global standards, "second to none" has now been put a distant back burner. Chief of Staff Reince Prebius said it certainly wouldn't come up in the first nine months. Trump conceded it wouldn't be a core issue "in the first few years" of his Administration. As candidate, Trump promised that he would bring back those coal mining and manufacturing jobs that were vanishing during the Recession. Now the coal industry concedes that repealing Barack Obama's environmental regulations will do nothing for Appalachian coal miners. When coal state advocates tried to guarantee continued health care benefits for miners, Republicans in Congress blocked them - Trump didn't lift a finger. Trump's first intervention to bring manufacturing jobs back - getting Carrier to keep in the US a plant slated to move to Mexico - came with a hidden poison pill, subsidies that Carrier will use to automate the plants and the eliminate the jobs anyway!

The man who promised he would be good for average Americans because he was different than other Republicans has appointed a cabinet that embraces the entire conservative assault on the middle class. After pledging to safeguard Social Security or Medicare, Trump appointed a strong advocate of slashing both to run them. Congressional Republicans promptly revived their classic proposals to shred the senior safety net of Trump's senior supporters. On the campaign trail Trump defended Planned Parenthood's broad health services for women: "So you can say whatever you want, but they have millions of women going through Planned Parenthood that are helped greatly." Tom Price, his Health and Human Services nominee seems determined to eliminate not only funding for Planned Parenthood but guarantees for contraceptive access through any provider. Trump pledged that his replacement for the Affordable Care Act would "broaden healthcare access, make healthcare more affordable and improve the quality of the care available to all Americans." Price is the author of proposals that would do none of those three.

Trump is still claiming that he will be a fierce advocate for clean air and water; that under his Administration a scandal like Flint "would not have happened." His chosen EPA Administrator, Scott Pruitt, has made a career of attacking regulations to protect the public from pollutants like mercury and ozone, or to protect even his own state's waterways from pollution by out of state poultry interests. Pruitt attacks the very idea of strong national health standards for air and water for every American as "one sized fits all" federal overreach.

It's not unusual for new Presidents to eventually discover that some of their campaign promises can't be honored - or that the political price is too high. Bill Clinton didn't strengthen fuel economy standards for Detroit. George W. Bush didn't clean up dirty power plants. Barack Obama didn't renegotiate NAFTA, or close Guantanamo.

But such retreats usually happen after the Inauguration, and slowly, as the depth of the opposition to campaign pledges emerges. Most new Presidents try hard to live up to their promises. Never to my knowledge has an American President simply walked away, wholesale, from such a huge swathe of his campaign pledges by appointing a cabinet whose core instincts appear to be so deeply at odds with the core of his candidacy.

Indeed, there are strong suggestions that Trump is drifting towards a new, quasi-parliamentary form of American governance, in which the President sets the tone and rhetoric, and runs foreign policy, while the Vice-President, Cabinet and Congress manage the domestic compass under cover of the President's presumed popularity.

The most important Trump supporters - the true "swing" voters in today's electorate - are those who supported Obama in 2009, and turned to Trump this year. These voters rejected Hilary Clinton, but also rejected Republican alternatives, candidates like Ted Cruz, Marco Rubio and Jeb Bush, with their tired combination of fealty to plutocrats and patriarchal social values. For these swing voters, the news is already very, very bad. The very Republicanism they rejected, and that Donald Trump mocked, is back in the saddle in Washington - beginning its work before Trump had even taken the oath of office.

Sadly, the majority of Americans, who rejected both extreme Republican reaction and reckless Trumpism now face a horrifying and even worse combination. From the cabinet and in congress conservatives will mount a massive assault on the progress of the last seventy years, while authoritarian nationalism and a "you're fired" management philosophy dominate Trump's White House.

Most of us - and it is most of us - now face a double challenge. We must craft effective resistance to the threats posed by Trumpism mashed up with Cruzism, while (more challengingly) understanding how progressives let so many Americans down so badly that Trump and the Republicans could win, and what must be done to remedy that deeper catastrophe.