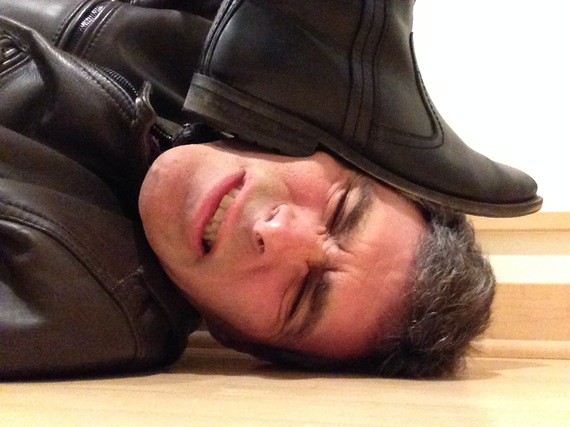 President Trump, how did you become the first three-term president since FDR?

The 2016 electorate was a bunch of morons -- I love uneducated people! I told them what they wanted to hear. The media were idiots, giving me free coverage as the greatest entertainer to run for office, better than Reagan. Republicans were a disaster, couldn't figure out what they stood for. Religion? Guns? Immigration? Who cares?? It's all about power and fame. That's why the party is now called Trump & Co.

But the 22nd Amendment limited presidents to two terms. How did that get changed?

It didn't! When McConnell and the Senate refused to consider Hussein Obama's Supreme Court nomination, I got to install Christie, that bootlicker, who harassed the court. We waterboarded a couple of them to make them play ball; Ginsberg cried like a little girl! Then Sotomayor and Kagan retired, those fat, ugly quitters. I nominated that dimwit Carson and my son, Don Jr., so the court sang my tune! They reinterpreted the First Amendment so nobody can challenge the president; it's unpatriotic!

You solved the problem of a do-nothing Congress.

Absolutely, Bret. I run Congress like a reality show! I had their chambers remodeled to look like my board room. If a Senator or Representative doesn't fall in line, "You're fired!" Trump News Channel's show, Congressional Apprentice, has ratings through the roof!

Why did Democrats fade as a party?

Sanders split their party and handed me the 2016 election. Why didn't he run for the Socialist Party? When somebody runs for a party they don't belong to, it tears that party apart!

Then Congress passed the national Voter ID law; you need your original birth certificate and driver's license. Voter turnout tanked. Even Obama can't vote now 'cause he wasn't born in the US!

Not even other political parties can challenge the president. Justices Carson and Don Jr. will make sure those clowns never see the light of day if they run against me.

You promised white working-class men you'd restrict free trade and bring back jobs from China and Mexico, but their employment has actually declined. What do you say to them?

You're kidding, right? I'm a billionaire. I've got nothing in common with those people. "There's a sucker born every minute."

Weren't you disappointed with the Southern Wall situation?

No, my building businesses made a killing! American labor's cheaper now than foreign workers. I figured Sanders was on to something with his "free college" pitch. So Trump College gave free college degrees to everyone; $10,000 to print a diploma was still a bargain! That flooded the job market with college grads, making the degree worthless. Those losers are all working for minimum wage now.

But the wall turned out to be useless...

Yeah, Mexicans scaled the wall, dug under it and went around it in boats. Nobody saw that coming! So I ordered the Army to invade Mexico, and we took over the country by eminent domain! Now we tax Mexicans to pay for the wall.

You never finished the Northern Wall...

Duh, across the Great Lakes? But I wanted Canada for water and farming, so we invaded their capital, Toronto? Vancouver?

Who cares now? Congress renamed all our territory Trump's North America, the Greatest Continent in the World! Speaking of branding, I installed David Duke as Mayor of New York, which he obligingly renamed Trump City 'cause I own so much of it. Duke deported the Jews, Blacks and Muslims to Palestine and Africa. Now there's plenty of space to drive and park my cars. Our country IS great again!

And health care and Social Security?

We made assisted suicide legal, then a big media event! At 80, people get 15 minutes of fame on cable's Death Channel. The ratings are fantastic! Way better than the public hangings.

President Trump, you're like a king or a dictator now.

WHAT??! You dare compare me to some two-bit ruler? I own your media company! YOU'RE FIRED! Get me a new reporter, say that cute blonde, Megyn Kelly.