Until 16 months ago, the core question of the presidential campaign − over and above matters of justice and fairness, peace and war and the survival of the planet − was whether we the people of the United States of America would choose a qualified woman to lead our country for the first time in 227 years of elections.

But on June 16, 2015, Donald Trump announced he was running for president, and his bizarre insurgency has been the campaign's driving story ever since. With only a month until Election Day, the self-branded real estate marketer remains a serious contender for the role of Most Important Person on Earth.

Media and political speculators have been trying to make sense of his erratic run as we've gone along, but this sort of thing, whatever it is, tends to resist instant analysis. More thorough and hopefully more enlightening explorations of the Trump phenomenon are likely to go on for years, creating scores of research jobs in the political, social and maybe even medical sciences.

What continues to puzzle me, however, is something much more ordinary: the disconnect between what Trump supporters see in him and what's actually there.

I don't mean the peripheral stuff like Trump's unproved boasts that he's a billionaire and brilliant in business, the disproved notion that he's a champion of working class and middle class Americans or his definitively proved serial lying.

I'm not even referring to the hilarious claims that his donations to public officials in exchange for access and favorable treatment and his use of IRS rules for maximum personal benefit to the ruination of investors, suppliers and employees make him the only person who can root out political corruption and reform the tax code. By that reasoning, I guess he's also the only one who can stop rich guys from creating personal charitable foundations and using other people's contributions to pay their business debts.

No, I'm talking about what many Trump supporters say is the main reason they're backing him: Trump rejects, condemns and defies political correctness, his supporters say. He speaks his mind, and if that offends some people, well that's their problem, not his.

This idea resonates with a lot of Americans, particularly white folks whose families have been in the U.S. for generations, people who were born here, raised here and have tried to work hard to improve life for themselves and their children. Instead, they feel themselves slipping backward and becoming invisible, convinced that American culture is being appropriated by people of different ethnic, racial and religious backgrounds, including millions of illegal immigrants.

And political correctness, as they see it, means they're not supposed to complain about any of this.

That racial resentments simmer below the surface and stoke at least some of these perceptions is hard to quantify and impossible to deny. Nevertheless, political correctness is a controversial social force in a nation with a constitutional guarantee of freedom of expression, and it raises legitimate issues well worth discussing and debating.

But that's not what Trump is doing. He's not a rebel speaking unpopular truths to power. He's not standing up for honest discussions of deeply contentious issues. He's not out there defying rules handed down by elites to control what we say.

All Trump's defying is common decency. 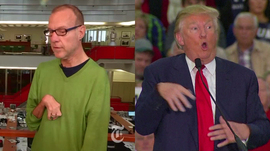 Decent people object because the things Trump says and promotes betray the fundamental American values that bind us together, however imperfectly. They object because what binds us together is not the place of our birth or the color of our skin or the faith we profess or the accent in our voice but our belief in the equality of all people and in our capacity to strive together to improve our society and our flawed selves, as hard as that can be, and to look out for and help take care of each other.

Because that's what decent people do.

A version of this column originally was published by the St. Louis Jewish Light.