That was the way many pundits reacted last week when NBC News and the Wall Street Journal released a national poll of Republicans and found the real-estate mogul and reality-TV star receiving the backing of 17 percent of likely voters and tied with former Ark. Gov. Mike Huckabee for second place, just four points behind ex-Mass. Gov. Mitt Romney, who was at 21 percent.

Now today, a nationwide Republican poll from CNN should throw more fuel on that fire. It shows Trump tied with Huckabee at 19 percent each, followed by the 2008 GOP VP candidate Sarah Palin (12 percent), Romney and former House Speaker Newt Gingrich (11 percent each).

But all three surveys involve relatively small subgroups of Republican identifiers: just 238 interviews for NBC/Wall Street Journal, 344 for Fox and 385 for CNN. Since smaller sample sizes make for larger margins of error, the numbers are going to bounce around.

With that in mind, these results should be treated with caution. The horse race numbers change often early in a campaign and, more important, Trump begins with a much larger unfavorable rating among Republicans than the other prospective candidates. Nevertheless, Trump's increasingly strident political commentary has sparked a notable rise in his numbers with the Republican base. 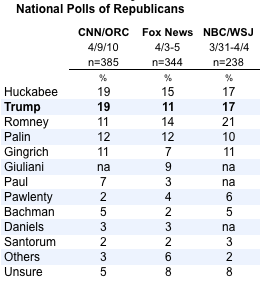 The three most recent surveys are consistent, however, in showing that no single Republican candidate dominates the race, even through the prospective field includes four or five widely familiar names: Huckabee, Romney, Gingrich, Palin and now Trump. The small differences in expressed preference between the best known candidates mean little at this point, especially since the early primaries have the potential to significantly boost one of the lesser known candidates and completely transform the race. But the lack of a dominant national frontrunner is important.

New Hampshire, however, is a different story. A poll of New Hampshire Republicans conducted by the Democratic firm Public Policy Polling (PPP) found Mitt Romney to be a "clear front runner," winning between 31 and 40 percent of the vote when matched against various combinations of challengers. When PPP added Trump to the list of candidates, however, Romney's share dropped to 27 percent with Trump in second at 21 percent.

But that result deserves a huge caveat: PPP first asked five different horse race questions, each featuring six to eight candidates, before adding Donald Trump to the list and repeating the question for the sixth time. It is possible that the result was something of an artifact -- an inadvertent push to a familiar name created the repetition of a set of slightly different lists of less familiar candidates.

On candidate favorability ratings, as opposed to horse race questions, Trump enjoys nearly universal name recognition, but it comes with the baggage of high negatives -- even among Republicans.

This week, for example, Gallup released results of a national survey showing Americans with "mixed opinions" of Trump, with fewer rating him favorably (43 percent) than unfavorably (47 percent). His favorable rating among Republicans is better (52 percent) but the unfavorable rating (37 percent) appears to be the largest of the prospective Republican field.

Gallup's ongoing Republican image tracking asks a slightly different set of questions to measure name recognition and favorability, and they have not yet added Trump to this tracking. The table below shows favorable ratings from the week of March 21 to April 3, shared last week with The Huffington Post. While these ratings are not strictly comparable, Trump's 37 percent unfavorable rating would lead the field. Only Sarah Palin's unfavorable rating (27 percent) comes close. 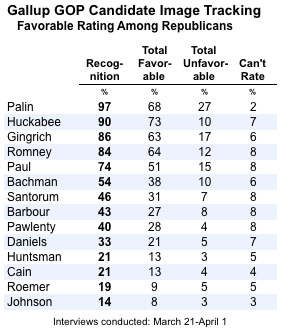 Similarly, CNN's new polls finds that 56 percent of Republicans want to see Trump run for president but 43 percent do not want him to run.

So while Trump begins with a level of visibility and name recognition that many of the other Republicans lack, he also retains significant negatives that will likely limit his appeal in the all-important early primaries.

Gallup has tracked Trump's favorable rating four times in the last ten years, and as they report, "Trump's public image is roughly the same now as it was in September 1999," just before he formed a committee to explore running for president as a Reform Party candidate.

TRUMP IS A TEA PARTY FAVORITE

So is Trump really a frontrunner? The answer appears to be no, if only because Republican preferences at this point are so bunched up and tenuous. The 2012 GOP presidential nomination race lacks a dominant leader and polls show no consistent rank in voter preferences among the three to five best known candidates.

What is interesting and different about the latest polling, however, is the recent rise in Trump's ratings among Republicans. As Gallup reports:

Republicans are more positive about Trump than they were four years ago, while Democrats are more negative. Trump's image was similar across partisan groups in January 2007, when his favorable rating was 43% among Republicans, and 40% among both independents and Democrats.

Trump's improving image among the Republican base says something. As PPP's Tom Jensen puts it, "Trump's the only prominent Republican considering the race whose numbers have gone in the right direction with the party base of late." How far that goes remains to be seen.