Sports have always attempted to be a safe haven from politics. This could explain why so many diverse people gravitate to sports. Athletic competitions around the world have often been the one place where race, religion, gender and political affiliation did not matter. There is no greater example of this than the Olympic Games. Interestingly, golf will be one of the sports contested in the 2016 Summer Olympic Games in Brazil returning after last being played in the 1904 Olympics. Bizarrely, the game of golf, one of the calmest and least aggressive sports on the planet, now finds itself caught in a political crossfire regarding diversity.

Earlier this month, Donald Trump, the owner of 18 golf courses with a string of major tournaments lined up at some of the venues, came under fire for his comments regarding the moral character of illegal immigrants. The major golf governing bodies released a statement distancing themselves from Trump's remarks.

"In response to Mr. Trump's comments about the golf industry 'knowing he is right' in regards to his recent statements about Mexican immigrants, we feel compelled to clarify that those remarks do not reflect the views of our organizations," the statement read. "While the LPGA, PGA of America, PGA Tour and USGA do not usually comment on Presidential politics, Mr. Trump's comments are inconsistent with our strong commitment to an inclusive and welcoming environment in the game of golf."

As a result the PGA of America pulled its tournaments, the Grand Slam of golf and its annual PGA Junior League Golf Championship, from the Trump National Los Angeles golf course and ESPN moved the ESPY Celebrity Golf Classic from the Trump course in Los Angeles to Pelican Hill Golf Course.

Both the LPGA and the Ladies' Golf Union have issued statements distancing their organizations from Trump in response to inflammatory remarks and the organizations do not want to appear to condone his political agenda. However the LPGA and Ladies' Golf Union are holding the upcoming Women's British Open at a Trump-owned golf course. A statement released by Mike Whan, commissioner of the LPGA, read "At the current time, plans are to continue to stage the RICOH Women's British Open at Turnberry. With just three weeks until the championship, a change in venue for this prestigious major simply isn't feasible without significantly diminishing the event. By no means, however, does this decision suggest support for Mr. Trump's comments. The LPGA will continue its commitment to diversity and inclusion in the game of golf as it has done for the last 65 years."

This did not sit well with Trump, who wrote a letter to Whan telling the LPGA that if they did not like his statements he would permit them to cancel their contract and move the British Open to another golf course. Upon learning this news it appears another business mogul, David Southworth, who owns a number of golf courses including Machrihanish Dunes Golf Club in Scotland offered his assistance to the LPGA commissioner. Mr. Southworth penned the following letter in hopes of offering support and perhaps a smile:

It has come to the attention of the golf world that you have been given the option of moving the upcoming 2015 Ricoh Women's British Open to a better venue. I am writing to you today to offer the use of Machrihanish Dunes Golf Club should you decide that you do, in fact, wish to move the tournament.

As I'm sure you know, Machrihanish Dunes is a championship links golf course on Scotland's beautiful Kintyre Peninsula. The course, which was designed by renowned course architect David McLay Kidd, measures 7082 yards from the black tees. There's no doubt in my mind that its blind shots, cavernous bunkers and vexing greens would present a formidable test for this year's entrants. As always, the course is in superb condition, and, weather permitting, I am sure that the players would greatly enjoy it.

While it is true that it might prove difficult to re-stage all of the event support infrastructure required for a tournament like the Ricoh Women's British Open at this late date--and that the site's SSSI status and the environmental safeguards associated with that would greatly limit the number of spectators who could be allowed on to the course--the good news is that the rough at Machrihanish Dunes is maintained, in part, by a very friendly (and photogenic) herd of Hebridean Black Sheep, who would add greatly to the event's atmosphere and also constitute a very knowledgeable gallery for the players. In addition, you will be happy to know that Machrihanish Dunes is less than 100 kilometers from Ayrshire, where you had originally been planning to host this prestigious event. So not so far away, really.

Finally, I would be remiss if I didn't point out that The Old Clubhouse Pub at The Village at Machrihanish Dunes has the absolute best Mexican food in Scotland, and is the birthplace of haggis nachos. No doubt this would be well received by the event's players, caddies and officials.

In short, we stand ready to assist the Ladies' Golf Union, the LPGA and the Ladies European Tour in every way should you wish to move the 2015 Ricoh British Women's Open to Machrihanish Dunes. If you need us, we'll be here.
Adios for now,
David Southworth
President & CEO
Southworth Development 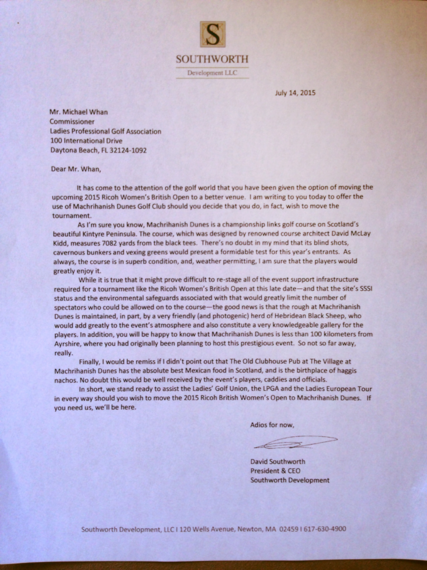