Trump says he will be the first candidate since 1976 not to release tax returns. Analysts said that Trump likely pushed the envelope to turn ordinary income into capital gains, and deferred the payment of tax through like-kind exchanges, said the MarketWatch report. The tax returns could also verify how much income he receives from licensing his name.

In fact, they could show much more--for instance, how much of his fortune was made from defrauding other investors. Trump's sordid business dealings are known to very few, as I've said in past columns. And now Donald Trump will go to trial in a class-action lawsuit against him and his now-defunct Trump University that includes the Racketeer Influenced and Corrupt Organizations Act, or RICO charges, after the presidential election but before the inauguration, setting the stage for a president-elect to take the witness stand if he wins the White House.

One of his 4 Chapter 11 (business) bankruptcies was for Trump Casinos and Hotels. "For 10 years between 1995 and 2005, Donald Trump ran Trump Hotels & Casino Resorts -- and he did it so badly and incompetently that it collapsed into Chapter 11 bankruptcy," said Marketwatch's Brett Arends, who has been tracking his business failures for years. "His stockholders were almost entirely wiped out, losing a staggering 89 percent of their money. The company actually lost money every single year. In total it racked up more than $600 million in net losses over that period," something no other major casino chain did over that term. 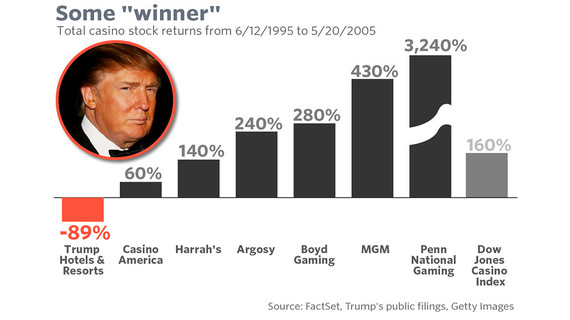 In total, Donald Trump pocketed $32 million in nine years of running Trump Casinos and Hotels, while his public stockholders lost more than $100 million. But much more damaging are the various class action lawsuits filed again Trump and Trump University, which was a university in name only.

Instead of receiving a quality degree, "as good as any from a university", said Trump, students received a printed certificate and no degree after spending as much as $36,000 on a weekend course that solicited more money, and were given commonly known real estate websites, such as Zillow, and several worthless property referrals.

These are the words of several plaintiffs suing Trump that a San Diego court has elevated to gangster status. Trump is accused of not only fraud, but racketeering, as if he were running a criminal enterprise.

U.S. District Judge Gonzalo Curiel last Friday scheduled trial for Nov. 28 in the suit that alleges people who paid up to $35,000 for real estate seminars got defrauded. The likely Republican nominee planned to attend most, if not all, of the trial and would testify, Trump attorney Daniel Petrocelli said.

"This means that, fairly or unfairly, opponents will be able to say that a large group of everyman voters, many of them elderly, have accused a leading contender for the Oval Office of being a racketeer," said Time Magazine's Steven Brill, who has been following the progress of this lawsuit, initiated more than five years ago.