With Donald J. Trump set to be sworn in as the 45th President of the United States, it is important to take a look at the impact of one of his most radical policies - the tax policy - that can have a profound impact on the American economy and the lives of millions of American citizens. Specifically, it is interesting to assess the potential impact of Trump's tax policies on the U.S. economy in terms of renowned economist John Maynard Keynes' Keynesian multiplier model.

Trump is promising huge, permanent, and regressive tax cuts that would reduce the top individual income tax rate to 33%, low income tax rate to 0%, and the corporate tax rate to 15%, while eliminating the estate tax (Wolf). Experts predict that these tax cuts will result in higher budget deficits, and reduce federal revenue by roughly $12 trillion over the next decade (Irwin).

A key assumption in this model is that when taxes decrease, government spending and investment spending (which is spending done by firms and businesses) do not change. Based on this, lower taxes will increase disposable income, which will increase consumption spending (amount of money spent on consumer goods and services), and therefore increases Gross Domestic Product (GDP) and employment.

The total spending in the economy by consumers and businesses is measured as Aggregate Planned Expenditure (APE). According to the Keynesian multiplier model, as you correlate APE or planned consumption C* to GDP or national income Y (as shown below), tax cuts cause the intercept of the aggregate planned expenditure (APE) curve on the multiplier model to shift up. In other words, for the same level of national income, the planned consumption increases with tax cuts. 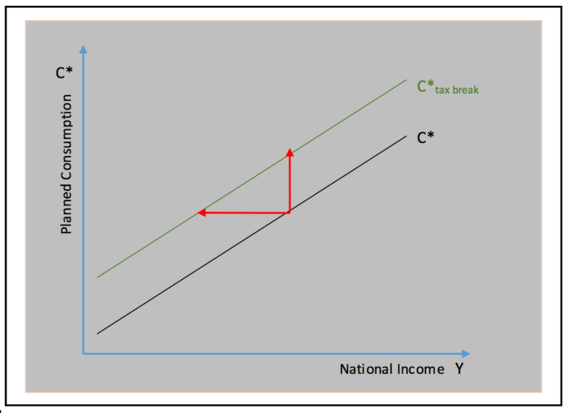 The net impact of taxes on economy is measured as a Multiplier, and is calculated by , where the MPC is the marginal propensity to consume (extra amount consumed by consumers with extra dollars of disposable income). The MPC is calculated by (consumption change divided by income change). There are two rounds of multiplier in the economy:

The first round of the multiplier is where the change in spending is determined; when "G" (government spending) or "I" (investment spending) increases, and money is spent on goods and services. However, tax cuts skip the first round of the multiplier and, hence, are not as effective as fiscal policy (government spending, "G") and monetary policy (investment spending, "I") in stimulating the economy. The fiscal and monetary policies impact the economy by directly increasing spending, which then flows into disposable incomes.

What does all of this mean to Trump's tax plans? His tax plans indicate that the highest-income taxpayers ($3.7M+) would receive an average tax cut of 14%+, while taxes for the poorest fifth of the population would fall only by 0.8% on average (Wolf). In essence, Trump's tax cuts will really only benefit the wealthy, which would limit the boost to demand (Irwin). A reduction in taxes that benefits only the rich can lower the MPC, and thus hinder any positive impact on the economy. However, if tax cuts increase business confidence and profits, it might lead to more investment.

The impact of Trump's tax policies is graphed below. For example, let's assume that Trump reduces taxes by $300 billion, and the overall MPC in the economy is , i.e. for every 4 units of income change, there is 3 units of consumption change. The slope in the model would be , since the MPC is the slope. The new line, , will shift across by $300 billion. To determine how much it shifts up, we calculate , which is equal to , or $225 billion. Disposable income increases by $300 billion, but spending increases by only $225 billion, as some of it is saved. 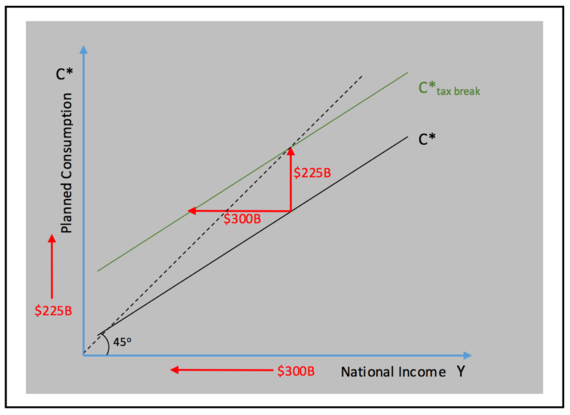 The graph above represents the "perfect situation" in an economy, but if tax cuts actually lower the MPC, then the multiplier would decrease and the total change in spending and output would decrease even more, resulting in the line being pushed down on the graph. If these tax cuts increase business confidence and therefore lead to an increase in investment spending, then the line would be pushed more up on the graph. In essence, this graph could change from its current state, as the economy is never always in a "perfect situation."

Looking ahead, Trump's proposed tax policies have the potential to increase disposable income, investment spending by firms, and the budget deficit, while reducing national income and the MPC. The true economic impact of Trump's presidency remains to be seen.