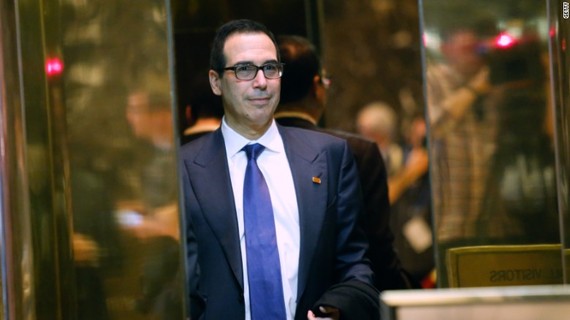 Donald Trump ran for president claiming he would end a rigged economic system that works against working people. But Trump's pick of Steven Mnuchin to run his economic program--including tax policy--shows his real plan is to slant the system even more in favor of billionaires like himself, Mnuchin and their pals on Wall Street.

Mnuchin, Trump's choice for Treasury Secretary, has said his top priority will be pushing Trump's $6 trillion tax giveaway that mostly benefits the wealthy and corporations. It's a bonanza for the rich that will require cutting lifelines for working families and retirees like Medicare, Medicaid, school funding, nutrition programs and housing.

It's not surprising that Mnuchin's focus will be on further enriching the already wealthy at the expense of the rest of us. It's practically in his genes and been the guiding principal of his career.

During his campaign, Trump attacked the Wall Street investment bank Goldman Sachs for controlling his political opponents and looting America's working families. But Trump's Treasury pick is part of a Goldman Sachs dynasty: Mnuchin's father spent his entire working life there, his brother worked at the bank, and Steve was there 17 years, eventually becoming a partner after joining the firm right out of Yale.

Mnuchin's work at Goldman included wheeling and dealing in mortgages, the kind of Wall Street financial manipulation of regular people's lives that led to the Crash of 2008 and subsequent Great Recession.

Mnuchin left Goldman in 2002 and soon started his own hedge fund named after the dunes near his Hamptons beach house. When the inevitable crash came, Mnuchin and some billionaire friends scooped up a failed home lender in California. With us taxpayers through the federal government covering much of their losses, Mnuchin and his fellow "vulture investors" turned the bank, in the words of a homeowners' advocate, into a "foreclosure machine."

Then, after wringing billions of dollars of gain from middle-class homeowners' pain, Mnuchin's group sold their foreclosure machine last year for an estimated $1.5 billion profit. The Los Angeles Times referred to Mnuchin's group as the "billionaires' club of private financiers" who made their money at the expense of the government and the consumers whose homes were lost.

As one analyst for The Nation wrote: "Mnuchin and his OneWest colleagues were happy to enrich themselves at the government's expense, but when it came to their customers, they displayed little mercy or compassion."

Mnuchin's such a pro at benefitting from the misfortunes of others he even made $3.2 million from Bernie Madoff's Ponzi scheme, which stole billions of dollars from thousands of other investors.

At every step along the way, Mnuchin's career has been about enriching the "billionaires' club"--regardless if the less fortunate were hurt. He's shown no sense of economic fairness or justice--values that should be the hallmark of the Treasury secretary who sets tax policy and enforces tax laws.

Despite all its flaws due to special-interest loopholes and carve-outs, our tax system is still progressive. It is a crucial--but seriously weakened--means to level the playing field and create an economy that benefits all Americans, not just the wealthy. Unfortunately, nothing in Mnuchin's past indicates he supports that.

It appears Trump has picked the right man to peddle a tax plan that gives away trillions of dollars to the rich on the backs of working families. Mnuchin knows all about creating private gain from public pain.