Trunk Club is a service that every man's girlfriend, wife and/or mother is going to be very, very, very excited about. It is the only startup I've covered that my mom has called to ask me about on a daily basis; my editor, Bianca Bosker, has been bugging me to write about it for weeks. And so, here it is:

The personal shopping startup matches each of its customers (men only!) with a personal stylist who reviews the guy's fashion sense and sends him an ingeniously-folded cardboard trunk of hand-selected, brand-name clothes for him to peruse. The man tries on all of the clothes, pays for what he fancies and sends back what he doesn't, giving his stylist feedback on what worked and what didn't. Despite being called a "club," joining Trunk Club is free and non-exclusive; shipping for the trunks both ways is paid for by the company; and Trunk Club customers only pay money when and if they decide they want to own an article of clothing.

It is built on the same disruptive strategy as Netflix: Why go the movie store when the movie could come to you?

"We were formed with the idea that guys love to look good but hate to shop," Trunk Club CEO Brian Spaly told HuffPost in an interview. "This is not true of all guys -- it's not universally true -- but for the vast majority, they don't really love shopping."

I am the vast majority, I suppose. Pardon me for being the Brutish Stereotypical Man of a bad 1990s stand-up comedy routine, but I dislike almost all aspects of the familiar clothes shopping experience: the poorly-ventilated dressing rooms that smell like stale air conditioning and old flatulence; the faint, cloying music; the endless displays of seemingly identical sweaters and button-down business shirts; the faux-cheery salespeople. Just thinking about suffering through a shopping outing at a New Jersey mega-mall is enough to transform me into a grouch of Andy Rooney-esque proportions.

"It's risk free," Spaly assured me after similarly trashing the traditional storefront model of shopping. "I send you free clothes. You keep what you like, you send back what you don't like, and all it takes is putting a sticker on a box. We don't charge your credit card until we have the box back... That's not that much to ask, is it?"

It was not too much to ask, and so I decided to try Trunk Club. I seemed to be the target customer (male, hates shopping for clothes, has credit card) and the novelty, ease and free-ness of the service had me at least intrigued.

One month and two trunks later, I still do not have any new clothes in my wardrobe. I interpret this as being wholly my fault, rather than any fault of Trunk Club as a service or startup. Here's why:

When a new user first signs up for Trunk Club, he fills out a survey that details his fashion sense -- the general style and fit of clothes he is looking to buy, the brands that he generally prefers -- and is then asked to provide as many of his body measurements that he knows (waist size, pant length, inseam, outseam, etc.) so that the first trunk can be packed with desirable clothes that fit. Within a day or two, before the first trunk goes out, he's assigned a personal "stylist" who calls and reviews the survey answers with him in an attempt to narrow down what items Trunk Club should send in its first shipment.

This conversation took about 25 minutes, during which time Lisa discovered seemingly everything I could possibly feel about clothing: What my favorite article in my closet was (no idea); what cut of jeans I preferred (ditto); whether I wanted Trunk Club to send denim, chinos, sweaters, shoes, hoodies, lightweight jackets, long-sleeve tees, casual polos, slacks, sports coats or basic dress shirts; how I felt about patterns, earth tones, plaids, checks, the color purple, yellow, black, orange. By the end of the interview, I felt like a toddler being dragged by the arm through the shopping mall: This was not where I wanted to be.

The content of the trunk, when it arrived days later, did not help alleviate the feeling that I had been dragged along. My trunk had been packed crisply with four or five well-selected outfits, and also, to my surprise, several articles of clothing that I had said not to include -- a pair of shoes, short sleeve T-shirts (winter is coming, I had reiterated, so I am looking for coats), linen-y button-downs more suitable for a yacht than cold season in New York. Curious. 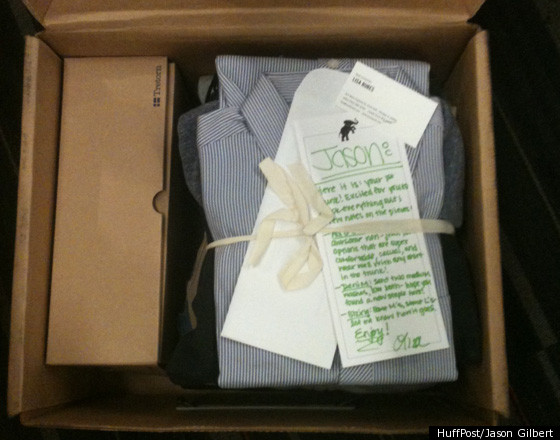 My first trunk, with handwritten note from my stylist

More generally, Trunk Club surprised me not with the clothing itself, but with the price points. Like Gift Side Story, a gifting startup whose gifts I argued were too expensive to catch on in the short term, none of the clothes I received from Trunk Club had price tags that would be appealing ot the 99 percent. Jeans started around $175, and did not go any lower, according to my stylist; a simple gray hooded sweatshirt of soft cotton, which zipped neatly up the front, tantalized me at $230. This should not have come as a surprise, as usual prices are listed on the website FAQ:

(Browse their selection of apparel here.)

What I was receiving was already on the low end, apparently. In its startup phase, Trunk Club is aiming at a wealthier (and, by the looks of the clothes, preppier) clientele. Spaly told me that his bread-and-butter customers included professional athletes and partners at law firms: "married men between the ages of 25-55 with zero time on their hands" -- and, apparently, plenty of money.

I sent my trunk back and canceled my Trunk Club subscription after my first two shipments; though Lisa had tailored my second trunk to include less costly items (and no shoes), I was still staring at mostly triple-digit price tags. As promised, nothing had been charged to my credit card, and I hadn't spent a cent while trying on over 30 articles of clothing in my bedroom at home. The only thing wasted was my time, and poor Lisa's. That Trunk Club currently caters to a higher tax bracket of customers is probably a sound strategy and not necessarily a defect of the company.

If you're a guy, or a man or woman who is concerned about your guy's sartorial choices, you can sign up to try Trunk Club at www.trunkclub.com.