Occidental College boasts a mission to educate a "gifted and diverse group of students"; but when those diverse students demand the education they were promised, they are met with unresponsive administration and bureaucratic abuse. Administration's consistent neglect of Black students and their demands has fostered a painfully tense campus climate, representing feelings of pain and betrayal from Black and non-black students alike. Hence, I write this piece from the office of the Vice President of Finance of Occidental College. I am one of the 400 students who have been occupying this space since Monday November 16th at 12:30 pm, and we will not leave until our demands have been met. 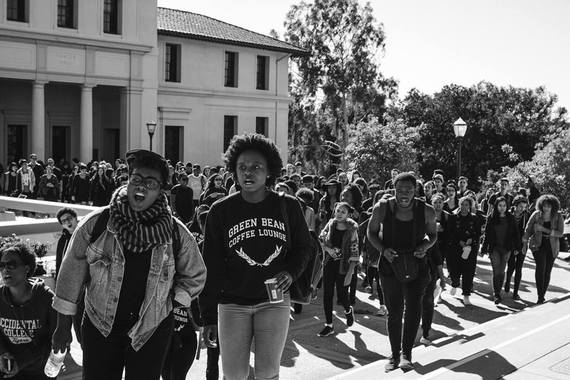 We started this occupation in solidarity with students at Mizzou, Yale, Ithaca, Claremont, and other predominantly white institutions (PWIs) across the nation. We, black students and students of color, have experienced discrimination and mistreatment by administration since our admission. Spectators of this movement have continually expressed confusion surrounding the impetus for this movement, often asking which single event started it all. These students must realize that this movement is a manifestation of the daily microaggressions, discrimination, and other facets of marginalization we come to know as our college experience. It looks like a white student cussing me out my freshman year, calling me stupid when I told him that he couldn't essentialize the existence of Black people to struggling through crime and poverty in "the hood." It also looks like the time that I heard an entire room of white students say n***a at a party my first year. It's the time that my professor refused to speak up in class when a white student referred to black men as "threatening and violent." And again the time that I watched womxn -- black womxn -- around me encounter gross amounts of misogynoir when reporting their sexual assaults. It is everyday that I have to walk through this institution internalizing all of the psychic violence enacted on black students and students of color that makes me believe that I do not belong here. 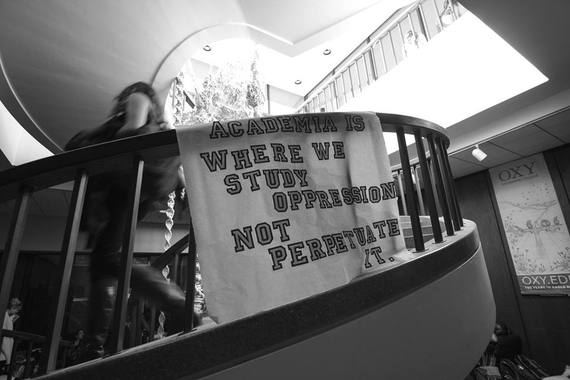 As students, we are willing to let our academic performance suffer in order to ensure our survival. This is why creating safe spaces and protecting marginalized students should be the responsibility of the administration. Failure is not an option. We, Oxy United for Black Liberation, delivered a list of 14 demands to the president last week following a national day of action protest on Thursday November 12th. First on the list of the demands is the immediate removal of President Jonathan Veitch from his position. Since becoming president in 2009, Veitch has only disappointed students. Veitch has been given over 49 demands from three different groups of students; only 3 of those demands have been met. His continued evasion of students' needs has created a culture of irresponsibility. Administration responds to our frustrations with empty conversation that leads to no action; Our distress is met with silence, and we are forced to constantly advocate for ourselves.

Despite the laundry list of negligence, Veitch is nonetheless affirmed in his position. In an email sent out at 4 PM on Tuesday, Chris Calkins, the chair of the Board of Trustees, expressed staunch support for the president. The email was wrought with strategic language about how Occidental is flawed and needs to do better, but was absent of any plans to do so. Veitch was extolled for his supposed accomplishments. One of which being his "tireless[ness] in hiring a diverse faculty and staff." In 2013 the college had 7% black faculty, 10% Latinx faculty, and 12% API faculty. A school where over two thirds of tenured faculty is white can ever be commended for hiring diverse faculty and staff. Additionally, the college had a chance to offer full tenure to its first Native American scholar, but are currently refusing to extend her contract. There is no effort at this college to hire faculty and staff of marginalized backgrounds. Veitch was also applauded for "working through some challenging issues." The cryptic issues that Calkins is referring to are the Title IX suits filed against Occidental in 2013 due to a complete mishandling of more than 50 sexual assault cases. When students voiced their frustrations with the college Veitch vilified faculty and survivors accusing them of "actively trying to embarrass the college." The board feigns as if Veitch handled this issue, but it was students and faculty allies who did the work. While students were restlessly organizing, Veitch was unabashedly supporting accused rapists by welcoming them into his home and defending their character. 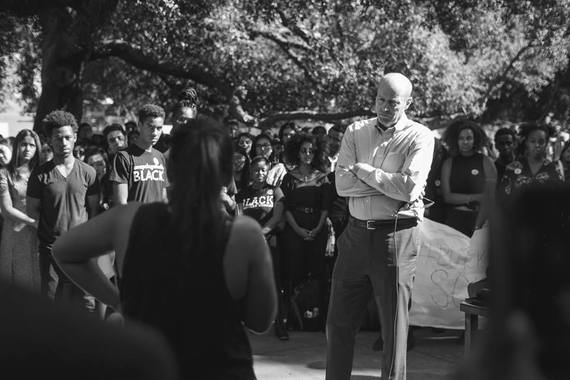 Although the board attempts to deceive students with vague and ambiguous language, we know why Jonathan Veitch is at this school. He announced it to the 600+ participants at the teach-in on Thursday. He is here only make money and to fundraise. Occidental College's 2013-14 annual reports conveys how the school has been allocating its money in the first 6 years of Veitch's leadership. The college has built a new house to accommodate wealthy alum and a million dollar media wall that students rarely utilize. Other expenses include buildings and renovated rooms, but not efforts that seek to enhance the experience of marginalized students. The president is praised for raising money for irrelevant additions to the college. The board of trustees are just as responsible for our discomfort and discrimination as the president because they commend the futile aesthetic additions to the campus instead of demanding a campus where students of color can thrive.

Veitch does not seem to care about students of color, especially Black students, at Occidental because he doesn't have to care. As a white, cis, affluent, heterosexual man he has the privilege to not have to consider the violence I face everyday.The board of trustees continues to increase his salary every year because they only care about what's in their pockets. Veitch brings in money to the college by tokenizing the same students who are imploring the board to acknowledge their suffering. It is impossible for us to exist here. I suffocate in this space.

I will stay in the administrative building and take their space, and make them uncomfortable for as long as I have to. I don't want to have to sacrifice a semester's worth of hard work, but I don't have a choice.We are tired of being led by an incompetent president who literally turns his back on students who are trying to explain why they are suffering at this institution. No one is listening to us. Our experiences and our pain -- our daily oppression -- do not matter to the administration. People of color are identified as problems to manage instead of students to provide for. 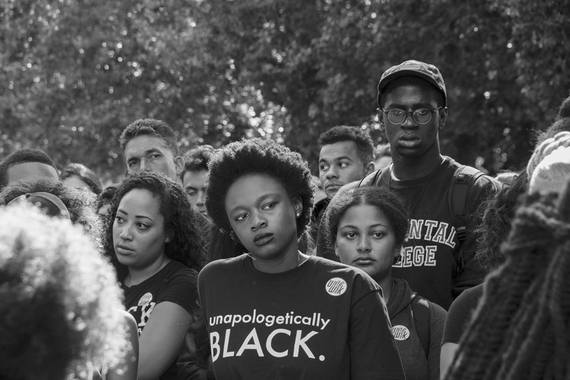