Why trust?
Building trust may be the decisive factor for success in business management in the future, in HR as well as in sales. Trust constructs are shifting from personal/in person relationships to digital connections and, this alone, is creating a new dynamic environment which may inspire insecurity, fear and suspicion from many.
47% of executives that were interviewed by Forbes believed that by 2020 the digital will have an impact on more than half of their sales. As the importance of the digital economy grows, so does the need for trust building with both employees and/or customers. Therefore, one of the key current challenges in the social sciences is to re-think how the rapid progress of technology has impacted constructs such as trust. This is specifically true for information technology that dramatically alters the nature of relationships within any social system or construct.(Luhmann, N. (2005) Risk: a sociological theory.) Business is one such social construct.

The impact of digitalization affects both the macro view of social systems and how these systems impact each other, and the micro view of individual actions.

Micro:
How do we create trusting environments in the new economy? Companies like Philz which aim to bring nurturing and care to their customer experience as part of their product are increasingly successful. CEO, Jacob Jaber, stated at the Recode event in Nov. of last year that their HR department hires people who are nurturers, in other words those who are fulfilled by taking care of others. "A welcoming atmosphere is part of the Philz experience". This will inevitably creates a trusting atmosphere with the consumer, who intuitively acknowledges a "warm and fuzzy" sense and who projects that unto their coffee experience.

Philz is not the only one to use building a trusting and open environment into its business strategy: Salesforce is also managed with a similar attitude. Marc Benioff, Salesforce CEO, stated at the Recode conference on work, that he advocates personally for the happiness and well being of Salesforce's employees, customers and friends-"looking out for everyone". He calls them the "Ohana" and points out that this is part of their business strategy: "We are shifting from the shareholder to the stakeholder... I advocate for all my stakeholders."

Both companies have successfully built a currency of trust with their employees and their consumers.

Some inescapable business trust facts:
-High trust companies have about 50% less turnover than their industry peers
-Workers who trust their colleagues are 31% more likely to love their jobs.
(WorkHuman Research Institute at Globoforce)

The environment that builds trust in this way can also be called connective or compassionate. What is compassion? According to Greater Good Science Center: The Science of a Meaningful Life, compassion is defined 'as the feeling that arises when you are confronted with another's suffering and feel motivated to relieve suffering'. Research has shown that we are indeed biologically wired for compassion. Studies confirm that when we feel compassion, our heart rate slows down, we secrete the hormone oxytocin, and regions of the brain linked to empathy, caregiving, and feelings of pleasure light up, which can result in our wanting to engage and care for other people. Which would bring us back to the currency of trust to foster engaging customer relations built on authentic connection and creating an atmosphere of innovation and momentum for employees. Another plus point: this is actually a truly healthy environment that could reduce any number of stress symptoms and stress based diseases.

Macro: On the macro level things are changing as well. The work paradigm in general has shifted. According to MBO Partners (MBO is itself more than 90% employee-owned and facilitates business for the self-employed): "in the last five years, the number of independent workers in the US has risen 12%". A fact that impacts all of us in one form or another. We travel by Lyft or Ueber, we stay in other people's houses with Airbnb, we order services through Thumbtack and so on. The numbers are still growing and this trend is strongly based on, again, digitalization. We communicate the products through platforms, platforms offer private services. Anyone can join and sell. Anyone can buy and anyone can voice their opinion on social media. Anyone will be listened to. 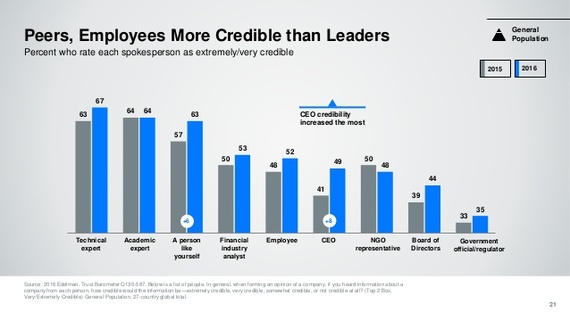 Building trust is imperative in this climate.
We can see a macro reflection of broken trust in today's politics. See the popular votes of Brexit in the UK and Trump in the United States that reflect a lack of trust in government and the existing system by the masses. It seems that trust in the political institutions has been rattled. The results are staggering and show that more than ever, for business, whether it is with employees or with customers, building and maintaining trust is key.
While the old model of influence revolves around concepts about Elites. Their privileged information access, the Elite's own interests as well as whether they are in turn connected to the masses. In the digital age everything has changed, research has shown that peer to peer influence is most powerful, the distrust in the general populace is growing and culminating in dissatisfaction and urgency. 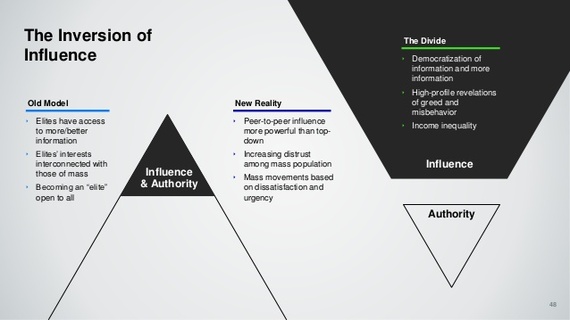 The democratization and digitalization of information is at the forefront of the news. In some cases it actually is the news or the source of the news. Changing trust models can change a whole entire economic, political and social environment. Doing business in this shifting milieu actually requires companies to build on trust.

Maybe this explains the success of Philz coffee, the avant-guarde strategy of Salesforce or the rise of Cisco under its past CEO, now Chairman, John Chambers. Monica Worline (Executive Director of the CompassionLab) in an interview with Nir Eyal (author of Hooked: How to Build Habit-Forming Products), speaks about great leaders who inspire trust: she points to John Chambers at Cisco Systems, saying that he was an interesting leader in technology because he actually believed that you could build a compassionate system. "He gave Cisco a mandate--anywhere in the world, if something difficult happened to an employee, he wanted to know about it within 48 hours. The organization became compassionate because people were much more aware of all the suffering that happens at work." Chambers earned the The Best Performing CEOs in the World award by the Harvard Business Review in October 2014 and the Edison Achievement Award 2016. Needless to say that Cisco had a very successful run under his leadership.

Company structure:
What are company structures that could help in building the Trust currency?
Rather than a "hierarchy" it is a kind of organization that Boston Consulting Group's Philip Evans has called a "hyperarchy," which he defined as a "large-scale, self-organizing community that sets free unusually high degrees of energy and engagement-despite the lack of a clear or direct economic payoff for participants." This is indeed a possibility for creating a competitive advantage in the digital age that is fluid and dynamic enough to adapt to the many changes, yet strong enough in its social and psychological tenants of Trust.

Don Peppers, futurist, authority on customer experience management issues agrees:
"If you take the right approach to self-organization, it will mean de-emphasizing monetary compensation, and concentrating more and more on the intrinsic motivators that are far more persuasive for most folks who no longer punch a clock. Not that money doesn't matter, but it is not nearly as important as most managers assume. And a self-organizing corporate culture will create value much more efficiently, with much less angst."

Fear:
And yes, Angst at work unnecessarily prevails- as a matter of fact it is a condition which bears its own name:
Ergophobia is the deep and persistent fear of work. The other names for this phobia are Ergasiophobia, or 'work aversion'. Ergophobia is recognized to be part of social anxiety disorder. Where distrust reigns according to Liz Ryan of Bloomberg Businessweek so does fear and therefore most probably Ergophobia, which then relates to higher absences from work, more stress and physical illness: "Would this be your knife in my back? When your employees have to stop and ask themselves, "Is it safe to tell Marybeth my idea?" you have a fear problem in your organization. Workplaces where people steal one another's intellectual capital are places where trust is subordinate to fear (if trust exists at all). If your business is one where backstabbers thrive, ditto. In a healthier shop, people would be comfortable rising up in protest against a backstabbing colleague, and the paradigm "I win when you lose" would be quickly nipped in the bud." 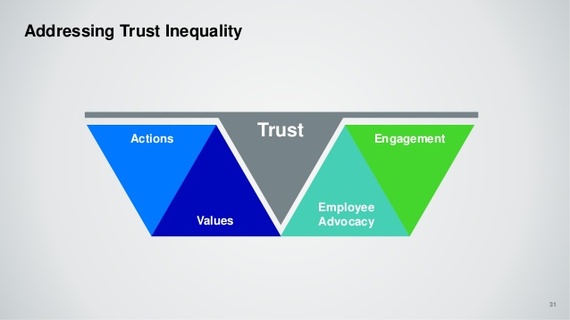 Creating a compassionate and safe atmosphere is where the competitive advantages lie. Whether on the micro or macro levels, leading in this type of environment requires acting in ways that provide clear reasons to decide to trust. There is no returning to the days when organizations expected--and received--unconditional loyalty from employees or from customers.
As Nan S Russell writer for Psychology today declares:
"The reality is that trust does come with risk, but not giving trust does, too. For those who want the dividends trust brings -- from greater profitability, collaboration, and customer service to higher engagement, productivity, dialogue, innovation, and sustainability, the workplaces, schools, and communities of the future applaud you, need you, and are waiting for you."

The CEO of TMobile, John Legere, understands and uses the Trust currency in the following ways: "First of all, I usually reach right out and engage with thousands of complaints, and if they come in big piles, then I shift over and go on Periscope or Facebook Live. Social media, it's fun and it's a game, but everything you need is sitting there, it's right there. The second thing is, I have a number I use to listen to both sides of customer-service calls. And all you need to hear is that people are calling in, and they're telling you exactly what they want to have." With employees: "When I go to retail stores, I jokingly tell the employees that everybody between me and them is the enemy. In effect, what I mean is that in my paramilitary hierarchy, if I can hear them and they can hear me, everything will be fine. All we need to do is make sure the entire company understands that it's their job to pass information between us. And so far so good."He has turned TMobile around with his customer and employee centric strategy into an expanding and successful company.

Make the engagement strong whether with employees or customers and build a strong base from which to expand further, grow in innovative ways and keep the stakeholders coming back for more.

Psychotherapist, teacher and content producer for VR. Finding solutions with heart in wellness and health, a creative who plays with innovation, an artist in dialogue