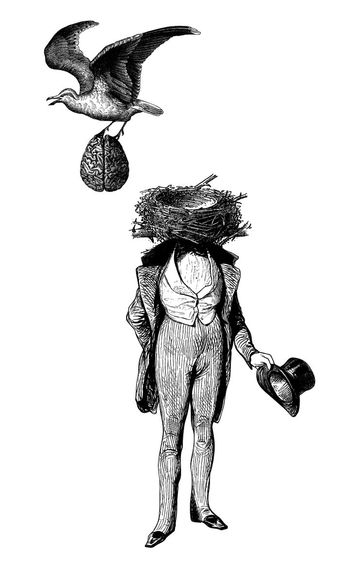 Because the human brain is usually covered with a skull and scalp and hair and sometimes even a hat, we don't know much about it. We know it looks like a cauliflower, but aside from that, it's mostly conjecture. For this reason, there have been many misconceptions about the brain. Popular Science has, just yesterday, exploded these myths. What follows are the myths, as well as the not-as-fun truth.

1. We use only 10 percent of our brains. This seemed to make perfect sense, since, by using such a small part of the brain's capacity, we would naturally arrive at the conclusion that our beliefs don't have to be impacted by science or logic, that the way to keep us safe from violence is to buy more guns, and that politicians should be bought and sold like pro sports figures.

But, lo and behold, it seems that we actually use every single part of our brains, although not at once. If we did, we would suddenly be bombarded with so much mental energy that our brains would implode, and some of the people running for the presidential nomination would start to make perfect sense.

2. Playing classical music to infants makes them smarter. If one needed any evidence to refute this claim, the state of Georgia began distributing classical ­music CDs to the families of newborns in 1998. These tykes are now 17-years-old and have been through the Georgia school system. If listening to classical music worked, Georgia schools should be shining beacons of learning.

Not so. A study in 2014, released by WalletHub, ranked the Georgia education system at #32 overall in the nation, #35 in school system quality alone and #13 in education output and safety. Georgia is #1 in high school dropout rate.

3. Adults can't grow new brain cells. This belief most likely stemmed from a look at old sci-fi films, in with space aliens had unusually large heads, due to unusually large brains. Their unusually large brains always directed them to land in a small town and to attempt to eat the people there, and it was up to the resident scientist and his plucky young daughter to save the day. For this reason, we decided that we wanted our own brains to stay the size they had always been.

The reality is that actual human brains do grow new neurons throughout life. But, rest assured that our brains don't actually keep getting bigger. Also, unless, you live in a small town that also has a scientist and his plucky daughter, you are safe.

4. Male brains are biologically better suited for math and science, female brains for empathy. This belief has been around forever, most likely since the first caveman said to his mate, "Would you please shut up about the poor dead mammoth? How about if, instead, you acknowledged that my superior observations of mammoth behavior led to me being able to stalk him and kill him?"

5. Being in a coma is like being asleep. You wake up intact and well-rested. This gets back to films and soap operas, where people are always dropping off into comas and waking up being perfectly fine, or books in which people see Jesus and god while in comas and wake up and start writing best sellers.

The reality is that being in a coma shuts down a lot of the brain, which is why waking up from a coma is usually not a happy thing. While loved ones are waving their arms and yelling, "He's back!," the object of the love is wondering who these people are and what's for lunch.

The good news is that you can stop engaging in crossword puzzle behavior. Your brain will not improve. You will simply get better at accumulating words that have no vowels and/or have never been uttered by an actual human being.

7. Students learn best when teaching styles match their learning styles. In this era of profound toleration and respect for sexual/religious/eating/mental and physical capacity/allergy differences, people assert that they need lessons delivered either visually or verbally, to conform to their own unique learning preferences. They also prefer instructors who have not consumed peanuts for at least six months prior to walking into the classroom, who have been on a gluten-free and soy-free diet, and who have never been vaccinated for anything.

The reality is somewhat different. It turns out that the teachers of yore, who simply spewed knowledge and didn't care about their students' individual differences or emotional well-being, were as effective as any teachers nowadays. Kids learned to read, to write, and to do math. Unlike today's students, they also knew who the President of the United States was and could name the states, the continents, the oceans, and could recite the Pledge of Allegiance.

8. Drinking alcohol kills brain cells. Debunking this one is good news for Life in the Boomer Lane's Now Husband. The truth is that the brain cells of non-drinkers and moderate drinkers is virtually the same. The brains of alcoholics have an issue. The brains of adolescent and college-age drinkers could not be assessed or understood by anyone.

9. ESP is a scientific certainty. ESP has never been shown scientifically to exist. Life in the Boomer lane knows what you are thinking: This statement is dead wrong. TV, movies, books, and The Long Island Medium have proven beyond the shadow of a doubt that ESP exists. LBL will not argue this one with you, especially since she is convinced that she, herself, has ESP, even if it is a stupid form of ESP that nobody would care about. But it is all hers.

10. Some people are left-brained (logical) and right-brained (creative). Not so. While the brain's left hemisphere better processes verbal information and the right hemisphere, visual and spatial, there is no such thing as dominance. Creative thinking activates a widespread neural network without favoring either side of the brain. Most members of Congress can attest to creative thinking that utilizes not only their entire brains, but the contents of their noses and other body parts as well.

The Truth About Your Brain
Foods For Brain Health