Statistically, 70 percent of adolescent girls don't like the way they look. Thirty percent of them have an eating disorder because of it. Translated into real life, that means that seven out of every 10 young girls that you know can't smile when they look in the mirror -- instead they frown at their own image and think of how to improve it. Out of those, another two will sit down at the family dinner table later that night and see it as a miserable challenge of what not to eat or what to purge once they do, instead of experiencing it as a warm time of family conversations, giggles and bonding. 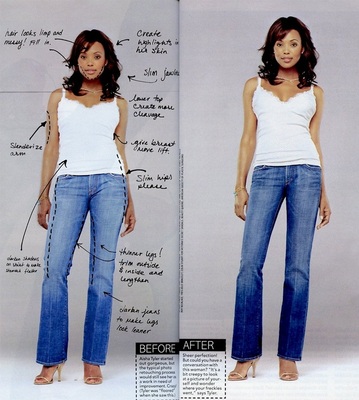 A petition was launched last week to press the Federal Trade Commission (FTC) to enforce the laws that are already on the books for Truth in Advertising. The objective of these laws is to make sure that the glossy glamorous pictures we as consumers are constantly subjected to without choosing to see them, actually reflect a reality rather than just false claims. These laws apply to everything from cereal ads that make a bowl of soggy cereal look milky good, to soap ads that promise to take average dry skin and turn it soft as a baby's bottom. Obviously, if ads didn't exaggerate the goodness of everything, they probably couldn't sell the product they are being paid to sell. But there is a limit, we as a society have decided, to deceptiveness -- and we codified it here in the U.S. in Truth in Advertising laws.

Fast forward a generation, and we are seeing a resurgence of the sexualized female as the means to sell everything from dish soap to travel, gum to granola bars, and not surprisingly, lipstick and fashion. The problem is that in an era where kids can starve to death around the world while hyped-up celebrities like the Kardashian sisters can be millionaires for no reason at all -- with seemingly no skills or jobs to speak of -- the overarching message to our children is that nothing else matters but the way you look. Not much conversation is present in mass media about the great ideas or high achievements of millions of women around the world who look like regular people and spend more time on what they are doing than how they are looking. I fault the media for this. Just last week a diva-esque young lady rammed into a cyclist on the side of the road while she was texting and driving. The cyclist suffered multiple fractures and will spend months in a hospital to heal his vertebrae. But when the young lady was quizzed, she balked that she really "didn't care" what had happened to the cyclist and was rather peeved that there was now a dent in her car. The young girl posted a selfie on her Twitter feed about her dismay at being embroiled in the brouhaha over injuring someone's vertebrae -- and the selfie revealed a Kardash-esque young girl posing with puckered lips and cleavage to boot. Reader comments revealed a peeved public wondering what kind of girl could text while driving, injure a cyclist as a result, and not be able to stop and recognize that she had been in the wrong. But I have to wonder, why we are surprised? In a society that seems to go along with the "look-good-at-all-costs" mindset and buys into the now popular proposition that it's ok to be dumb but pretty, how can we be surprised that this young girl thought it was more important to look glam after an accident than to be thoughtful? I am aghast, but not surprised.

It has become fashionable, I dare say, to mindlessly chase the perfect image the media would have us believe is attainable. The consequences are becoming dire. The Truth In Ads petition attempts to take a swipe at this culture. It implores the FTC to stand up and notice that advertising as related to the picture perfect presentation of a sexualized female figure has gone too far. It now threatens to unhinge our collective understanding of what it is to be a forward-thinking society, and even more essentially, what it means to be female in that society.

The photoshoping phenomenon has transcended digital beautification of pictures to a new realm of abstract art. The original images advertisers begin with, of very real people, end up being an unattainably perfect rendition of the human female form that no one can achieve. I don't mean that no one can be pretty, or have flawless skin, or a nice body, or good abs, or straight teeth, or nice boobs, or long legs or flowy hair. I mean that no human has all of them, without a blemish. Those images are made, on a screen, with the use of software directed at making an image so perfect that you the consumer will spend your money to attain it. That is the essence of false advertising -- and we as a nation are choosing to overlook it at the cost of our youth and their self worth.

My daughter and I altered to perfection by Sam Anvari at Adroit Business Growth Solutions, LLC.

The Truth In Ads petition (#TruthInAds) is gaining signatures fast, with nearly 10,000 signatures in less than a week from people across this country who have had enough deception. They have recognized that as entertaining as mindless beauty is, it isn't going to do us any good to have an entire generation lose sight of what's really important and chase an unattainable image of perfection. As a mom, a woman, and a human being with a mind, I am for Truth In Ads. I hope you are too.