During the past few weeks, retired NSA official Ed Loomis, author of the book: NSA's Transformation: An Executive Black Eye, worked as the principal drafter of the following memo from our "Veteran Intelligence Professionals for Sanity (VIPS)" laying out the current sorry situation in the U.S. and providing recommendations for the Privacy and Civil Liberties Oversight Board:

MEMORANDUM FOR: Privacy and Civil Liberties Oversight Board
FROM: Veteran Intelligence Professionals for Sanity (VIPS)
Subject: Two Administrations and Congress Dismantled the Constitution - How Can It Be Restored?

Since the events of September 11, 2001, actions by successive U.S. administrations - backed by legislation such as the Patriot Act and the FISA Amendments Act (FAA) - have eroded privacy provisions guaranteed under the U.S. Constitution. (Full memo here.)

When a powerful government like "Top Secret America" enjoys maximum "privacy" while private individuals are subjected to full transparency, it might be time to turn that boat around! To put it lightly, the situation is topsy turvy. In fact many members of our related group: "Sam Adams Associates for Integrity in Intelligence" were dumbstruck by how similar the "collect it all" mantras were/are of the East German Stasi and the U.S. (with its "Five Eyes"). Our recent tour of the Stasi Museum in East Berlin just hit too close to home:

The museum that now occupies the building is an oddly mundane reminder of another era: Indistinguishable rooms of desks, phones and filing cabinets, fenced by aging net curtains filtering the sunlight. It is the walls adorned with surveillance photos of supposed state enemies, and exhibits of household gadgets planted with audio recording devices, that color the office's banality with a shade of darkness.

But the specter of Big Brother lingers, as I'm reminded by the man who is accompanying me through the exhibits: William Binney, the former NSA technical director who helped design mass surveillance systems for the agency, before spending a decade warning the world about the risks of those systems. As we tread past identical desks, retro rotary dial phones, and electromechanical typewriters, the Stasi's quaint spying technology reminds him of his NSA office in the 1980s, he says. Except the NSA today is estimated to hold one billion times more data than the Stasi held.

"The NSA's agenda is to control the government, and control the population," Binney says. (Full article here and also see "Examining the Stasi, Seeing the NSA") 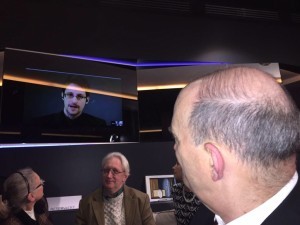 As the shaken but finally enlightened Ebenezer Scrooge once asked before he was shown his sad future: "Tell me! Are these the shadows of things that must be, or...?" Of course, we live in a kind of Dickens novel ourselves, unable to predict the twists and turns of the plot as it thickens, almost never seeing how we reap what we sow (or "blowback" as the CIA calls it). So it's impossible to know how our story ends. It does seem way past time, however, to try to awaken from this post 9-11 nightmare and start standing up for truth, governmental transparency, democracy and the rule of law as well as curbing the surveillance state. Join this worldwide initiative here.

People in many countries will create Stand Up For Truth activities during the week of June 1-7, 2015 -- to move toward a culture of openness and truth as well as security for those who take the risk of disclosing information that authorities want to keep hidden.

Democracy is based on informed consent of the governed. This is not possible when crucial (and sometimes illegal) government policies remain hidden from the public. Whistleblowing is essential for bringing such policies into the light: exposing key information related to human rights violations, corporate malfeasance, the environment, civil liberties and war.

We must stand up for a free press, individual privacy, governmental and corporate transparency, due process and rule of law as we seek to reveal official information that the public has a right to know. Persecution of whistleblowers and journalists is illegitimate and should be opposed as such.

While undemocratic authority thrives on secrecy, we should bring whistleblowing to the forefront of public consciousness -- in a process that widely encourages the release of documentation of governmental and corporate actions that cannot withstand the light of day.

Please initiate Stand Up For Truth activities where you live.