A blogger and activist who reported that on a "secret religious right Facebook group" which he says was planning to promote and disseminate antigay information, has revealed the names of some of the prominent leaders in the group. Alvin McEwen of the website Holy Bullies and Headless Monsters reported that he was tipped off by a member of the group who had reservations about the group’s tactics. Shortly after he wrote about the secret Facebook group, named "Truth4Time," he reported that the group disbanded.

In his initial report, McEwen would only say that the group included a “member of a state legislature,” a "Fox News pundit," and various other unnamed prominent individuals. Appearing on my radio show on SiriusXM, however, McEwen revealed many of the members by name, and later provided Facebook screenshots showing the members in the group.

The members he named include: the National Organization for Marriage co-founder, Maggie Gallagher, and the group’s president Brian Brown; Scott Lively, author of the Pink Swastika, who is being sued for his alleged involvement in fostering Uganda’s notorious "Kill the Gays" bill:, Phyllis Schlafly of the Eagle Forum; Peter LaBarbera of Americans for Truth; Oklahoma state representative Sally Kern, who’d created headlines when said gays were “worse than terrorism;” Christian rocker Bradlee Dean, who has been at the center of a firestorm over allegations he called for the execution of gays; Brian Camenker of the Massachusetts group Mass Resistance; Matt Barber of the conservative legal group Liberty Counsel; and several others. The screenshots from Facebook of the group that McEwen provided also included Dr. Keith Ablow, a Fox News pundit and psychiatrist who warned parents against allowing their children to watch "Dancing with the Stars" because of the participation of Chaz Bono, a transgender man, who he termed a "very disordered person."

McEwen said that tactics the group planned to employ included “ganging up” on
“pro-gay pages with comments and flagging Facebook pro-gay pages multiple times with the intent on getting these pages removed.” He said that his informant, a member of the group, gave him the information after becoming uncomfortable with some of the group’s plans, and was “especially disturbed by a plan, whether it will come to fruition or not, to bombard physicians and school boards with negative and distorted information about the gay community.”

Listen to the interview below:

Take a look at a screengrab featuring some of the members of the now-defunct group below: 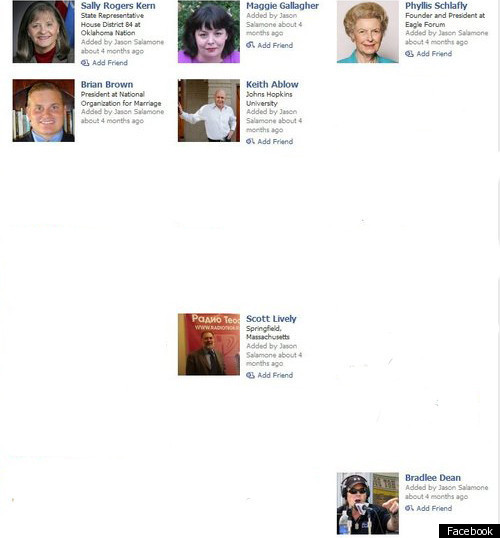 Update: Michael Brown, one of the administrators of the Truth4Time Facebook page, and host of the Line of Fire radio show, sent the following response to this story:

As one of the administrators on the Truth4Time Facebook page, I wanted to correct a number of errors in this article. Michelangelo Signorile based his report on information given to him by gay blogger Alvin
McEwen, which included the following:

1) “Shortly after he wrote about the secret Facebook group, named "Truth4Time," he reported that
the group disbanded.” That is completely false. The group did not disband, nor was that a subject of
consideration for the group.

2) It is stated that “the group included a ‘member of a state legislature,’ a ‘Fox News pundit,’ and various
other unnamed prominent individuals,” which were then named, including Maggie Gallagher of the
National Organization of Marriage and Dr. Keith Ablow of Fox News. This is actually quite misleading,
since access to the site was given to people like Maggie and Keith, but to my knowledge they were never
active on the site and might not even know of its existence.

3) According to Signorile, “McEwen said that tactics the group planned to employ included ‘ganging
up’ on ‘pro-gay pages with comments and flagging Facebook pro-gay pages multiple times with the
intent on getting these pages removed.’” This is patently false, from beginning to end. The group was
actually formed with the intent of doing the exact opposite of this. Some of our conservative colleagues
documented for us attempts by some gay activists to have their Facebook pages removed by constantly
reporting them to Facebook as containing “hate speech” or “hateful” content. One of the goals of our
group was to be alerted to tactics like this so we could report this to Facebook in the interest of fairness
and so as to combat cyber-bullying.

4) Lastly, McEwen claimed that one former member of the group (who somehow was approved for
acceptance) was “especially disturbed by a plan, whether it will come to fruition or not, to bombard
physicians and school boards with negative and distorted information about the gay community.” This again is as misleading as it is untrue. There was no such plan, but there was always encouragement to
raise the issue of the health risks of homosexual activity, as reported by the Centers for Disease Control
and the like, whenever relevant in different discussions and blogs.