Overdid it on the holiday cheer? You're not alone.

For as long as I can remember, I'd get myself into a hole by this time each year. And as much as I tried to convince myself that I enjoyed the challenge of digging out come January 1, it only ended up being discouraging and exhausting.

If that vicious cycle sounds all too familiar, you're in good company. According to a University of Scranton study, less than 20 percent of people who make resolutions are successful in actually keeping them. You can't argue with those statistics; it's clear that most of us have fallen into a rut and the annual way of resolving to get out of it isn't working. 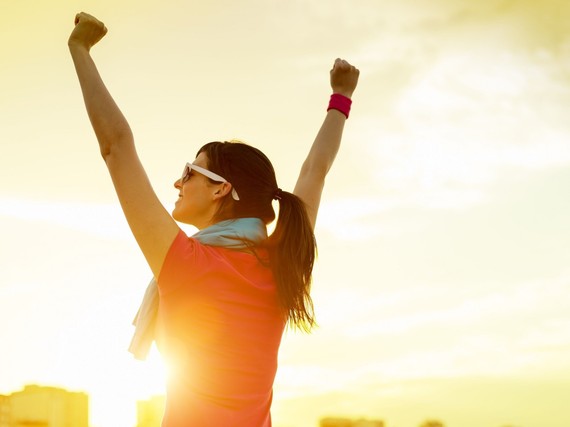 So after a lot of experimenting, I stumbled upon something that actually works: making goals based on motivation rather than deprivation. I ditch the negative mindset of having to lose, torture or deny and go into the year on a positive note with goals that have to do with enhancing, embracing and adding throughout the next 12 months.

Here are a few of my favorite "out with the old, in with the new" approaches to some of the most common fitness resolutions for 2015.

Stop focusing on the scale and start thinking more holistically when it comes to your body composition. Losing weight for the sake of dropping pounds is counter-productive, especially when it's water lost via crash diet or muscle lost via hours of cardio. You may look smaller, but you'll still feel sluggish and weak.

Instead, turn yourself into a fat-burning machine by creating a workout regimen than includes strength training. Not only is it fun to watch yourself get progressively stronger over time, but building muscle mass, the body's primary metabolic driver, will also lean you out in the long run.

Close your eyes. Whatever you do, don't think about an Oreo.

There's a good chance you can't think of anything else now, right? Well, that's the same way your brain works on a diet -- the more you try to concentrate on not eating certain things, the more you become fixated on them, which can be maddening, to say the least.

So stop with the sweeping changes; less is more when it comes to revamping eating habits. Instead of ruling out whole categories of foods, target your trouble spots -- processed foods and sugar, for example -- and focus on just making small, incremental changes, such as substituting almond meal for white flour or trading your usual dessert for a nice piece of seasonal fruit.

Vowing to hit the gym every day may seem like a logical solution when you're looking to get into better shape, but why sentence yourself to hours upon hours of boredom if it's just not your thing?

Think back to when you were younger. Is there an activity you loved or a skill you always wanted to learn? Whether it's flag football or ballet, rollerblading or rock climbing, it's never too late to rekindle an old hobby or pick up a new one that will stimulate both your mind and your body.

Be careful of goals that aren't S.M.A.R.T. (Specific, Measurable, Attainable, Realistic and Timely). Sure, "getting fit" is a priority for most of us for 2015, but does it mean walking a mile every day, lowering your blood pressure or running a marathon?

Set yourself up for success by scrapping those vague resolutions in favor of concrete goals with timeframes, such as hitting a health metric, completing an athletic event or setting a new personal record for distance or time within the next few months. Keep the main goal ambitious enough, but within reach, and set smaller milestones in order to stay motivated and be able to course correct along the way.

Again, this one is another one of those slippery-slope resolutions where, if you're like me, you start strong but after a few concessions ("just this once..."), you usually end up right back where you started -- if not further behind. What begins in earnest as a way to improve nutritional intake devolves into a game of justifying as much junk as humanly possible.

Instead, empower yourself with a plan for the next 12 months. Start by taking stock of your habits, although you probably have a pretty good idea where your weaknesses lie. Next, break up the year by month and commit to a specific change of behavior for each one, whether it's avoiding the drive-thru on the way home from work, ceasing mindless eating in front of the TV or cooking with whole foods rather than the processed stuff. Keep track via a calendar, and reward yourself (and your family) for a job well done.

Once the clock strikes midnight on December 31, the real countdown begins: We've got 365 days to make small changes that lead to big results, so now's the time to make a game plan that will stack the resolution odds in your favor!