The Big Bad Wolf or the Boogieman was called something else in my childhood: The Urban Reform. Raised in a house for which my parents had no papers, when there was a knock on the door it scared us to death because it might be the housing inspector. I learned to look through the blinds before opening, a practice I keep to this day, to avoid those with portfolios who snooped around and warned us of the legal fragility of our home. The institution they represented was more feared in my tenement than the police themselves. Numerous confiscations, stamps stuck on the doors, evictions and fines made even the tough guys of Central Havana tremble when they heard someone talking about the Housing Institute. 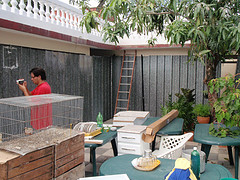 Now the ghost of my childhood has returned, with what happened to the patio of my friend Karina Galvez. An economist and university professor, this pleasant woman from Pinar del Rio, was part of the editorial board of the magazine Vitral, and now is an essential pillar of the portal Convivencia (Coexistence). This, in a society where censorship and opportunism are growing everywhere, like the marabu weed, could be interpreted as a great mistake on the part of Karina. To make matters worse, she has always believed that her parents' house, where she was born and has lived for more than forty years, was a family property, as it says in the title deed stored in the second drawer of her dresser. On the basis that building one's own patio should be something as personal as the decision to let one's nails grow, she built a covered patio that her friends all contributed to. Gradually it became a place for discussion, an epicenter of reflection, and a place of essential pilgrimage for the artists and free thinkers of Pinar del Rio.

Until Bishop Emeritus Ciro Gonzalez came to bless the Virgin of Charity that presided over this cozy space. I remember that Reinaldo and I are looking for a ceramic artist who recorded the Cuban flag and shield for the improvised altar in the now famous "Patio of Karina." Then the legal skirmishes began, the Urban Reform inspectors with their threats of forced destruction and expropriation. It seemed that it would all end with a monetary penalty or, in the worst case, in tearing down what had been built. But for those who don't know how to build, it gives them a special pleasure to confiscate, to remove the achievements of others, seizing what they themselves have not created. And so it was yesterday, Tuesday, that a brigade came to the house of my friend and announced that the patio was not hers, but rather the property of the State enterprise CIMEX which abuts the house. At a speed rarely seen in these parts, they raised a metal barrier which that night was converted into a brick wall.

Karina, in her infinite capacity to laugh at everything, said that she will paint a pair of roosters on the ugly wall, announcing the dawn. On the other side, the land that has always been hers is now used by others. One day she will get it back, I know, but not the Urban Reform, nor the political police, nor the rapid response brigade stationed outside will keep us from continuing to say and feel that this is Karina's Patio.