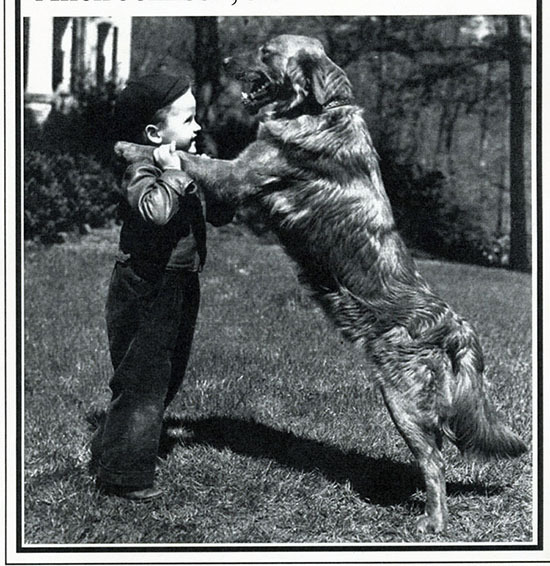 Allen Johnson and his dog Co-Co in the early 1940's

Allen Johnson Jr., 79, has lived a life filled with adventure, travel and success, but he insists, "My life peaked at nine." He has written a memoir and books of poems and essays, often reflecting on the unfettered joy of growing up under the "benign neglect" of his parents and the loving guidance of black employees in his parents' large Alabama home surrounded by forest in Mountain Brook, an affluent suburb of Birmingham.

Johnson attended three universities, sailed to Europe in the mid-1950s on the Ile de France when he met Ernest Hemingway on board. He has lived in a variety of places including Switzerland, Cuba, Florida and Vermont, where in 1971 he founded the Vermont State Craft Center. He plays jazz guitar. He met and wrote about Albert Einstein and Nat King Cole and he served in the army in '59 and '60. But he insists the best time of his life was his boyhood in the South.

His memoir "Fun! A Boyhood", was written and published over 20 years ago, primarily

"so that my descendants would be able to know what I was like as a boy. I also wanted to memorialize what was an extraordinarily joyful time in my life along with some of the people -- and dogs -- who gave me so much love and fun."

In "Fun" Allen remembers the particular pleasures of a boyhood in the 1930s and 1940s -- handmade slingshots, comic books, pocket knives , war-time Spam and margarine instead of butter, his Dick Tracy cap gun and the little comic strips that were wrapped around Double Bubble gum, radio shows like "Terry and the Pirates", hoecake dripping with melted butter, BB guns and firecrackers, water pistols, yoyos, chemistry sets--most of which would never be permitted by careful parents today.

"I found the seventy-three year-old me in complete accord with the fifty-two year-old me on the subject of the negativism in the modern world. I continue to want to do my small part to turn this trend around. It is essential that we start to pay more attention to the source of the joyful, fun things in life."

So he drew on his childhood memories for three books, known collectively as the Blackwater novels, and turned to his long-time friend George Schnitzer of Premium Press America, an independent publisher, to publish them. The books, which are reminiscent of Mark Twains' works about boyhood a century earlier, are targeted at forth and fifth graders but appeal just as much to adults and especially grandparents who want to share their childhood adventures with their grandchildren. (Many of Johnson's own adventures, bad and good, including blowing up the toilet with a cherry bomb, appear in the books.) They have won a number of awards including the INDIEFAB Book of the Year Award, and the IPPY 2015 Bronze Medal for Best Juvenile Fiction.

In the first novel, "My Brother's Story", identical twins Johnny and Will are orphaned and adopted by two families, Johnny by an abusive aunt in Tennessee and Will by a loving couple who live in the country near Birmingham. Johnny runs away and is sheltered deep in the Blackwater Swamp by Linc, a reclusive black man who is persecuted by Bobby Scagg, the son of the man who lynched Linc's father. In turn, Johnny is able to care for Linc when he becomes ill with malaria. "My Brother's Story" is a record of the twins' adventures as they search to find each other and then to win the right to live together.

The second novel, "The Dead House," continues the tale of the twins, and draws on author Johnson's love of tree houses, riding on Pullman trains, dogs, and mysterious mansions. The third, "A Nest of Snakes" begins with the twins, up in their tree house, overhearing a plot. With their friend Rad Fox they decide to help Linc, who is in danger from the Ku Klux Klan. One reviewer, Morris Dees, of the Southern Poverty Law Center said, "Their story has an important childhood lesson at its heart: How good men and women, black and white, would stand up to violent, scheming racists in the era of Jim Crow."

Race relations and the inequities of the past play a part in each of the Blackwater novels. As Johnson told me,

"The point I try to make in these books is that a lot of love existed between the races, and in my entire boyhood I never saw one interaction that wasn't based on love and respect. When I was growing up, a lot of us were exposed to a black person who worked for the family. I learned about honesty from our cook, Nettie. They became part of the family and helped to raise us."

But as an adult, Johnson realized the poisonous injustices rampant in the South.

"As a child I didn't understand. But my college years at the University of Alabama also gave me first-hand experience of the good people coming together with love to help each other and to confront racial hatred. I was in the audience when Nat King Cole was attacked."

(In 1956 the entertainer was assaulted on stage during a concert in Birmingham, Alabama.)

Beyond describing interactions between the races in the 1930's and 40's, the novels are a celebration of the joys of an unfettered, unscheduled boyhood.

"My hope is that grandparents will read the novels to their grandkids for fun and to help them understand how life was back in their day."

He laments that such an unregulated and independent childhood is not necessarily possible today.

"The country is much more urban than when I was a child. Roaming free in the woods is not possible for many kids. Rough and ready fun, contact with nature, has been lost. Also, the media have got parents so scared that they won't let kids go off on their own. Modern kids are over-structured and hooked on technology and there may not be much we can do about it."

But Johnson, who has three adult children but no grandchildren (yet), is hoping that he can help today's kids rediscover the possibilities of childhood.

"I consider these books to be parables on how to live. They come from an earlier time when young people played outside as I did as a boy in Alabama. Fun was my goal and the possibility of getting into trouble added spice. When I went out the door in the morning, I knew I was going to have fun. The only question was how much fun."

Trying To Put The Fun Back In Boyhood
What Do You Miss About Your Children Now That They're Adults?