Everyone is complaining about the heat here, even the stalwarts who were born to it. Disgorged from mind numbing twenty-some odd hour flights, my son and I arrived to find the chocolates we had brought as Christmas presents liquefied into something the consistency of a post-rain mud flow. Vitamin capsules succumbed to the heat in Ziploc bags; lipstick lost its former identity as we moved to the tune of Christmas carols, bright lights and election streamers that dot the streets of this country just a heartbeat north of the equator. We are back in Sri Lanka. It's Christmas in Colombo! 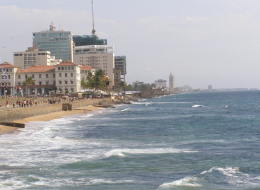 My son Noah and I have come back to this island that was our home for a year after 9/11. Noah has not been back since 2002. I returned for eight months after the tsunami to work on my book about the island "Not Quite Paradise" (Beacon Press, 2009). I thought I had finished the book in 2004, but then the wave hit. And everything changed. The book will be out in a few days. We both decided we needed to return, to put our feet on the island again, to take stock of a place that had so deeply defined our lives for that year and longer. In just days it will be five years since the tsunami. It feels to us as if it should be marked in some way, but so far there has been nothing in the press about it. Friends tell me that the country is too busy with other things, the upcoming presidential election in January for one. The kickoff to the campaign began the day after we arrived. For many this is going to be a bitterly fought contest between the incumbent president, Mahinda Rajapaksa, and General Sarath Fonseka both of whom claim responsibility for the victory in May of this year over the Tamil Tigers. Some say this election is going to determine the future of this country. Others fear that the direction has already been charted and that nothing is going to change regardless of who is running the place. But this is what is garnering the attention these days as Noah and I thread our way through the traffic of Christmas shoppers and campaign throngs in downtown Colombo.

We have a plan. The two of us want to retrace our steps during the next several weeks. We'll first head east to Pottuvil and Arugam Bay, the area that took a direct hit on December 26, 2004. From there we'll head south along Sri Lanka's southern beaches where I traveled after the tsunami, into places where the camps and temporary housing had been set up five years ago. Then we'll take the train back up into the hills of Kandy to the place that was once home and then north to Jaffna, one of the epicenters of the war against the Tamil Tigers. 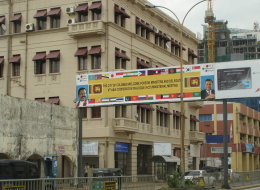 But it is Saturday today, and we are lollygagging our way around Colombo, fighting off the all too apparent effects of jet lag. We eat curry with friends and walk down to the esplanade along the Indian Ocean. We buy mangoes dipped in salt and spiced with chili pepper and watch the families with their kids on Galle Face Green. For the first time we see women in long black burkas, something I had never seen before here. We try to walk down the steps to the spit of sand that serves as a kind of beach, but the steps have been taken away. From the esplanade we can easily jump the six feet down to the sand, but we don't. Young soldiers with rifles stand feet away, a reminder that unrest still tugs at this country even after military victory.

I feel like we are slip sliding our way through this country. The right kind of travel needs to be deep and long. We have three weeks, and it is South Asia where life travels to its own rhythms. Are we crazy to be doing this?

We'll pack today. We'll roll our questions in with our towels as we set out to see how a tiny island the size of a charm tries to put the pieces back together after thirty years of war and several giant waves.