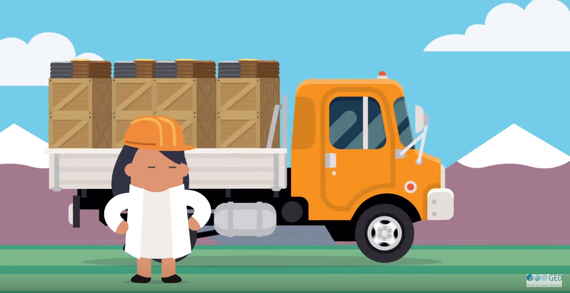 For centuries, Latin America's economies have revolved around exporting commodities - be it digging up minerals and hydrocarbons, planting soya or coffee, or taking advantage of what animals leave behind, the region has historically relied on shipping natural resources overseas.

Depending on the era, this could certainly be a lucrative endeavor, but commodity prices are notoriously fickle, and a focus on natural resources stunted the region's efforts to build the manufacturing supply chains that have been instrumental in East Asia's rapid industrialization. In the post-World War II era, many Latin American countries attempted to address this commodity reliance by implementing import-substitution industrialization policies. In practice, this meant high tariffs to discourage imports, thus protecting domestic industry.

But without international competition, Latin American products often turned out over-priced and underwhelming. And when the region did try to liberalize in the 1990s, it did not work out so well.

As the 20th century gave way to the 21st, a number of Latin American countries returned to commodities, including agricultural products produced using increasingly sophisticated technologies. And they also went back to protectionist measures such as local content requirements aimed at supporting a domestic manufacturing sector struggling with currency appreciation.

This was a fine strategy while Chinese demand for raw materials pushed prices through the roof. But those prices have fallen in recent years, and the region faces a familiar challenge: How to move beyond commodity exports and towards successful integration into international trade networks.

TTIP & TPP - A Threat to Latin America? - An Animated Video

As timing would have it, just as Latin American countries such as The Pacific Pumas (Chile, Colombia, Mexico and Peru) seek deeper integration into global trade, the world debates a series of mega trade deals.

How these deals will affect the region is a subject of a new Bertelsmann Foundation study, A Chain Reaction? Effects of Mega-Trade Deals on Latin America. So what did it find?

Let's start with the Trans-Pacific Partnership - TPP - an agreement between mostly Asian and American countries--including Mexico, Chile, and Peru. According to the modeling Bertelsmann did with the Ifo Institute, Peru could be a big winner here. Their model suggests TPP could lead to a 2.4 percent increase in real income. Specifically, they see a 45 percent value-added boost to the metal sector. These results stem from the theory that once tariffs are lowered, Peruvian producers are more likely to refine commodities domestically and to export more valuable intermediate goods. In other words, instead of just digging it up and shipping it abroad, more steps towards a final product would be conducted in Peru.

For Chile and Mexico, however, TPP may not be such a big deal. Both countries already have deep trade agreements with major TPP partners, so our model suggests a new agreement might only have a marginal impact.

The Trans-Atlantic Trade and Investment Partnership--TTIP--the proposed trade agreement between the US and EU, could pose more of a threat to Latin America. Many Latin American countries trade extensively with the US. If the US and EU come to an agreement, Latin America could lose its insider-access to US markets.

For example, Mexico, which has traded freely with the US since the implementation of NAFTA in 1994, conducts nearly 80 percent of its trade with Uncle Sam. Mexico would still retain certain advantages, such as proximity and cost of labor, but increased US trade with the EU could syphon-off a degree of trade. If the EU gets NAFTA-like access, Mexican exports to the US could fall by over five percent. What about the countries that are not involved at all?

For example, Mercosur countries on the region's Atlantic coast are not participants in TPP, TTIP, or any of the other mega-deals we analyzed.

The biggest of these countries, Brazil, is not a member in any of the mega-deals, and maintains relatively high tariffs. The model used in the report suggests that in terms of growth, the mega-deals will not have a major effect either way.

But they will effect Brazil's export portfolio. With less relative access to markets participating in the mega-deals (such as the US, EU and Japan), Brazil could increasingly rely on trade with China--another outlying country--and one which does not need Brazil's manufacturing goods. In our model, Brazil's manufacturing sector would shrink in all scenarios, threatening to leave to country back where it started: digging things out of the earth and sending them abroad. (For more on the pacts' effects on Brazil, be sure to see Otaviano Canuto's "Are Mega-Trade Agreements a Threat to Brazil?".) Dealing with Mega-Deals: Opportunities and Challenges

But all is not lost. The regional mega-deals currently under negotiation do provide an opportunity for countries to enhance their integration in global value chains. This is particularly relevant in Latin America, where cross-border connections have been largely absent due to the long shadow of import-substitution industrialization policies.

In many cases, remaining outside of transnational value chains resulted in loss of competitiveness of domestic industries, which lack access to low-cost inputs and the latest technology - see Canuto (2015) on the Brazilian case. Too often the response has been to increase trade barriers, further separating the domestic market from global integration. Consequently, the cost of being left out increases.

The new mega-deals come at a time when Latin American countries, especially the large economies, which have avoided integration, are in crisis. Now could be an opportunity to re-align with global trade.

For better or worse, TPP and TTIP could redefine global trade in the 21st century. At the moment, a Latin America perspective is largely lacking in the negotiation process; in TTIP, it is excluded by definition. But Latin American countries can move unilaterally to ensure that tariffs and regulations match what could become the new global standard.

Of course, alternatively, they could rebuild protective economic walls. But if they do, later on down the road, they just might have to pay for it.

Otaviano Canuto is an Executive Director at the International Monetary Fund. All opinions expressed here are his own and do not represent those of the IMF or of those governments he represents at the IMF Board

Samuel George is the Latin America Project Manager for the Bertelsmann Foundation and host of The Crossroads video series. Cornelius Fleischhaker is a PhD candidate at the Johns Hopkins School of Advanced International Studies. He is co-author of Five Steps to Kickstart Brazil

See Also: Not Your Grandma's Cuba Argentina at the Crossroads A New Day in Colombia

NOTE: The video in this text are a project of Samuel George and the Bertelsmann Foundation and do not necessarily reflect the views of co-authors Otaviano Canuto, Cornelius Fleischhaker, or their institutions.