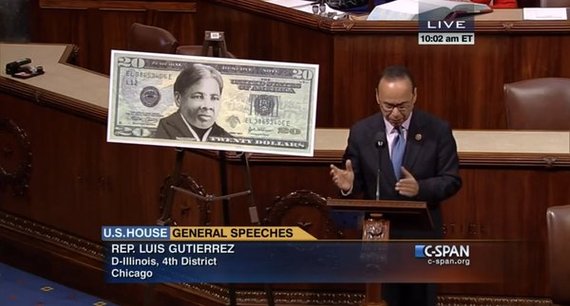 A year ago, I introduced the "Put a Woman on the Twenty Act of 2015" (H.R. 1910) to urge the Secretary of the Treasury to put a woman's portrait on American money. The bill didn't pass, but it didn't have to. After first announcing in 2015 that the ten dollar bill would be changed to include a woman or women, Secretary Jack Lew announced yesterday that Alexander Hamilton would remain on the $10 note, but abolitionist leader Harriet Tubman would grace the $20 note when it is redesigned.

Also about a year ago, I gave a speech in Congress about why I though Harriet Tubman would be an excellent choice to replace President Andrew Jackson on the $20 bill. She had just won an on-line poll in which 600,000 people had cast votes as part of the "Women on 20s" campaign. What follows is adapted from my speech in Congress on May 20, 2015:

I am not saying that President Andrew Jackson or any of the men we honor on our money are not worthy. Many of our founding fathers made important contributions to this country which we continue to enjoy today in the United States and throughout the world by the spread of democracy. It is also true that part of our history includes practices and decisions that we certainly are not proud of.

Let's be straight, President Jackson was a war hero, a great defender of the young American Republic, and the first President and Founder of the Democratic Party. He oversaw our great nation as it came together and expanded west.

But it is the expansion of this nation, the manifest destiny that pushed settlers west, that pushed the institution of slavery west, and that pushed the extermination and forced migration of Native peoples west -- that is precisely the nexus of Andrew Jackson and Harriett Tubman and illustrates why putting a new face on our money makes sense.

The forced removal of Native peoples from their land so that we could expand slavery is at the heart of Andrew Jackson's legacy. It is the land-grab and the trail of tears that is key to contextualizing President Jackson and his era.

It was when Harriett Tubman was about six years old that Jackson became President. She was born a slave in Maryland and eventually walked to freedom in Pennsylvania.

But she went back. Again and again. At least 19 times, showing more than 300 black people how to follow the Big Dipper and the North Star to freedom in the North -- as a conductor on the Underground Railroad.

She was an agitator. She was a subversive. She used the tools of social change to improve America. She fought for the little guy against the strong guy. And she was willing to put herself at great risk to ensure justice for others.

In other words, she was an ideal American!