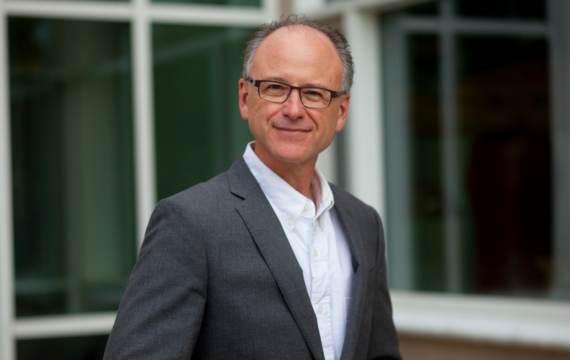 I've known and admired Professor Sydney Finkelstein since I met him in 2009, read his #1 bestselling book, Why Smart Executives Fail, and sat in one of his executive education classes. He is the Steven Roth Professor of Management and Director of the Center for Leadership at the Tuck School of Business (ranked top 10 by Business Insider) at Dartmouth College, where he teaches courses on leadership and strategy. Professor Finkelstein has published 20 books and 80 articles.

Most recently, Professor Finkelstein has written SUPERBOSSES: How Exceptional Leaders Master the Flow of Talent. He conducted ten years of extensive research of 18 innovative business leaders with tremendous track records in developing the best talent in their industries, who in turn helped them become the legendary successes they are today. The extraordinary roster of stars include Larry Ellison, Lorne Michaels, Ralph Lauren, Tommy Frist, Bill Walsh and a dozen others. Superbosses illuminates the methods these exceptional leaders used, and how organizations should be cultivating talent.

I interviewed Professor Finkelstein about Superbosses.

What are the three most important traits of a Superboss?

1) They create master-apprentice relationships: Superbosses customize their coaching to what each protégé really needs. They work hand-in-hand with their team members, creating opportunities for protégés to learn. It's intense. Advertising legend Jay Chiat not only worked closely with each of his employees but would sometimes extend their one-on-one discussions into the night.

2) They rely on the cohort effect: Superbosses strongly encourage collegiality even as they simultaneously drive internal competition. It's an odd combination, except that it works. At Lorne Michael's SNL, you've got 2 hours plus of comedy skits generated by performers who need to collaborate effectively, that then gets winnowed down to 90 minutes in what is pretty much the definition of competition. Seems to work, doesn't it?

3) They accept churn: Superbosses tend to prize talent and creativity over stability of staff. This means that a Superboss will usually not hesitate to hire a person who is "intellectually overqualified," who seems like "too much of a high flyer," or who might not "stay around." For superbosses, talent retention is over-rated.

How is Lorne Michaels from SNL a superboss?

He is an iconoclast. His single-minded passion for his work inspires his protégés. Who in American comedy didn't have a run at SNL in the last 40 years? That list would be shorter than the ones who did. Tina Fey, Jimmy Fallon, Seth Meyers, Bill Murray, Chris Rock, the list is endless. If a superboss is someone who is responsible for some of the best talent an industry produces, Lorne Michaels is clearly a superboss.

Are superbosses just smarter than everyone else?

Superbosses are smart, but their genius lies in something other than traditional brainpower. Superbosses are geniuses at helping other people accomplish more than they ever thought possible. They are the great coaches, the igniters of talent, and the teachers of leadership in most industries.

How would a C-suite executive find the time to be so invested in each member of his/her team?

Most senior executives, and especially CEOs, spend as much as half their time on talent issues already. What I'd like to see is a much better return on that investment. There's no doubt that despite all this energy, company after company is still struggling to crack the code on talent. Superbosses have done just that. So it's not a matter of spending the time, it's a matter of spending that time doing the things that will really pay off.

What are best practices for bosses to customize their interactions with employees individually?

There are three things you need to do:

· Make sure you have incredibly deep content knowledge of your business and the work that is being done.

· Dedicate time every single week to spending time with each of your direct reports, getting to know what makes them tick, and adjusting what you do to bring out the best in each person. It's not one size fits all.

· Be sure to delegate as much as you can for each person on your team. The more responsibility you give good people, the more they will respond, produce, and grow.

What are the three most common barriers to becoming a superboss?

· Fear. Superbosses take on the status quo, and you can't do that if you're afraid of what might happen. If that's the case, find something else to do.

· Doubt. Much of what superbosses do is counter-intuitive. From how they don't let job descriptions get in their way when they see a potential hire they like, to how they sometimes even encourage high performers to move on to bigger jobs elsewhere, superbosses won't get anything done if they lack conviction.

· Complacency. Superbosses are stunningly competitive, always looking for new challenges, like a shark on the hunt. You can't do that if you lack an inner desire to really make a difference.

How would a superboss handle an employee who failed to reach high expectations?

First, pay less attention to him or her. Then, fire him. Superbosses have high expectations that push people to raise their game. But if you can't do that, it's just not the right place to be.

Where do incentives like bonuses, stock options and raises enter the equation above?

Money is good, but superbosses don't rely on it to motivate talent. Over time protégés of superbosses become among the most successful in their industries, and are duly compensated for it.

How does a superboss best articulate a clear purpose that fires up a team?

Three words: communication, authenticity, originality. If you can combine these three elements into your purpose, people will fall over themselves trying to work for you. When Ralph Lauren would talk about his deeply-felt vision of experiencing a luxury lifestyle through the clothes you wear, it changed the fashion industry. Who wouldn't want to be part of it?

What commonalities did legendary bosses like Bill Sanders in real estate, Julian Robertson in hedge funds, and Bill Walsh in professional football share?

· All were energizers. One of Sanders' protégés told me that listening to him describe his vision was like seeing a train accelerating and you had to get on it. Football great Roger Craig said that Bill Walsh had the look of a champion, infusing everyone with confidence.

· All looked for "diamonds in the rough". For Robertson that meant plunking $25 million down on a young Chase Coleman to start a hedge fund that made them billions. For Walsh that meant scouting a highly-touted quarterback only to discover his college roommate who had caught only 11 passes as a senior. His name? Dwight Clark, the receiver who made "the catch" that won the NFC Championship game in 1982.

· All were talent magnets. Because former employees of Sanders, Robertson, and Walsh ended up with hugely successful careers, each of these superbosses became known for their ability to groom young talent, turbocharging careers in the process.

Are you a superboss?

Yes! And the best news of all is that because everything superbosses do can be learned, anyone can become a superboss!

Learn more about Ralph Lauren, and 17 other superboss leaders, in Sydney Finkelstein's new book Superbosses: How Exceptional Leaders Manage the Flow of Talent (Portfolio/Penguin, February 2016). You can order the book on Amazon or your favorite bookseller.