As the nation watches the Tucson Unified School District's spiral into disarray, hundreds of students have walked out of their Tucson schools today in a coordinated protest against the banishment of the district's acclaimed Mexican American Studies program.

Pouring into the downtown Tucson area from Pueblo, Cholla and Tucson high schools, among other institutions, the students brought their march to the offices of floundering Tucson Unified School District (TUSD) administrators. In recent days, administrators and board members have issued a series of conflicting and inaccurate statements and carried out the extreme actions of confiscating books in front of children. Last week, a recently hired assistant superintendent from Texas made a troubling call for the deeply rooted Tucson students -- many of whom trace their ancestors to the town founders -- to "go to Mexico" to study their history.

Supporters of the Ethnic Studies/Mexican American Studies program, which was terminated indefinitely on January 10th by the school board, launched walkouts last week and have vowed to step up their actions for a large-scale walkout, teach-in and launch of a "School of Ethnic Studies" on Tuesday, January 24th. 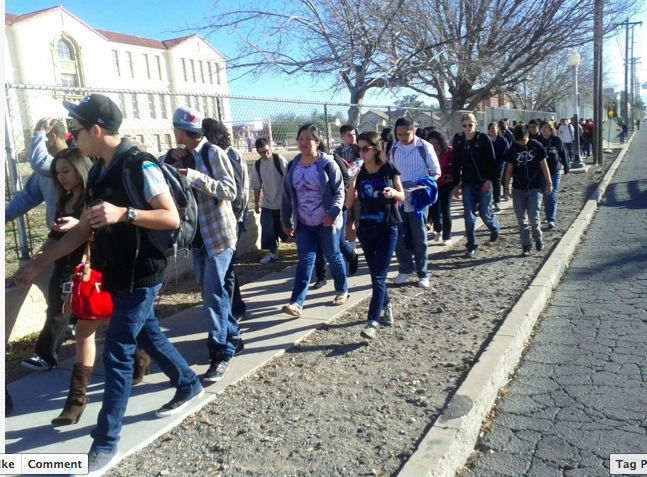 In a district with over 60 percent of the students coming from Mexican American backgrounds, the TUSD board "dismantled its Mexican-American studies program, packed away its offending books, shuttled its students into other classes," according to an editorial in the New York Times on Sunday, because "it was blackmailed into doing so."

As her Tucson school district prepares to celebrate the 140th anniversary of its founding by Mexican American immigrant Estevan Ochoa, Cholla High School student Ahtziri Iñiguez noted that she was following the march in the footsteps of her brother, a graduate of the Mexican American Studies Program.

"I think it's very unfair that people here don't let us learn about our own culture," she said. "My brother took (Mexican American Studies) classes his junior year and he would go home and discuss with my Mom and interested me in education, so I knew I wanted to take these classes."

Less than two months away from the anniversary celebration of Arizona native and United Farm Worker leader Cesar Chavez, Iñiguez added: "We did this walk out to prove if you want something you should fight for what you believe in, because if you don't do anything, nothing will change." 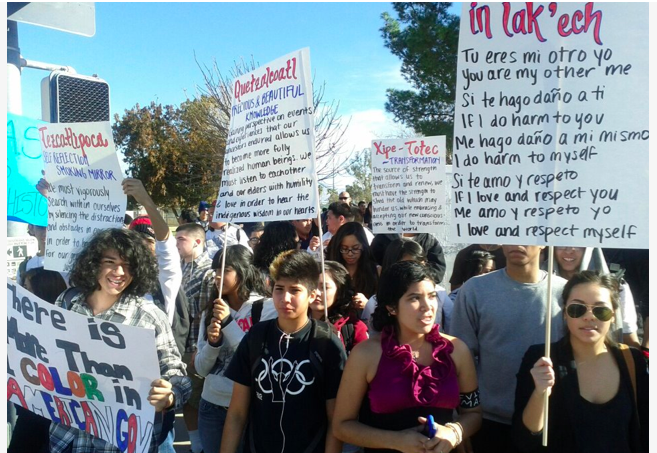 Known as the "Sheriff Arpaio of Ethnic Studies," Arizona education chief John Huppenthal defended his campaign slogan to "stop la raza" in an extraordinary Democracy Now debate on TV last week. The Tea Party activist Huppenthal has referred to Mexican American students as "Hitler Jugend," and raised concerns across the nation about possible criminal behavior last summer when he openly misrepresented the results of an independent audit that praised the Mexican American Studies program and found it in compliance with Arizona's bizarre Ethnic Studies law.

Instead of surrendering to Huppenthal's crackdown, many community leaders in Tucson called on the Tucson Unified School District board to join a federal court suit against the state and summon the Civil Rights Division of the Department of Justice to follow up their investigation of Arpaio and investigate Huppenthal for racial profiling, hate crimes, fraud and even extortion.

Last month, when the DOJ charged Arpaio with "chronic culture of disregard for basic legal and constitutional obligations" and a "widespread pattern or practice of... activities that discriminate against Latinos," Tucson supporters of Ethnic Studies wonder if similar charges could be made for Attorney General Tom Horne and Superintendent Huppenthal, who have invoked violent imagery and pathologically singled out only Tucson's Mexican American Studies program.