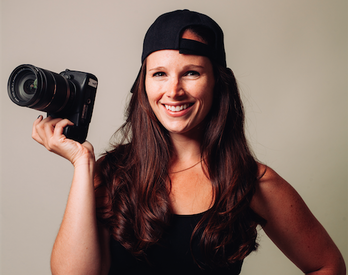 Two years ago after becoming more aware of how women are portrayed in all forms of media, Sarah Moshman decided to take matters into her own hands and make a documentary about extraordinary women in America who's stories aren't being told. After raising $28,590 on Kickstarter, she set out on a month long cross-country road trip from LA to NYC with an all female film crew in tow to interview 17 inspirational women from all walks of life. The result is the inspiring feature-length documentary The Empowerment Project which was completed in May of 2014.

The big question posed in the film is, "What would you do if you weren't afraid to fail?" The film has also won four film festival awards including Best Documentary from Lady Filmmakers Film Festival and has screened to audiences as small as 10 and as large as 1000. You can watch the trailer and get more information about hosting your own screening here: http://indieflix.com/empowermentproject

I am constantly inspired by strong, entrepreneurial women around me, and that I read about all the time. Women are making tremendous strides in so many career fields and I feel like I'm a part of this movement of equality and empowerment. We all stand on the shoulders of the trailblazers that came before us so I just want to use my time and talents to make the most of those privileges I am afforded because of so much hard work and history.

Also when my producing partner Dana Cook and I travel with The Empowerment Project and tour in schools, groups, organizations and corporations I am inspired by the people that speak up and share their stories of triumph and struggle as well as their fears and dreams. I am inspired by bravery and honesty.

Who has had the most impact in your life?

Growing up in a household with cameras always around, I can't dismiss the tremendous impact my Dad Harvey Moshman has had on my life and my career. He taught me the basics of how to be a good producer and filmmaker and watching him problem solve, think on his feet and produce exceptional television in Chicago has probably impacted me more than I can articulate. And now in adulthood, he is less a mentor and more of an equal and a friend to bounce ideas off of since I've earned some stripes in this business. He has taught me that a career is a journey and not a destination.

My Mom Diane has always been there for me as an inspiring career woman to look up to. She switched careers from chemical engineering to law when I was a teenager, which I really admire. The two of them together have been the ideal foundation of support and motivation and I share all of my joy and success with them every step of the way.

What is the hardest lesson you've had to learn?

Patience. Patience with myself and with others when it comes to working on a project that really matters to me is a hard lesson to learn and one I'm still working on. When you are so wrapped up in a film and it's your number one priority it's hard to understand when it isn't someone else's number one. It's important for me to stay present and value the talents and skills of the people around me and have faith that the product will be that much better because I didn't do it alone. Also realizing that the dots may not connect until you can look back and see how it all makes sense for your path. Maybe you weren't ready for that opportunity when it first came up.

You can plan as much as you want but sometimes the universe has even bigger plans that you never could have imagined.

To read the rest of the TuesdayNights interview with Sarah Moshman visit Get Inspired.