The clifftop city of Tulum stands like a silent sentry over the aquamarine waters of the Caribbean. In the morning, when the first rays of the sun began bouncing off its crimson colored temples, shrines and towers, the Mayan city must have lit up like a fireball -- perhaps explaining why it was originally called Zama, or City of the Dawn. 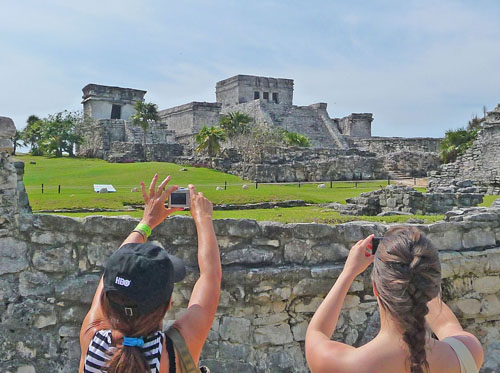 It must have been a show-stopper at night, too. Had the Spanish sailors who first spotted the city in 1518 sailed by after sundown, they'd have been treated to the sight of its buildings shimmering in the glow of torches atop pyramids and ceremonial towers.

It was renamed Tulum (roughly meaning "wall") when a wall was built around the three sides of the city not protected by the cliffs.

For hundreds of years, Tulum thrived as the main trading port for the inland mega-city of Coba, home to as many as 75,000 people. It's believed Coba had thousands of ceremonial, government and residential buildings spread over an area the size of Denver. 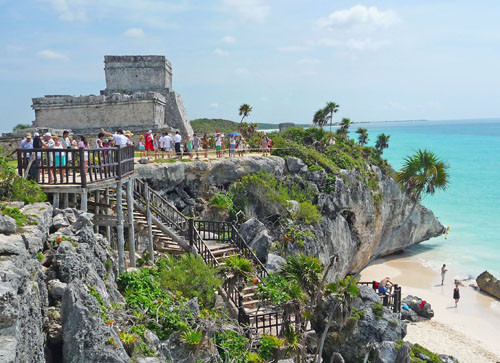 Historians say Tulum's beaches were likely packed with canoes paddled there by merchants from across the Mayan empire as far away as Honduras. No wonder Tulum stood out from the smaller ports -- places such as Xel-Ha, Xcaret and Xaman Ha (now Playa del Carmen) -- running down the Caribbean coast of eastern Mexico.

Fast forward to today, and the 70-mile-long strip of Caribbean beaches stretching from Cancun down to Tulum is Mexico's largest resort area, the Riviera Maya. And Xel-Ha, Playa del Carmen and the other old-time Mayan settlements along the coast are now upscale hotel zones, ritzy residential enclaves, huge amusement and theme parks and sprawling cities. 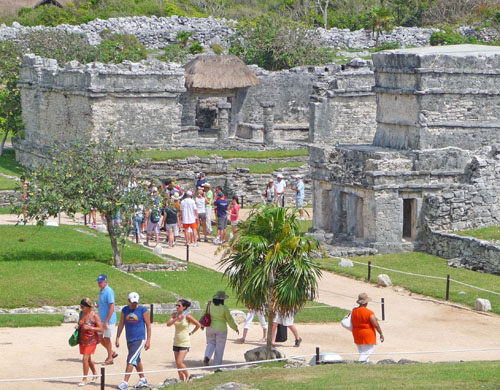 Only Tulum is still Tulum, having been designated as an archaeological site and thus spared from commercial developments. Chances are, you'll rub elbows with thousands of other tourists wandering around the site's 60 or so roped-off temples and shrines. Among favored spots for snapshots is a magnificent 40-foot-high temple called El Castillo (the castle), the Temple of the Descending God (featuring an upside-down figure of the Mayan god of the bees) and a cliffside sanctuary named the Temple of the Winds.

It costs the equivalent of a little over $4 to get into the site and another $40 if you want a guided group tour. For just $1.60 more you can take a trolley ride (the ticket is good both ways) along a quarter-mile walkway from the entrance of the park to the archaeological zone. A tip: Take the trolley... it's blazing hot out there.

Outside the zone, Tulum City, centuries ago home to a few hundred farmers and temple builders, is now a modern-day city of 25,000 (and growing every day). Many are expatriates from the U.S. and Canada along with a good number of transplants from Germany, Spain and The Netherlands.

Visitors to Tulum typically arrive in tour groups from the 500 hotels in Cancun and along the Riviera Maya.

Tourists who opt to spend a few days in the Tulum area have a choice of some 45 hotels either in town or on nearby beaches. They range from modest inns with rates as low as $60 a night to luxury resorts priced as high as $500 a night.