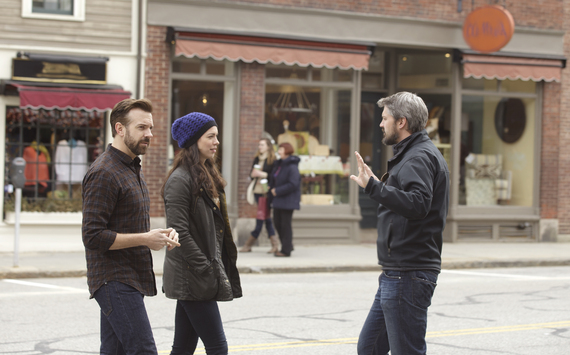 Hunter Miles is dead, and also immortal. This is the spirit, but not the heart, of Tumbledown, a rare new movie that had its world premiere at the Tribeca Film Festival last week.

That heart is very much still in this world, and alive. Tumbledown, written by Desi Van Til, is the story of a young -- far too young -- widow, Hannah Miles (the beyond excellent Rebecca Hall). Her celebrated, reclusive singer-songwriter husband has died in a fall on Tumbledown Mountain, deep in the Maine woods near their home, and her hometown. She brought him here to escape flashbulbs and fans after his unnamed album of twelve folk songs becomes a sensation. Now she lives stunned, angry, yearning, determined and alone in the log house they shared, shunning society beyond family and girlhood friends and two large, entertaining, and protective boxer dogs.

From this quiet premise spins out a tale of passion, wry humor, love, loss, and intelligence, more moving and memorable than movies are these days.

Hunter Miles, in his retreat to the woods, shares a lot with Bob Dylan and The Band in Woodstock, circa 1967. In his beauty (we see only a few blurry photos of him; and one flashback of him in a Rick Danko hat, paddling a canoe), and his early, tragic death, he reminds us of Jeff Buckley, of Gram Parsons. But though this movie revolves round and about him, and his growing legend -- and the people who want to control his legend and legacy -- Miles is ultimately to be both praised, and buried.

His widow is writing a biography of him. She fills her laptop with fragments, memories, hopes, conversations -- unfiltered, unedited, just as grief and love bring them to her mind and fingertips. Though we discover she has a Ph.D from Brown and has written one book of literary criticism (the dissertation, of course), the task of writing Hunter Miles is too much for her -- as it would be for many who try to resurrect or retain, in words, one they love. Enter Hofstra junior professor Andrew McCabe (Jason Sudeikis).

Sudeikis is superb at showcasing both the young professor's genuine affection for Miles and his art, and his entirely unscrupulous smarminess in wanting an academic scoop. Like Tom Stoppard's perfect Bernard Nightingale, in Arcadia, Andrew will say and do anything in his hunt for more -- even after he putatively falls in love with Hannah (who perhaps not coincidentally shares a name with her counterpart in Arcadia). With a gesture, an eyebrow, by swallowing hard, Sudeikis conveys more debatability that other actors do with handwaving and many lines. My stomach clenched as he watches Hannah drive away to town, puts out the dogs who are watching him (humor that makes what he's doing all the worse), locks the door, and begins to systematically search her bedroom -- pausing over bullets in a fiddle case, an x-ray that literally shows him the inside of his hero's head. Again, when he tells Hannah that his father committed suicide, he seems less revelatory than dishonest and fishing. But that's the thing about Tumbledown. You just don't know -- though you sure as hell are made to think. And, increasingly, you like Hannah, and are warmly glad to feel Andrew standing in your shoes as he begins to, too.

The cameos shine. Joe Manganiello is delightful, and hot, as the local large lineman for the -- appropriately -- power company. Blythe Danner, as Hannah's mother, rules the Easter lunch table with profane, loving brightness, missing Hunter and yet yearning for grandchildren. Griffin Dunne runs the local independent bookstore as well as the town newspaper; I wanted his job(s), and grinned at his David Beckham fetish. Dianna Agron is sharply cute as Andrew's girlfriend, who works one of those unspecified jobs "in the recording industry" and pulls the classic soon-to-be-ex-girlfriend move of arriving early and unannounced to check up on her dude. A kid who drives a four-wheeler and rejoices in the name of Ethan Woodcock (Gabe Gibbs), and a slender girl who comes to lay flowers at Hunter's grave (Pepper Binkley) steal their scenes, respectively, with an action and a one-liner.

Two of the best things about Tumbledown are the way it looks, and the way it sounds. Director Sean Mewshaw has made a frozen Maine lake, mountains and woods varied and beautiful. The music grounds, but does not dictate, the course of the movie, which is as it should be: Hunter Miles's music lives on, but he does not. The songs -- Damien Jurado wrote most, and supplies Hunter's voice -- are to my ear a cross between Sigur Rós and Jónsi, and Ray Lamontagne. Wrap your head around that, and you'll see that it sounds gorgeous and calm and real: things that Tumbledown is.

A decade ago, Van Til and Mewshaw worked together on a gem of a short, Last Night (2004), based upon a James Salter story and starring Frances McDormand. Now, in their feature-length debut, the couple have told a story of their own, of the Maine in which Van Til grew up and where they now live, and also a Maine of the imagination. It's a story of simple grace, power, humor, and beauty. The dialogue sparks and shines; the laughs come when you need them; the surprises are small and comforting; and the aim is true. 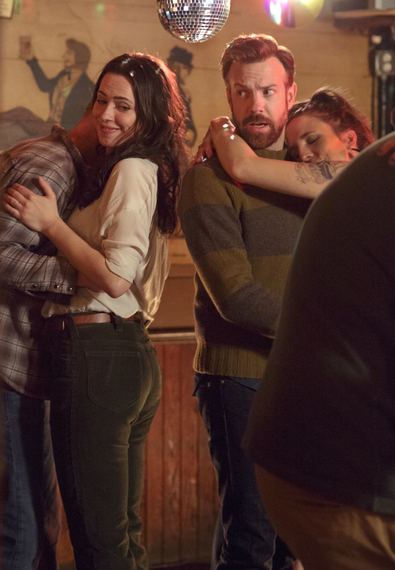 Hannah (Rebecca Hall) and Andrew (Jason Sudeikis) dance, but not with each other