When you enter this New Mexico city during the holiday season, you might get an awesome greeting -- Wild West style.

For the past 20 years, the Albuquerque Metropolitan Arroyo Flood Control Authority (AMAFCA) has put smiles on drivers' faces with a giant "snowman" that's made with an unusual component, common in the area -- tumbleweed. The 13-foot decoration stands along Interstate 40, generating honks from delighted commuters every day. 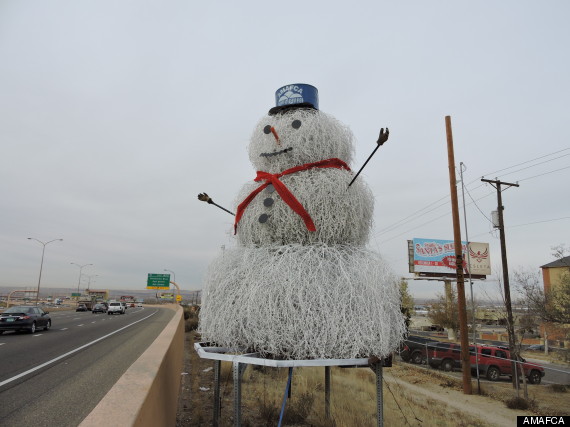 "The first time I saw it, I didn’t believe what I saw -- a tumbleweed snowman," Ronnie Carrillo, an Albuquerque resident, told Fox News. "But now this is our holiday icon." 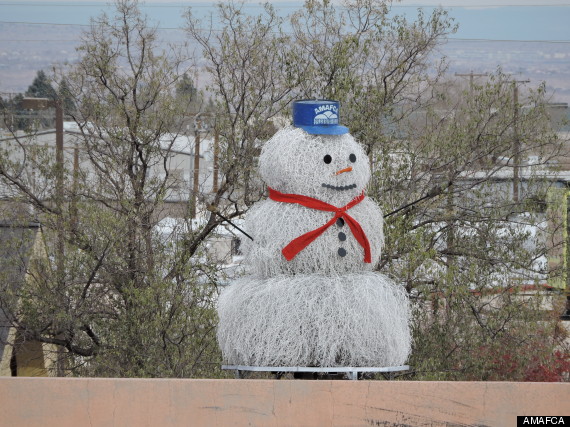 While some say the snowman started as a joke, the tradition has turned into a pretty serious affair, with a great deal of effort going into its creation, Jeffrey S. Willis of AMAFCA told The Huffington Post in an email.

The AMAFCA crew aims to create a bigger decoration each year, collecting the largest tumbleweeds they're able to find growing in their flood-control facilities. The department welder, James Moya, then creates the structure that supports the friendly giant. 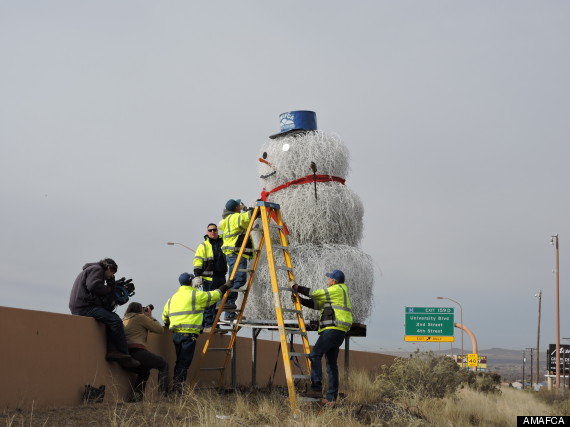 And though Albuquerque only receives an average annual snowfall of less than 10 inches, Willis told HuffPost that the tumbleweed snowman has proved that you don't need any flurries to have some winter fun.

Psy
Daily Picks And Flicks
This is major commitment to the bit.
Cartman From "South Park"
Reddit
It's easy, yet perfect.
Reddit Alien
Reddit
There are a million of these, but this is definitely the cutest.
Jabba The Hutt
Slash Film
The coloring really brings out his eyes.
My Neighbor Totoro
Reddit
Now with cute little babies inside.
Dalek From "Doctor Who"
Reddit
Not as scary in snow.
Stewie From "Family Guy"
Red Bubble
He's angry all the time.
Brian From "Family Guy"
Runners World
The drink is an excellent touch.
Conan O'Brien
Reddit
Even without a face, we still love Conan.
The Cat In The Hat
Reddit
So whimsical!
"Jersey Shore" Cast Member, Various
Reddit
This unnamed "guido" speaks for all cast members. (Or maybe Bono?)
Freddy Kreuger
Reddit
His time is almost over.
Spartan From Halo
Haloway Point
Guarding your house, one snowflake at a time.
Homer Simpson
Quitor
Watch out for Mr. Plow.
AT-AT From "Star Wars"
Reddit
Their armor's too strong for blasters.
South Park Characters
Reddit
Forever waiting by the bus stop.
R2D2
Syracuse.com
If that kid did the whole thing he is very impressive.
Yoda
Craftster
Ask him all of your questions.
The Simpsons
Funny Cool Stuff
This can't be real, right?
Sonic
Comics Alliance
If he's not running, he's not happy.
Bender From "Futurama"
Comedy Central
This is a great version of our favorite robot.
Stitch From "Lilo And Stitch"
Pink Tentacle
Such great detail!
Arnold From "Hey Arnold"
Deviant Art
Move it football head.
Pikachu
Deviant Art
Gotta catch 'em all.