Back in January, Tumblr made headlines when it announced that it was growing at nearly a quarter billion impressions every week. The popular blogging platform mixes the traditional blog with the simplicity of Twitter and ties it all together with barebones social networking features.

With just 7 simple ways to post (text, photo, quote, link, chat, audio and video) and a love for animated GIFs, it's proven even easier than Blogger or WordPress as a way to publish all sorts of media on the Web. Like a more visual Twitter, Tumblr and its community's love for cats, animated GIFs, Carl Sagan and the Web's ephemera have spawned delightful sites like Hovering Art Directors, Scanwiches, Awesome Parents and Hungover Owls as well as more "official" accounts from the likes of NPR's Fresh Air, New Yorker, Newsweek, and The Atlantic. And, HuffPost Tech, of course!

Once you're up to speed, check out our list of 33 Tumblr blogs you need to know.

It's a fun, casual community without Facebook's inanity or Twitter's churn, and we've got 16 must-know tips and tricks for everyone from beginners to pros. Read on!

Tumblr Guide 101: Tips And Tricks For Building Your Site, Posting And More
Tumblr Tips: 16 Things You Need To Know 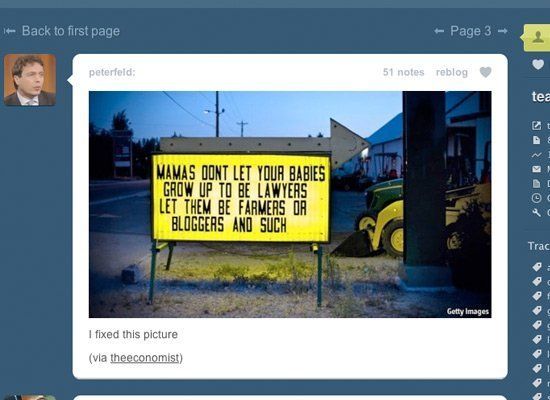 1 / 16
Basics: The Dashboard
Once you've got an account, the Dashboard is the main interface you'll use to track your posts, see the posts of those you follow, monitor who is interacting with your blog, and customize your design.