A few weeks ago, I posted a picture of myself on my Tumblr blog. I had no makeup on and my bangs pinned back, revealing the abnormalities caused by Pfeiffer Syndrome, a condition I was born with. To be honest, I didn't think much of it. After taking the picture, adding a description and posting it, I turned off my computer to go to bed. Waking up the next day, I had over a thousand messages in my inbox, tens of thousands 'reblogs' and countless new followers. Here is a screengrab of the post: 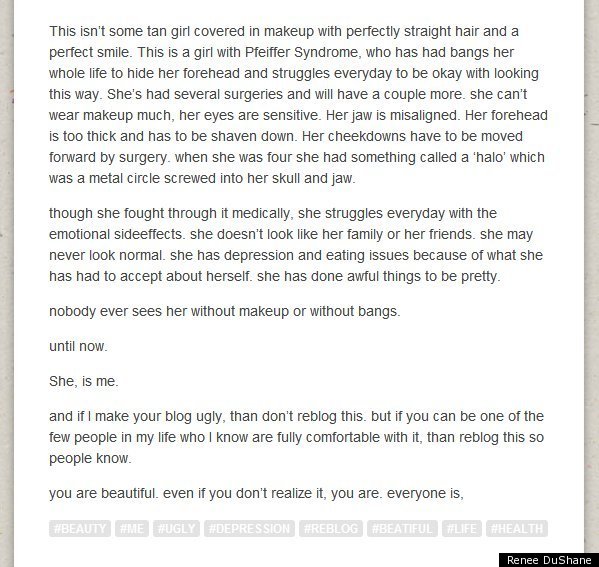 The blogger inside me was excited to get all this activity on my page, but the teenager inside me was struck by the messages I was getting. I was being called an "inspiration," and people started telling me their stories and praising me for being so open with mine. I hadn't really thought that putting it out there vulnerably would strike anyone. After all, I have been living with this for 18 years and I'm used to it.

After a while it occurred to me that not only were people reacting to my story but to the fact that I was different, and different isn't something our society trains us to like. When I go out in public people will stare. I can't wear makeup like a normal teenage girl. It can be an inner battle to leave my house, but again, I've grown used to it. I've accepted a lot about myself already.

So what about Tumblr make me look at things differently? These people who got something out of my story made me take another look at society. On Tumblr, as odd as it seems, some people truly see through society. The only place they feel safe and able to express these opinions is on their blog (not to say Tumblr is totally hate-free, but it's as close as I have ever seen). This says a lot about media causing self-image problems, in my opinion.

Who gave celebrities, magazines, and models the right to tell us what is "normal"? We see ad campaign after commercial after movie after celebrity red carpet, and take those messages as right. But in reality, shouldn't we be able to define beautiful ourselves? Shouldn't 10 nice comments weigh more than one negative?

Society tells us what is beautiful, to make us buy or do anything to be that way. I may not love the way I look, as a lot of teenage girls don't, but makeup and designer clothes won't change that. The problem has become internal because these opinions of beauty have become fact. You aren't beautiful if you don't have this, or if you don't look like her.

Tumblr is where I took my story, because it is a place to be heard and helped, without judgment. It's as if you are free from the rules of society. You may think society isn't to blame, but if this whole thing has taught me anything, it's to challenge fact. Challenge the definition of what is beautiful.