It's been almost four years since the explosion of BP's Deepwater Horizon oil rig in the Gulf of Mexico, but news of the spill's terrible consequences continues to dog us.

Last week, a study published in the Feb. 14 issue of Science revealed the Deepwater Horizon disaster may have caused serious damage to the hearts of tuna and other animals affected by the spill.

Specifically, the scientists from Stanford University and the National Oceanic and Atmospheric Administration (NOAA) who conducted the study said that crude oil demonstrably interferes with the ability of fish heart cells to beat effectively, resulting in "a slowed heart rate, reduced cardiac contractility and irregular heartbeats that can lead to cardiac arrest and sudden cardiac death," per a recent media release.

The scientists say that researchers have long known that certain chemicals, such as polyaromatic hydrocarbons (PAHs), found in crude oil can be toxic to the developing hearts of fish embryos and larvae; however, the specific mechanisms involved have not been understood -- until now.

After studying the heart tissues of juvenile bluefin and yellowfin tuna in the lab, scientists say they've likely cracked the mystery, perhaps proving once and for all just how damaging crude oil is to the hearts of fish.

In their report, the researchers explain how PAHs can disrupt the specialized cellular pathways -- where molecules like potassium and calcium ions move in and out of cells -- that control heart rate and contraction in the cardiac muscle cell.

"The ability of a heart cell to beat depends on its capacity to move essential ions like potassium and calcium into and out of the cells quickly," said study co-author and professor Barbara Block, per the release. "This dynamic process, which is common to all vertebrates, is called 'excitation-contraction coupling.' We have discovered that crude oil interferes with this vital signaling process essential for our heart cells to function properly."

This interference could lead to "life-threatening arrhythmias" in the animals affected, the study reads, adding: "These results lead us to believe that PAH cardiotoxicity was potentially a common form of injury among a broad range of species during and after the [Deepwater Horizon] oil spill."

Speaking to The Huffington Post over the phone last week, Jacqueline Savitz, vice president for U.S. Oceans at the conservation group Oceana, said that while she was not at all shocked by the scientists' findings, she said they confirmed her worries about the well-being of the animals impacted by the Deepwater disaster.

"It didn't surprise me at all," she said. "We've known all along that oil is toxic to marine animals. We knew it was causing toxic effects immediately. But a lot of people don't necessarily believe what scientists tell them and need proof as to how these animals died. Now we know exactly how the oil was working on [the fishes'] hearts, so we can put to rest this discussion about how oil is toxic to fish."

The study, she added, is a "reminder that the Deepwater Horizon oil spill was the biggest environmental disaster" of our time.

"Even though we can't see many of the effects [of the disaster], they're still happening," Savitz said. "People think that nothing is washing up on the beach so everything must be OK, but a lot is happening under the surface. Even if we can't see them, the fish and other animals are suffering when we spill oil in the ocean."

Last week, BP issued a statement in response to scientists linking oil spills to heart issues in fish. "The paper provides no evidence to suggest a population-level impact on tuna or other fish species in the Gulf of Mexico," the statement reads. "Bathing isolated heart cells with oil concentrations is simply not comparable to the real-world conditions and exposures that existed in the Gulf for whole fish." (Click here to read BP's full statement.) 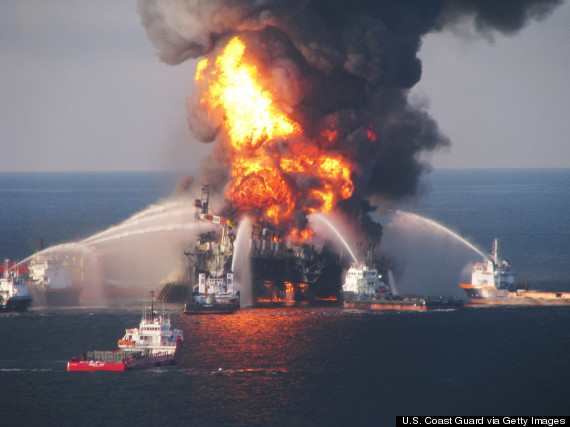 Fire boats battle a fire at the offshore oil rig Deepwater Horizon on April 21, 2010, in the Gulf of Mexico off the coast of Louisiana. It is estimated that about 4.9 million barrels of oil were discharged into the Gulf before the rig was finally capped.

This, however, isn't the first time that the oil spill has been linked to animal health issues. In December, a report published in the journal Environmental Science & Technology revealed that bottlenose dolphins living near the Deepwater spill site are much more likely to suffer from lung damage and lower hormonal levels than dolphins living in areas not impacted by oil. In 2012, Fox News reported that scientists blamed PAHs released from the spill for the many eyeless shrimp and other mutant creatures found in the Gulf after the Deepwater disaster.

"This recent study is just one more layer of confidence," Savitz said. "Oil has devastating effects on animals… maybe humans too."

Indeed, scientists behind the new study say their findings may have implications on mammal hearts, including those of humans.

“Impressively, the cardiac excitation-contraction coupling pathways are the most conserved pathways in all of animals. It means that the same ion channels present in tuna to make its heart beat are present in humans,” Block told the BBC.

Since PAHs can also be found in coal tar, air pollution and stormwater runoff from land, the risk to humans and other animals is potentially tremendous, the scientists say.

Note: This article has been updated to include the statement from BP.