But rioting broke out in one southern city, with police firing teargas to disperse hundreds of youths who burned tires and blocked streets to demonstrate against the victory of an official from Ben Ali's old guard.

Essebsi beat rival and incumbent Moncef Marzouki with 55.68 percent of the vote against 44.32 percent, the results showed.

A former official in Ben Ali's one-party administration, he has recast himself as a technocrat and his secular Call for Tunisia party profited from the backlash against the country's first post-revolt Islamist government, which many voters blamed for turmoil after 2011.

"All shops are closed. They are chanting 'No to the old regime'."

Another resident told Reuters protesters had tried to storm a police station, but had been driven back by teargas. Local police officials could not immediately be contacted.

Critics of Essebsi, an 88-year-old former parliamentary speaker under Ben Ali, see his return as a setback for the 2011 uprising that ousted the veteran ruler and put the North African country on the road to full democracy, with a new constitution and free parliamentary and presidential elections.

The Tunisian uprising also inspired the Arab Spring revolts across North Africa and the Middle East.

As frontrunner, Essebsi dismissed critics who said victory for him would mark a return of the old guard. He argued that he was the technocrat Tunisia needed following three messy years of an Islamist-led coalition government.

Marzouki, who had sought refuge in France during the Ben Ali era, painted a potential Essebsi presidency as a reverse for the "Jasmine Revolution" that forced the former autocrat to flee into exile. (Editing by Patrick Markey and Angus MacSwan) 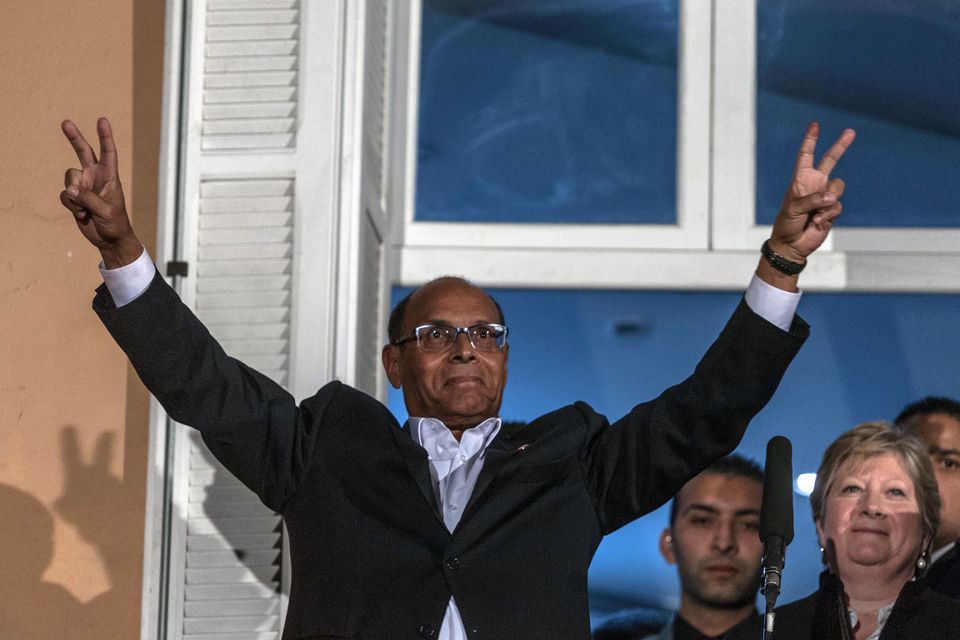 1 / 12
Tunisian presidential candidate Moncef Marzouki makes the V sign prior to give a speech, after the second round of the country's presidential election, in Tunis, Sunday, Dec. 21, 2014. (AP Photo/Ilyess Osmane)
ASSOCIATED PRESS