The region of Turkana, in the North of Kenya has gone for over five years without a good rain capable of making the grazing lands grow enough grass to feed the region's livestock, its sole source of economic livelihood.

It is just one of many regions in the Horn of Africa that have been affected by the serious drought that has put more than 15 million people at risk.

The photographs speak for themselves. But the stories of the people of Turkana confirm the urgent need for assistance that will mitigate their hunger and the necessity of developing long-term projects that will enable them to progress in the face of catastrophic climate events, which are occurring with ever greater frequency.

Words and pictures by Irina Fuhrmann of Oxfam. 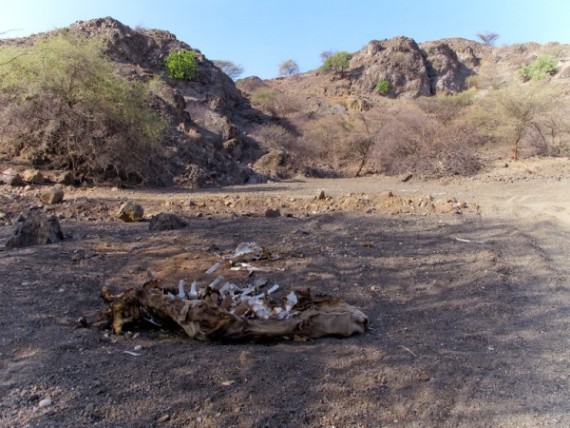 When the Camels Die. The camel - the animal best equipped to resist the effects of drought, the animal that nourishes families in the dry season, providing milk, meat, and fat - is dying. The cattle, the goats, and the sheep have already died. But when the camel dies, pastoral communities weep, for they know that along with it die all of their hopes for the future. 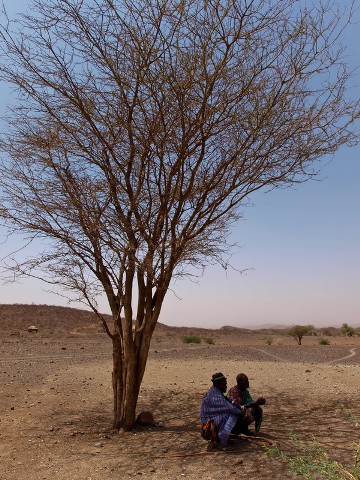 Herdsmen Wait for the Rain. There is no water, and the earth is so dry that deep cracks open in the ground under one's feet. Pastoral communities, which are traditionally nomadic, have nowhere to go to find grazing land, and their only option is to wait for the arrival of rain. This will not occur for several months, and in the meantime the few animals that survive will be so weak that they will no longer serve as objects of barter. 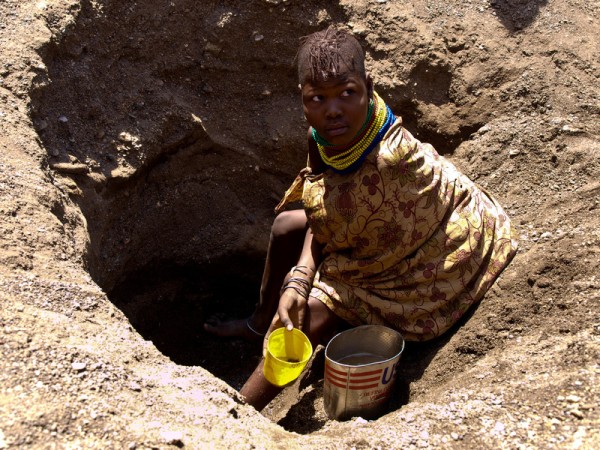 Muddy Water. The local residents dig water wells in the dried-up river beds. At a certain depth, a brown, muddy liquid emerges, which will be consumed by both people and animals. It is the only drinking water available to the residents of many communities in Turkana, a marginalized region where no money has been invested to develop water distribution centers or to dig wells. 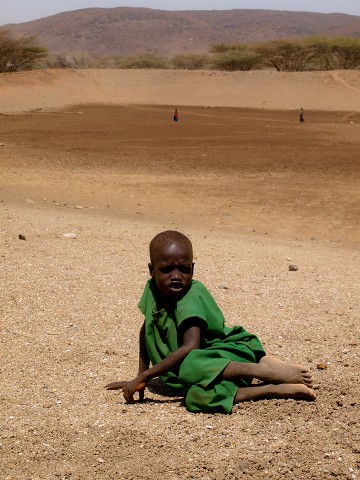 The Reservoirs Are Dry. Created by the community to collect rainwater, these reservoirs have been empty for five years and they have now become a place where children play. Many of these children have never seen a true rainfall in their entire lives. Today they depend on the nutritional assistance they receive at school, where they show up every day in their green uniforms to receive their daily ration of porridge. 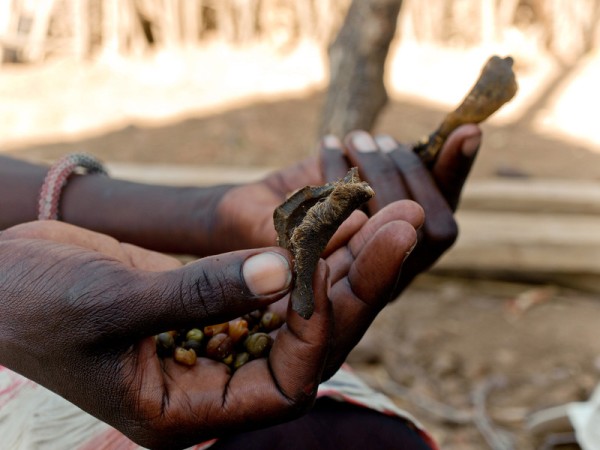 Fruit and Animal Skins. Many families have gone for weeks living only on wild fruits they find on local bushes. These fruits must be boiled for several days before they can be consumed. Dried animal skins are also used to stave off hunger for a few hours. 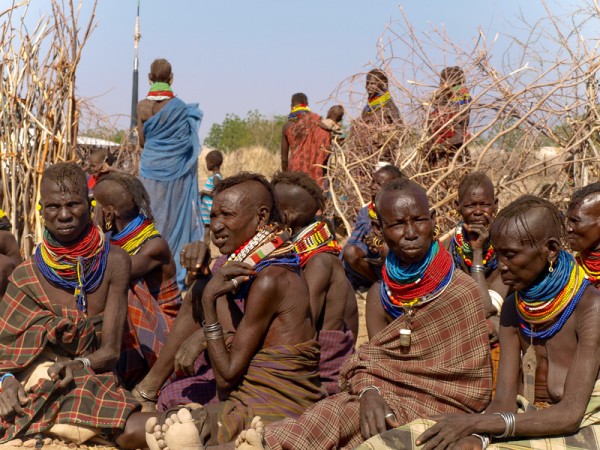 There Are No Weddings. Traditionally, the men of Turkana marry after delivering a bride price to the bride's family, consisting of a predetermined number of head of livestock. The drought and the loss of livestock have paralyzed all of these celebrations, which are an essential cultural component of pastoral communities. 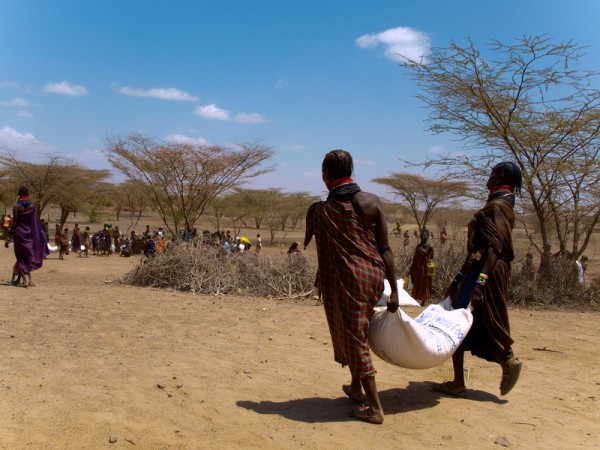 More Aid Is Needed. The World Food Program's food distribution program, implemented by Oxfam, has been reaching only the most vulnerable families over the last several months. But, given the growing needs of the region, this is no longer adequate. Thousands of families depend on the corn, dried peas, flour, and oil they receive each month from the distribution center. These supplies are delivered in large quantities and then distributed in small bags so recipients from affected communities can carry them to their homes, which are often located in remote areas. 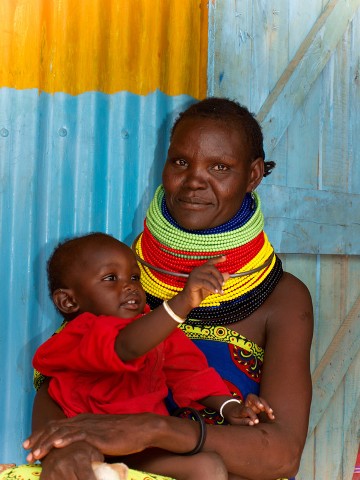 Alice's Shop. Just Over ten years ago, Alice Atanbo was a beneficiary of one of the cash-for-work programs Oxfam implemented in Turkana. With the money she received, she decided to buy some basic products such as sugar, flour, and milk, and sell them in her establishment, which now supplies the community of Milima Tatu. Her husband's livestock died as a result of the drought, but she and her eight children have survived thanks to the income from her shop. Alice also acts as an exchange agent for Oxfam. The sacks of food supplies arrive at her establishment, where beneficiaries with food vouchers go to pick up their supplies. 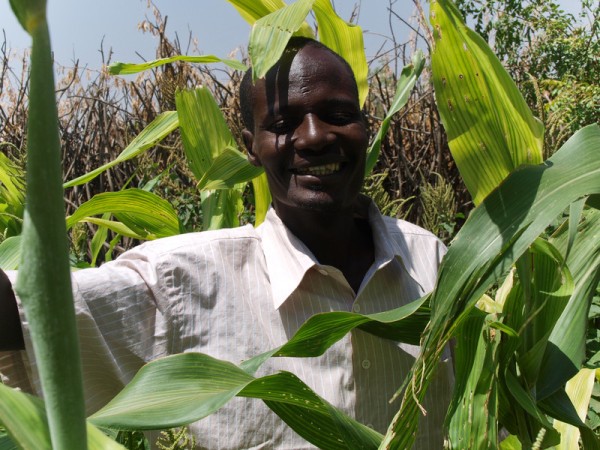 Family Vegetable Gardens. It's unusual to find green leaves in Turkana, but in the village of Kaaleng, several family gardens are beginning to thrive. The village, which is supplied with water thanks to the solar-powered energy pump installed by Oxfam, has fertile soil and several of its residents, such as Benson Kore, have begun to grow vegetables. Corn, tomatoes, onions, and other vegetables grow on a few square meters of soil that Benson cultivates with great care. He is assisted in this by his children and by those of his sister, since, given the seriousness of the crisis, the family has had to pull together in order to confront the loss of the livestock upon which they once depended. Benson still has five goats left, and they subsist on the waste materials from his vegetable garden. 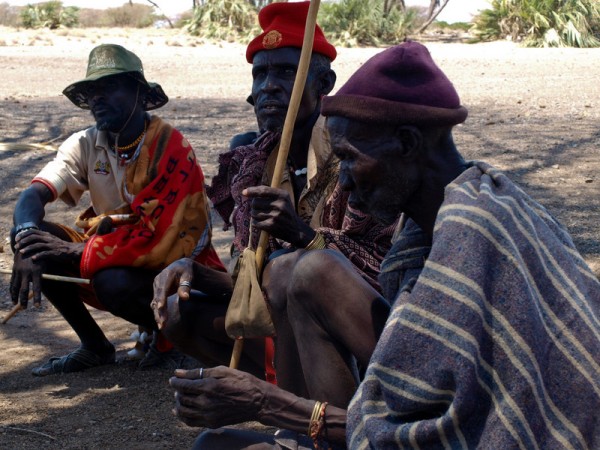 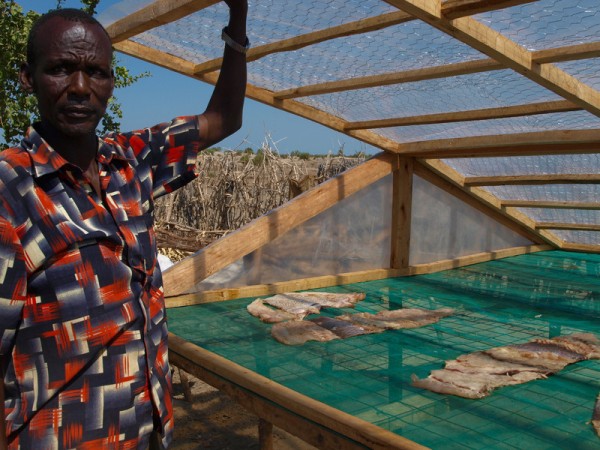 Herdsmen Who Fish. The Akadeli school for herdsmen is a pilot project developed by Oxfam that was conceived as a resource to allow herdsmen of Turkana to regroup in the face of the crisis created by the drought. At their meetings, the herdsmen share their knowledge and their experiences, which range from techniques for treating illnesses to making decisions about the best time to sell livestock.

Given the seriousness of the crisis, the group works to disseminate this information to their fellow herdsmen. But the majority of them have lost all of their animals, and so, with the help of a system of community microcredit, they try to find new solutions. One of these, supported by Oxfam, is the development of fishing in Lake Turkana. Thanks to these fish, which are usually dried and sold, the herdsmen have found new sources of income and have diversified the nutrients in their own diet as well.

Find out more about Oxfam's response to the food crisis in East Africa.