ANKARA -- Last Saturday, thousands of peace marchers gathered in front of the train station in the nation's capital. The train station is one of the few remaining buildings signifying the early Republic. That Republic is now in danger of crumbling. Around 10 a.m. that morning, two suicide bombs killed at least 106 people, including a 9-year-old boy right across the station.

Turkey's already fragile peace has been shattered. The nation is utterly traumatized. Turkey had been experiencing renewed fighting between the PKK and the security forces in recent months but the heart of the capital has never been witness to such a deadly terror attack, which constitutes the deadliest terror incident in the Republic's history.

Turkey has always been a divided nation but the rise of Recep Tayyip Erdogan in 2003 has fueled the polarization in the country. Throughout the years, Erdogan has made polarization and consolidation of his own camp an enduring political strategy. Things particularly worsened after the 2011 election, which marked the third consecutive win of Erdogan's Justice and Development Party (AKP). In 2011, he ousted dozens of centrists and liberals from the party and adopted a more assertive conservative agenda. He also decided to change the Constitution so he could become an executive president running the country for another ten years from the presidency.

Erdogan has divided the country on ethnic, sectarian and lifestyle levels in an unprecedented manner.

Erdogan's increasingly conservative/Islamist agenda alienated many, and his persona became more controversial. The first response to his patronizing rule came in the form of the Gezi Park protests in 2013, which left eight people dead and injured thousands. A few months later, his government and his family were implicated in an embarrassing corruption scandal. Erdogan's response has been to turn more authoritarian. Hundreds of judges and prosecutors and thousands of police officers have been reshuffled to prevent prosecution. He began to put immense pressure on the media, intellectuals, nonprofits, businesses and opposition, and he empowered the security forces with extraordinary authorities.

Hollowed out institutions were no match to Erdogan's dominance so the Turkish electorate remained the only means to a correction. That correction came on June 7 this year when the Kurdish Peoples' Democratic Party (HDP) passed a 10 percent threshold and made it into the Turkish Parliament, thereby ruining Erdogan's plans for an executive presidency. For the first time in its history, the AKP failed to garner a majority in the Turkish Parliament. A coalition should have been formed. However, Erdogan prevented the formation of a coalition, and under circumstances which are still not yet clear, the peace process with the PKK was broken. Renewed violence erupted, leaving 150 security personnel dead in three months. Not surprisingly, the country is very tense.

Saturday's bomb attack was reportedly perpetrated by Turkish Islamic State cells, and it was not the first ISIS attack. In June, they attacked an HDP rally just two days before the election. Three weeks later, a suicide bomber killed 33 youth trying to bring aid to Kobane, effectively killing the peace process. The Ankara attackers have been identified as part of the same cell. The Turkish people expect accountability. Speculations that these ISIS cells have not been tracked properly -- or worse were deliberately neglected -- abound. Few expect any political resignations in this polarized political climate. The country is heading into a fateful election on Nov. 1 but there is growing concern that the election will not be conducted under free and fair conditions.

The sole arbiter of Turkey's future remains the electorate. It is crucial to get out of this mess through democratic means.

Turkish democracy has never been so fragile in recent memory. Erdogan has divided the country on ethnic, sectarian and lifestyle levels in an unprecedented manner. The Turkish opposition is weak and divided. The sole arbiter of Turkey's future remains the electorate. It is crucial to get out of this mess through democratic means.

The best-case election outcome would be an AKP coalition with the main opposition -- the Republican People's Party (CHP), which would lessen the tension and polarization in the country. But this is easier said than done. The AKP has been used to running the country unchallenged for more than a decade and is thus not ready to share power. And the corruption charges hang like the Sword of Damocles above them. The AKP knows that any coalition partner will inevitably bring the corruption charges (which include Erdogan and his son) to the table. Nevertheless, there is more hope this time around as the economy is extremely fragile and society is anxious to see a new government being formed as soon as possible.

The current tension and polarization is not due to the domestic situation alone. Erdogan's disastrous Syria policy has imported the violence and instability of Syria. Turkey's soft approach toward ISIS and its movements across the border has now allowed domestic ISIS cells to prosper. Further, Turkey is host to more than two million Syrian refugees. The social and economic impact of this reality is hitting urban Turks more and more.

There is growing concern that the election will not be conducted under free and fair conditions.

The confrontation with the PKK also has regional ramifications. The PKK-affiliated Syrian Kurds are allied with the U.S. against ISIS, a fact complicating relations between Ankara and Washington. Erdogan's Syria policy has never been popular, even among AKP supporters. Hence, many blame Turkey's current instability on the government's insistence on supporting the Syrian opposition militarily.

The Ankara bombing has confronted the nation with the dire realities of homegrown terror in the heart of the capital. The attack is likely to change Turkey's politics permanently. Traumatized by the terror attack, Turkey will first need to facilitate free and fair elections, then form a coalition government and then go about rehabilitating the country's deep divisions. Rooting out domestic ISIS cells must be a priority. The alternative is the Pakistanization of Turkey. We cannot afford to let this happen.

Turkey Is Heading Into the Abyss, Thanks to Erdogan
Ankara explosions 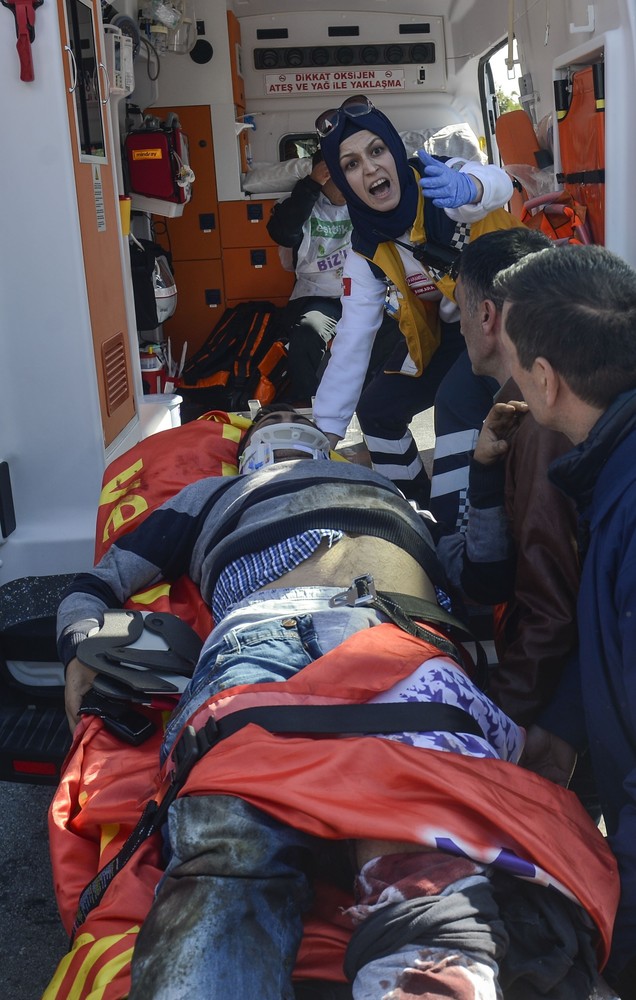