The history of Tal Abyad is a metaphor of the Syrian civil war and of the ambivalence in the larger motives of the various actors engaged in the ongoing struggle to expel Islamic State (IS) jihadists from the region. The Syrian town lies along the Turkish border with Syria, mirrored by the Turkish town of Akcakale on the opposite side of the frontier.

Its population is a mix of Kurds, Sunni Arabs and Turkmen. Historically, the town of some 50,000 people was an important border crossing between Syria and Turkey. During the Syrian Civil War its importance has been underscored by its proximity, less than 50 miles, to the Islamic State's capital, Ar Raqqah. The border crossing was an important transit point for jihadist fighters traveling from Turkey to join IS militants in Syria as well as being an important smuggling route for the Islamic State.

Islamic State jihadists captured the town on June 30, 2014. They overran the Kurdish forces, comprised of YPG (People's Protection Units) and the Kurdish Front Brigade which were defending the town. The YPG is the Syrian offshoot of the PKK (Kurdistan Worker's Party). The PKK is a militant, secular, leftist organization based in Turkey that has been waging an armed struggle against the Turkish government for self-determination of the Kurds in Turkey.

The Kurds comprise between 15% and 20% of Turkey's populace. The PKK has been implicated in hundreds of attacks against Turkish security forces and has been branded a terrorist organization by both Turkey and the United States. Both organizations are separate and distinct from the Peshmerga, the military forces of the autonomous region of Iraqi Kurdistan. Although the various Kurdish groups in Iraq, Syria, Turkey and Iran share a common ethnicity and culture, politically and ideologically they are very different.

On July 21, 2014 IS militants announced that all Kurdish inhabitants had to leave Tal Abyad or they would be killed. Thousands of the town's inhabitants, including Turkmen and Sunni Arab families, promptly fled. Islamic State militants systematically looted the abandoned homes and resettled displaced Arab refugees from the surrounding region. 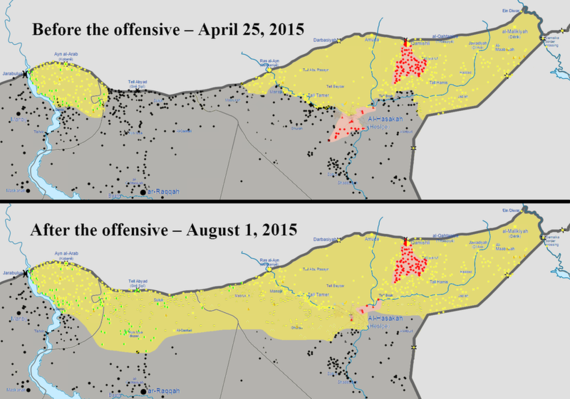 A year later, on June 15, 2015, the town was recaptured by a combination of YPG, Free Syrian Army (FSA) forces and a variety of Arab militias operating under the umbrella of the Burkan al-Furat (The Euphrates Volcano), the YPG-FSA "joint operations room", supported by air power from the U.S. and its coalition partners. Following the battle, U.S. officials praised YPG troops as being the most reliable of the ground forces working with the U.S. to roll back the Islamic State. The victory was seen as striking proof of how the combination of overwhelming American air power and effective and reliable boots on the ground could decisively defeat Islamic State forces.

The capture of Tal Abyad had another consequence. By combining Kurdish control of the Kobani and Jazeera cantons it created a "Kurdish corridor" extending from Iraqi Kurdistan all the way to the city of Kobani in north-central Syria. It thus linked up two of the three current autonomous Kurdish zones in Syria, in the process forming the nucleus of, what the Turkish government of President Recep Erdogan fears, will, potentially, be a Kurdish controlled zone that could someday serve as the core of an autonomous Kurdish state. 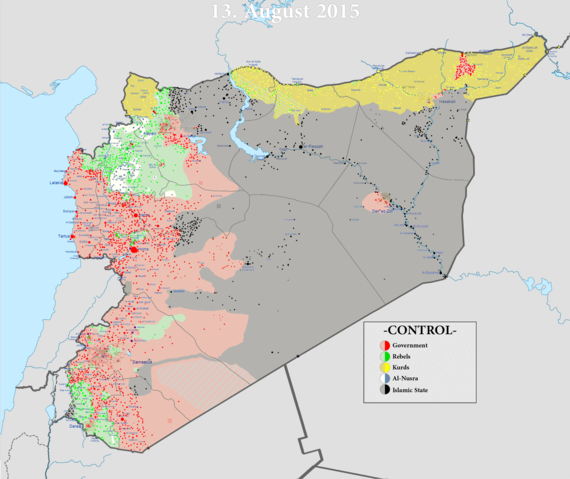 Some Kurdish groups have already declared this region to be autonomous from Syria, calling it Rojava. It is also referred to as Western Kurdistan to distinguish it from Eastern, i.e., Iraqi Kurdistan. To date, no government has officially recognized the independence of Rojava.

This "Kurdish Corridor" is a 250 mile stretch of territory along the Turkish border averaging about 50 miles wide running from the border of Iraqi Kurdistan to the outskirts of Jarablus on the west bank of the Euphrates River. Although the population of the region is approximately 40% to 50% ethnic Kurds, it also includes large numbers of Sunni Arabs and Turkoman. Both groups have been cooperating with the PKK in the campaign to expel Islamic State jihadists. Politically and culturally, however, they have little in common with the secular PKK.

The prospects of an autonomous Kurdish state in the region would raise fears of an ethnic cleansing of non-Kurdish inhabitants and would quickly disintegrate the nascent coalition. Islamic State propaganda has been quick to capitalize on those fears, warning Arabs in the region that they would be expelled from their homes if the PKK's plans for a "Kurdish Corridor" are successful. Unofficially, the Turkish government has echoed similar comments.

Within weeks of the recapture of Tal Abyad, Turkey announced that its air forces would join the U.S. led air campaign against Islamic State. In a statement issued on July 24, Turkish officials confirmed that following a telephone conversation between U.S. President Obama and Turkish President Erdogan on July 22, Turkey would allow American use of a number of air bases in Turkey, including the giant air base at Incirlik, to stage air operations against Islamic State targets in Syria. The use of these Turkish bases would reduce the air time of American air forces to their Islamic State targets to less than 30 minutes.

On July 24, three Turkish F-16 fighters struck Islamic State targets in the Syrian border town of Hawar Kilis. A few hours later, Turkish air forces struck positions in northern Iraq being manned by PKK forces. Since then scores of Turkish air attacks have been launched. A disproportionate number of those air attacks have been directed at Kurdish forces operating in Syria and Iraq.

Concurrently, Turkish government sources declared that Turkey and the United States had agreed to form an "ISIS free buffer zone" along the Turkish border north of Aleppo and that both governments had agreed that Kurdish forces would not be allowed to push west of the Euphrates River. In addition, there were widespread reports that the Turkish government was organizing a separate Turkoman militia force that it would fund and arm to use as a potential block to Kurdish forces.

The Turkish proposal for an "ISIS free buffer zone" would prevent Kurdish forces from potentially capturing control of the seventy odd mile strip of land north of Aleppo and along the Turkish border that would allow them to link up with Kurdish forces in Afrin. That link up would cement the final leg of a Kurdish corridor from Iraqi Kurdistan to the Mediterranean Sea. Not only would such a corridor be a critical element in the formation of a future autonomous Kurdish state but, more importantly, it would allow the direct export of petroleum from Iraqi Kurdistan via Mediterranean ports.

Significantly, Kurdish forces in northern Syria have disclosed that they were no longer receiving U.S. air support in its ground offensive against Islamic State forces in Jarablus. This city is the last major border crossing between Syria and Turkey still controlled by Islamic State and is critical to the flow of Jihadists into Syria as well as a key conduit for IS smuggling operations. The Pentagon has declined to either confirm or deny the Kurdish claim that they are no longer receiving American air support for operations west of the Euphrates River.

More concerning, however, is mounting evidence of past Turkish government collusion with Islamic State. On July 25, The Guardian disclosed that U.S. Special Forces had captured "hundreds of flash drives and documents" when, on the night of May 15-16, 2015, they had raided the compound of Islamic State's financial chief, Abu Sayyaf. The documents showed there had been widespread collusion by Turkish government officials in the smuggling of oil from Islamic State controlled oil fields in eastern Syria.

Stolen antiquities, another lucrative source of revenue for the Islamic State, were also being smuggled out of Syria with the tacit consent of Turkish officials. Indeed, it's possible that the highly publicized destruction of archeological sites in Syria and Iraq by Islamic State was nothing more than a cover for the systematic looting and sale of artifacts from these archeological remains. According to The Guardian, "direct dealings between Turkish officials and ranking ISIS members was now undeniable." Smuggled oil alone was responsible for generating between $1 million and $4 million a day in revenues for Islamic State. For now, the United States finds itself in a position where a key ally, Turkey, is effectively at war with the one ground force, the Kurds, that, when supported by American air power, have been the most effective in rolling back the Islamic State. The Turkish government has made it clear that given a choice between defeating Islamic State and forestalling any possibility of an independent Kurdish state along its southern border, it will opt to go to war against the Kurdish YPG and to tolerate the continued existence of the Islamic State. Under those circumstances is it any wonder that the Islamic State continues to survive?