CNN reports that a 7.2 earthquake has struck Eastern Turkey, making it the most powerful earthquake to hit the country in ten years.

The quake was felt in the provinces of Diyarbakir, Erzurum, Siirt, Mus and Agri, according to Bloomberg News.

The USGS reports a second earthquake of 6.0 magnitude, this time in Eastern Turkey.

ANKARA, Turkey — Cries of panic and horror filled the air as a 7.2-magnitude earthquake struck eastern Turkey, killing at least 88 people as buildings pancaked and crumpled into rubble.

Tens of thousands fled into the streets running, screaming or trying to reach relatives on cell phones as apartment and office buildings cracked or collapsed. As the full extent of the damage became clear, survivors dug in with shovels or even their bare hands, desperately trying to rescue the trapped and the injured.

"My wife and child are inside! My 4-month-old baby is inside!" CNN-Turk television showed one young man sobbing outside a collapsed building in Van, the provincial capital.

The hardest hit area was Ercis, an eastern city of 75,000 close to the Iranian border, which lies on one of Turkey's most earthquake-prone zones. The bustling city of Van, about 55 miles (90 kilometers) to the south, also sustained substantial damage. Highways in the area caved in and Van's airport was damaged, forcing flights to be diverted.

TRT television reported that 59 people were killed and 150 injured in Ercis, 25 others died in Van and four people, including a child, died in the nearby province of Bitlis. It said at least nine people were pulled out of debris alive.

Authorities advised people to stay away from any damaged homes, warning they could collapse in the aftershocks. U.S. scientists recorded over 100 aftershocks in eastern Turkey within ten hours of the quake, including one with a magnitude of 6.0.

Residents in Van and Ercis lit camp fires, preparing to spend the night outdoors while the Red Crescent began setting up tents in a stadium. Others fled to seek shelter with relatives in nearby villages.

Rescue efforts went deep into the night under generator-powered floodlights. Workers tied steel rods around large concrete slabs in Van, then lifted them with heavy machinery.

Residents sobbed outside the ruins of one flattened eight-story building, hoping that missing relatives would be found. Witnesses said eight people were pulled from the rubble, but frequent aftershocks hampered search efforts. By late evening, some joy emerged as a ninth, a teenage girl, was pulled out alive.

Around 1,275 rescue teams from 38 provinces were being sent to the region, officials said, and troops were also assisting search-and-rescue efforts.

In Ercis, heavy machinery stopped working and people were ordered to keep silent as rescuers tried to listen for possible survivors inside a seven-story building housing 28 families, NTV reported.

Some inmates escaped a prison in Van after one of its walls collapsed. TRT television said around 150 inmates had fled, but a prison official said the number was much smaller and many later returned.

Many buildings also collapsed in the district of Celebibag, near Ercis, including student dormitories, hotels and gas stations.

"There are many people under the rubble," Veysel Keser, the mayor of Celebibag, told NTV. "People are in agony, we can hear their screams for help."

Nazmi Gur, a legislator from Van, said his nephew's funeral ceremony was cut short due to the quake and he rushed back to help.

"We managed to rescue a few people, but I saw at least five bodies," Gur told The Associated Press."It was such a powerful temblor. It lasted for such a long time,"

"But now we have no electricity, there is no heating, everyone is outside in the cold," he added.

Authorities had no information yet on remote villages but the governor was touring the region by helicopter and the government sent in tents, field kitchens and blankets.

The earthquake also shook buildings in neighboring Armenia and Iran.

In the Armenian capital of Yerevan, 100 miles (160 kilometers) from Ercis, people rushed into the streets in fear but no damage or injuries were reported. Armenia was the site of a devastating earthquake in 1988 that killed 25,000 people.

Leaders around the world conveyed their condolences and offered assistance.

"We stand shoulder to shoulder with our Turkish ally in this difficult time, and are ready to assist," President Barack Obama said.

"Israel shares in your sorrow," Peres said in a statement. "Israel is ready to render any assistance that may be required anywhere in Turkey, at any time."

The offer came despite a rift in relations following an 2010 Israeli navy raid on a Gaza-bound aid flotilla that left nine Turks dead. Greece, which has a deep dispute with Turkey over the divided island of Cyprus, also offered to send in a special earthquake rescue team.

Turkey lies in one of the world's most active seismic zones and is crossed by numerous fault lines. In 1999, two earthquakes with a magnitude of more than 7 struck northwestern Turkey, killing about 18,000 people.

More recently, a 6.0-magnitude quake in March 2010 killed 51 people in eastern Turkey, while in 2003, a 6.4-magnitude earthquake killed 177 people in the southeastern city of Bingol.

Istanbul, the country's largest city with more than 12 million people, lies in northwestern Turkey near a major fault line. Experts have warned that overcrowding and shoddy construction in Istanbul could kill tens of thousands if a major earthquake struck. 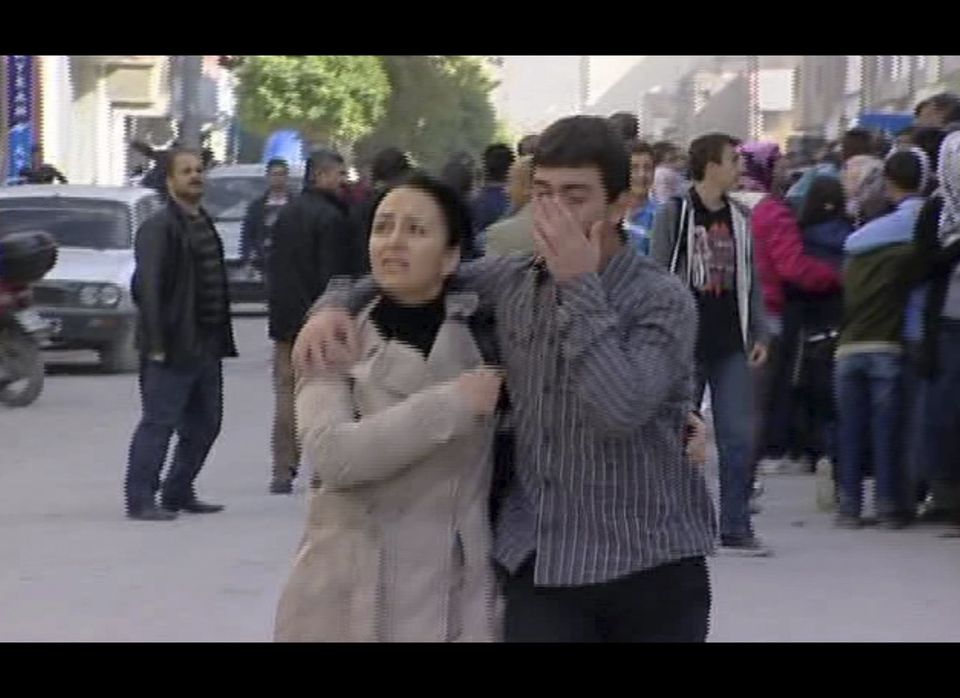 1 / 14
Residents take to the streets after a earthquake in Van eastern Turkey in this image taken from Sunday Oct. 23, 2011. Only one death was immediately confirmed, but scientists estimated that up to 1,000 people could have been killed. The worst damage was caused to the town of Ercis, in the mountainous eastern province of Van, close to the Iranian border. (AP)
AP