Would it have been better if the AKP hadn't won a majority in Turkey's elections Sunday? Based on the mood of those who don't support President Recep Tayyip Erdogan and the AKP, you would think so. But the truth is, it wouldn't have made much difference. Against Erdogan's authoritarianism, only relentless persistence and a true alternative will one day prevail.

The AKP won because Erdogan used two dirty weapons. One: violence against the Kurdish political movement, including the armed PKK. And two: authoritarianism.

He killed civilians in the Kurdish majority Southeast during day-long curfews and "operations," bombed the PKK in Turkey and in the Qandil mountains in Iraq, jailed democratically elected mayors, didn't do anything to prevent violence against offices and rallies of the HDP (the leftist party rooted in the Kurdish movement) and increased the pressure on newspapers not yet under his control. And it worked -- he won 49 percent of the vote.

Not that it has anything to do with democracy whatsoever, of course. The victory is soaked in suppression and blood. And the chance that Erdogan has had enough now is small. More media will be raided. Prime Minister Ahmet Davutoglu vowed to fight the PKK until the last man is standing, and Erdogan outright denied an agreement between the Kurds and the state reached earlier this year. The war rhetoric to gain votes didn't change to talk of peace after the majority was won back: Erdogan hurried to rant against the PKK in his first address after the polling stations closed.

The core of the Turkish state and of its constitution is that it protects itself -- not the citizens it is supposed to serve.

But if the AKP hadn't succeeded, what difference would it have made? There may have been coalition talks with the ultra nationalist MHP or the biggest opposition party CHP. The talks would have failed and only to lead to new elections in spring next year. Or the coalition for sure would not have survived until the next elections in 2019. The secular CHP and religious AKP, after all, represent strongly opposing groups in society. AKP and MHP are both nationalist and religious so their coalition may have lasted longer, but only with more violence and an end to any talks with the PKK -- MHP set that condition clearly after the previous elections.

So, was all resistance against the AKP futile to begin with? No, it wasn't. Erdogan didn't introduce authoritarianism in Turkey. The country has never been democratic in its now 92-year existence. The core of the Turkish state and of its constitution is that it protects itself -- not the citizens it is supposed to serve. Davutoglu just vowed to change the constitution for the better but the party made that promise before and never delivered on it. Why would they, since it serves their interests so well?

What makes Turkey's authoritarianism, especially the AKP's, so hard to battle, is that it is covered with a thin layer of democracy. Elections are being held, the turnout is high, no wide range fraud was reported, four parties made it into parliament. But the campaign was all but democratic, given the government's violence, further control over the press and detention of opposition politicians.

What makes Turkey's authoritarianism, especially the AKP's, so hard to battle, is that it is covered with a thin layer of democracy.

Such a polished dictatorship can't be fought with most of the opposition groups that Turkey has to offer. For example, what qualifies as "opposition media" nowadays? There are the papers and TV channels tied to Fethullah Gülen, a U.S.-based religious leader who hardly ever speaks in public and denies being in politics at all but who was once Erdogan's close ally. And there's an ultra-nationalist pamphlet that just rants against Erdogan without any smart journalistic skill.

Even worse: none of the groups in society who feel represented by these media actually offer a solid alternative to the AKP. And that includes the biggest opposition party, CHP, which is divided between those who still believe in old-fashioned Kemalism, which invented state-centrism, and those who try in vain to be proper social democrats. No wonder they haven't been able to challenge the AKP in any way since the AKP won its first elections in 2002.

Smart, slick dictators like Erdogan can only be undermined by a party -- or better yet, a movement -- that is well-organized and persistent. Turkey has such a movement -- the HDP. Its roots go back some 40 years, when eyes were already wide open to the realities of the Turkish state. In those days, it was just a small group of rebellious women and men who later became known as the Kurdistan Workers Party (PKK), but over the years they have grown into an extremely well-organized, resilient and persistent mass people's movement with clear objectives (grassroots democracy, equality, pluralism).

Such a polished dictatorship can't be fought with most of the opposition groups that Turkey has to offer.

The HDP, the leftist party that emerged from this movement, joined the elections for the first time in June this year. Its predecessors were just focused on the Kurdish problem and had to run as independents to get around Turkey's 10 percent election threshold. But the HDP is a party for the whole of Turkey that passed the threshold easily with 13 percent of the votes. Sunday, it lost votes due to Erdogan's wicked ways and barely crossed 10 percent, but they are still in parliament. They and the mass movement behind them are there to stay.

HDP co-leaders Selahattin Demirtas and Figen Yüksekdag stated Sunday night that they would continue their struggle for democracy for all. And that's what they'll do, inspired by their democratic goal and undistracted by a will for power. This is the solid resistance that Erdogan -- and the state-centered system that supports him -- should be afraid of.

Turkey's Election Was Soaked in Suppression and Blood
erdog 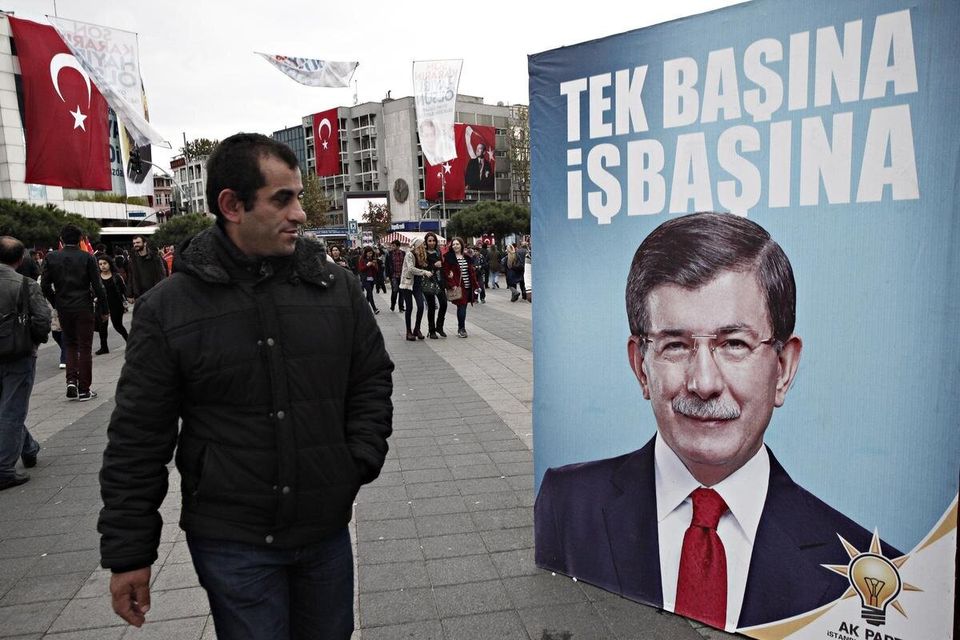